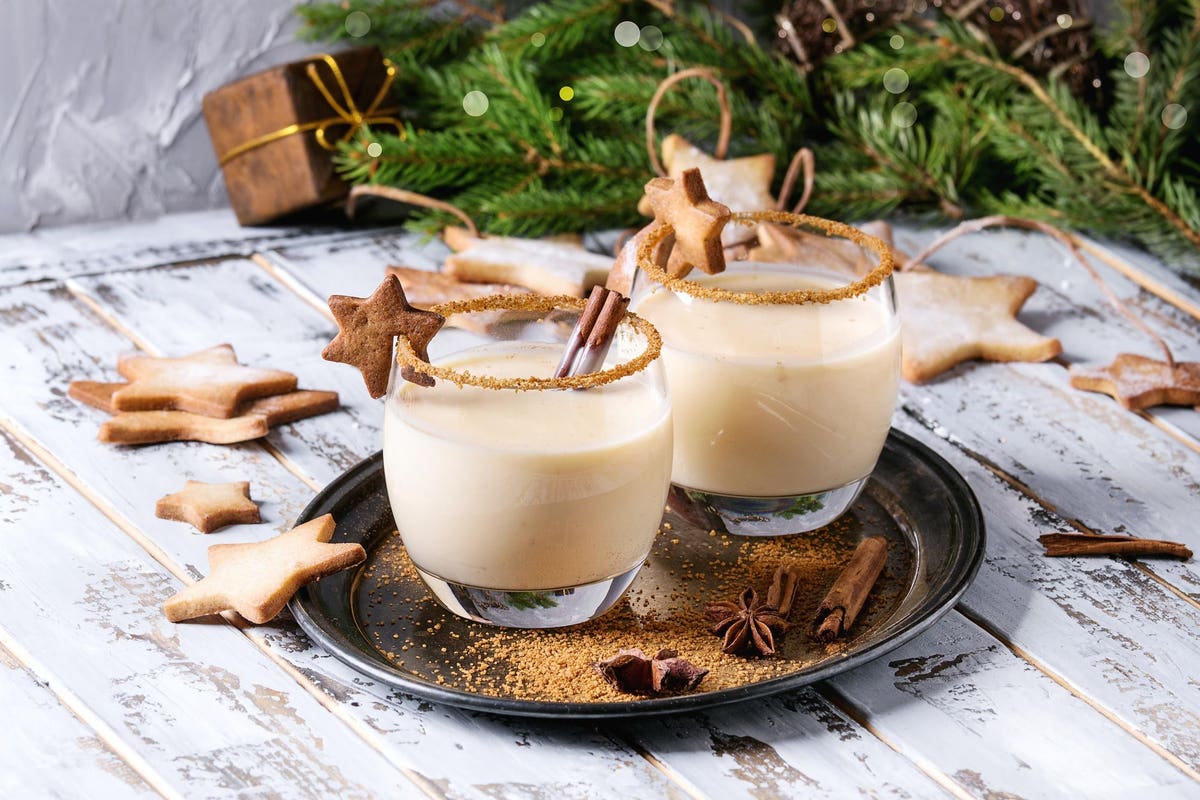 Like many delicious classics, eggnog is a recipe that’s made its way around the world and is never quite the same from place to place. This creamy, often alcohol-filled seasonal delight is said to have originated in England as a treat for the wealthy, and made its way to the Americas in the 1700s where it became a symbol of the holiday season. Over centuries eggnog has evolved and found its way into cultures all over the world. From traditional sweet Coquito fresh out of Puerto Rico, to Curaçao’s pistachio-flavored Ponche Krema, to Aruba’s Ponche Aruba featuring spiced rum and amaretto, eggnog is a holiday favorite around the globe.

Here are 10 festive eggnog recipes you should try this holiday season.

This classic eggnog is an old family recipe that Adam Couto, Chatham Bars Inn’s Master Mixologist, grew up on. He tweaked it a little bit to make it extra special by adding nutmeg and vanilla for the Chatham Bars Inn guests. It’s a festive holiday staple that everyone looks forward to.

Method: Combine milk, cloves, ½ teaspoon vanilla and cinnamon in a saucepan.  Heat on low for 5 minutes slowly bringing to a simmer. In a large mixing bowl combine egg yolks and sugar and whisk until smooth and fluffy. Whisk hot milk mixture a little at a time to temper the egg. Once most of the mixture is incorporated in the eggs transfer everything back into the saucepan. Cook over medium heat, always stirring for 3-5 minutes (do not let boil) or until the mixture reaches 160 degrees.  Remove from heat and let cool. Stir in spirits, cream, 2 teaspoons vanilla and nutmeg.  Refrigerate overnight. Serves 12.

There’s nothing like the holiday season in San Juan, Puerto Rico. The festivities begin on Noche Buena, or Christmas Eve where locals feast on authentic eats like pork, rice, beans and, of course, coquito. Meaning “little coconut” in Spanish, coquito is a traditional Christmas drink that originated in Puerto Rico and is a staple during the holiday season. Caribe Hilton’s claim to fame might be the invention of the iconic piña colada, but the property also serves a delicious coquito during the holiday season. Made with a creamy, coconut base and rum, it’s often referred to as Puerto Rican eggnog.

Method: Mix all ingredients together except the rum and slowly bring to a simmer, mixing constantly. Let cool until room temperature is reached and then add rum. Refrigerate for at least 4 hours and serve cold in a shot glass. Garnish with cinnamon sticks and cinnamon powder. Serves 10.

Curaçao’s blend of over 55 different cultures makes for a colorful, distinct, and unique holiday season. Locals take Christmas very seriously, with a big emphasis on family and large meals shared with loved ones. Every traditional Christmas dinner in Curacao includes Ponche Krema de Pistacho, a locally made pistachio eggnog spiked with rum. With latin influences hailing from Venezuela, just 50 miles away, local chef Désirée Da Costa Gomez’s Ponche Krema is made with sweet flan mix and traditional condensed milk. Meanwhile, the pistachio flavoring is unique to the Dutch-Caribbean island recipe.

Method: Add 2 cups of milk to the flan mix in a saucepan, stirring to keep the mixture smooth. Cook over medium heat, stirring constantly until mixture comes to a full bubbling boil. Remove from heat and let cool for about 15 minutes. In a blender, combine flan mixture, instant Pistachio Pudding and Pie Filling package, sweetened condensed milk, rum and vanilla. Blend until smooth. Pour the eggnog into a glass bottle and refrigerate until ready to serve. Shake well and serve over ice. Serves 4.

Created by Tracy Martin, Bar Manager for Saltwood Bar, the cocktail is Christmas in a glass. Light, delightful and a beauty to look at, the Peppermint Spice Eggnog Martini is the perfect balance of mint and nog. Traditionally spiked with rum or bourbon, this eggnog cocktail uses vodka to lighten it up, and uses peppermint schnapps for that extra dose of holiday cheer.

Method: Fill a cocktail shaker with ice. Add all ingredients to the shaker and shake it up. Rim a martini or coupe glass with crushed peppermint candy. Pour the eggnog cocktail into the glass. Garnish with a cinnamon stick. Serves 1.

Aruba’s signature holiday drink, Ponche Aruba, gives you all the festive feels in one sip. Comparable to eggnog, Ponche Aruba is the perfect cocktail to indulge next to a warm fire pit, a nice restaurant, or even at home. Made using just three main ingredients, Ponche Crema liqueur, spiced rum, and amaretto making this drink is fast, simple, and great for entertaining friends and family.

Method: Combine all ingredients in a large glass over ice. Garnish with grated cinnamon and a cinnamon stick. Serves 1.

This urban oasis in the heart of Panama City, The Santa Maria, Panama, a Luxury Collection Hotel is known for its fabulous Sunday brunch, which features Panama’s star holiday drink Ron Ponche. It’s made with Ron Abuelo, pasteurized eggs, condensed milk, cream and lots of cinnamon.

Method: Combine the condensed milk, whole milk, heavy whipping cream eggs and cinnamon in a bowl. Add the mixture to a pot over medium heat until it begins to foam. Remove mixture from the stove and let cool. Once cooled, stir in the Ron Abuelo and keep refrigerated until ready to be served. Serves 4.

Not your typical eggnog, this drink is a mix between Horchata (a Mexican rice milk drink typically served cold) and Arroz con Leche (a Spanish rice pudding dessert typically served warm around Christmas time). The warm Horchata rice drink pairs perfectly with egg tacos and began as a way to get the restaurant’s staff into a festive mood. It was such a hit that it’s now a fixture on the menu each winter.

Method: Combine water, rice, and cinnamon in a saucepan. Simmer for about 20 minutes until water is absorbed. Stir in milk and continue to cook for another 15 minutes. Discard cinnamon sticks. Serve hot or cold, and with rice strained or kept in. Top with cinnamon (preferably Mexican cinnamon). Serves 4.

In an effort to fight back on eggnog’s often bad reputation, Naughty List is made completely from scratch and shaken to order. This fun version is made with reposado tequila as its base, a touch of a cold brew liqueur from Mr. Black, and a bit of Amontillado sherry—because it’s naughty.

Originating from Puerto Rico, Coquito is an alcoholic beverage made with coconut and spices that’s very similar to eggnog. Every family has their own recipe, and Sergio Campos, food and beverage manager at Weft & Warp, was inspired by a recipe from his abuelita. His Coquito calls for house-made spiced rum, which is infused with raisins, cinnamon, orange, and vanilla bean.

Method: Mix in a blender and allow the mix to sit overnight in the refrigerator. Pour into a glass and shave a touch of nutmeg. Serves 8.

This festive holiday beverage combines Flor de Caña rum and brandy with eggnog, a dash of nutmeg, and a gingerbread cookie on the side for dunking. A classic holiday treat named after the restaurant serving it in San Francisco’s North Beach neighborhood.

Method: Measure out each ingredient into a mixing glass filled with ice. Shake for 5-10 seconds and strain into a snifter. Top with fresh grated nutmeg. Place on a plate with a holiday napkin. Add a gingerbread cookie on the side. Serves 1.