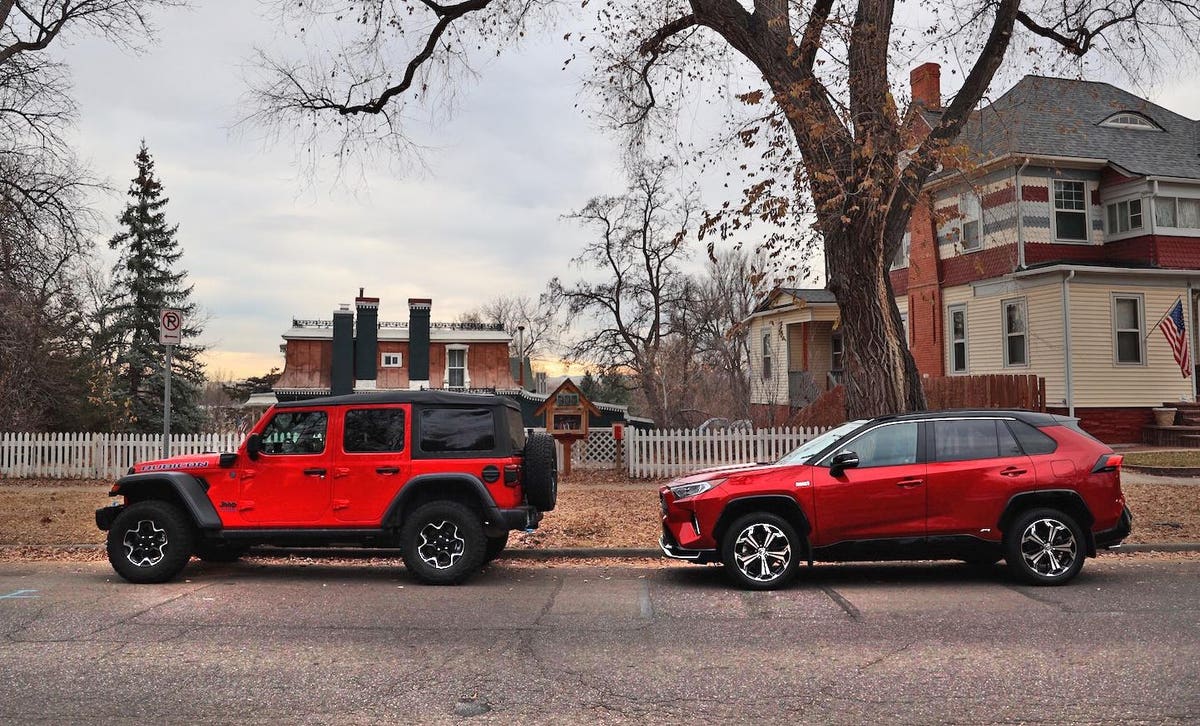 At first glance, it would seem that a comparison between the highly successful but not-ferocious Rav4 and the Jeep Wrangler, whose rough-tough, can-do heritage goes back to World War II, would be a mismatch. But aside from the removable top and the “let’s go off-road immediately” flavor of the Wrangler, the 2021 Toyota Rav4 Prime and the 2021 Jeep Wrangler Unlimited Rubicon had much in common.

I tested each vehicle for a week each, and each had its different strengths and weakness. Here are my findings.

The Wrangler is a Wrangler and of course it looks like one – it’s had the same basic visage for ages, and there’s nothing wrong with that. The Rav4, however, has undergone many stylistic changes in its time and the 2021 version is all angles and ruggedness. It looks nothing like, say, the 2009 Rav4, a tame-looking ride. Every time I came out of a store and saw my 2021 Rav4, it seemed to pop.

Powertrains: Wrangler The 2021 Wrangler 4xe has a 2.0-liter turbocharged I-4 assisted by two electric motors generating a total of 375 hp and 470 lb-ft of torque. The RAV4 Hybrid has a 2.5-liter I-4 engine and two electric motors, together producing 219 hp. It also has a continuously variable automatic transmission (CVT). My Prime had slightly more powerful motors and a bigger battery, but the Wrangler still posesses more oomph in the pedal.

The 2021 Jeep Wrangler is slightly wider and longer than the RAV4, a blessing for the big and tall. It also means if you’re a lousy parallel parker, you’ll do better with the slightly more compact Rav4.

Thought the Wrangler offers (slightly) more room in the rear for passengers, I could never quickly get the driver’s chair to do what I wished it to do, and it just wasn’t very comfortable. The Rav4 was comfy, plush (especially for its price) and didn’t fight me on seat position.

The Wrangler’s base ground clearance is 10.1 inches, and my Rubicon package gave the vehicle 3/4ths of an inch more height. The Rav4 prime clears 8.3 inches. These precious inches make a difference off-road.

You can see all around you, no problem, without relying on cameras/software. The Wrangler, not so much.

Handling: Rav4 Most (all) Wranglers wander all over the road and you have to keep a tight grip on the wheel, which of course isn’t a problem once you get used to it. The RAV4 has a smaller turning radius, too, a benefit when doing U-turns.

This Jeep has “4Lo,” a gear ratio used for rock-crawling. It allows the electric motor to put its torque to full use, and will get you out of any reasonable jam where other SUVs falter.

Mileage: Rav4 My test Wrangler got an absurdly impressive (For the Wrangler) 49 MPG combined city/highway using both motor and engine, but the Rav4, using both electricity and gasoline, can return up to 94 miles per gallon according to the press materials I recieved. I drove and drove and drove in the Rav4, and still gave it back with half a tank of gas.

Winner: There really isn’t one. They are two different machines which appeal to a different sort of buyer. But both are top-notch, well-worth-it rides, and it was a fun match. I’d take either one of ‘em again, and I was sorry to see both go.