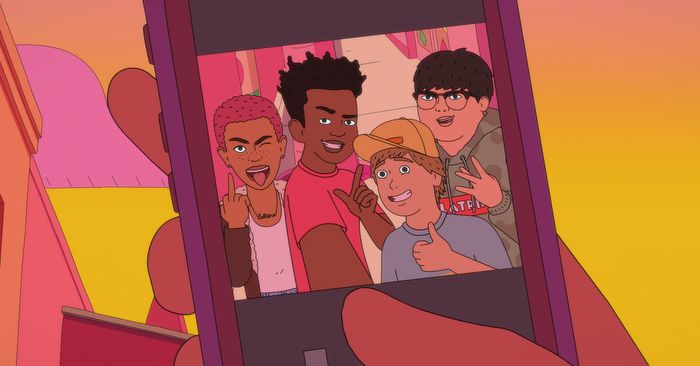 Fairfax is obviously not supposed to be a realistic portrayal of the world — at one point the four middle schoolers escape from an evil lair underneath a parody of the Supreme store (called Latrine) using a fidget spinner. But when it comes to depicting real-life online phenomena, things are even weirder. That’s because crafting a good narrative about the way the internet works is really, really hard.

An example: In the second episode, newcomer Dale must create an Instagram account and grow it to 100 followers in order to attend an exclusive “verified” party that his crush will be attending. To do so, he performs a series of increasingly cruel-slash-dangerous pranks (think throwing pizza in people’s faces) under the handle @BigPeenz, then inevitably turns into a pompous, self-obsessed influencer that his crush, naturally, hates. It’s meant to be a commentary on the shallowness of clout culture and the importance of being yourself, but because it’s a sitcom, when Dale finally has his comeuppance as the target of another influencer’s prank, he immediately loses all his followers. Which, of course, doesn’t make any sense: If anything, a “viral” moment like that would have made him an even bigger deal.

It’s not entirely the writers of Fairfax’s fault: The “going viral” scene in TV and film is almost always either extremely unrealistic and/or confusing — the way Hollywood portrays this experience looks absolutely nothing like the real thing, despite the fact that practically every kid in America knows someone who’s gone viral on some platform or another.

Consider the recent teen Netflix romcom He’s All That, a gender-swapped remake of the 90’s classic that stars viral TikTok influencer Addison Rae. In the film’s inciting incident, Rae’s character Padgett, a beauty YouTuber, goes accidentally viral during an embarrassing livestream and loses a crucial endorsement deal all because of a snot bubble — which, again, in the real world would likely only generate more attention. Later, she attends an exclusive party, where her performance of “Teenage Dream” again goes viral, this time for the right reasons (she’s being herself!) and immediately gains hundreds of followers.

Or consider Dear Evan Hansen, the musical-turned-movie in which the titular hero gets caught in a lie and then capitalizes on it by creating a suicide prevention group that goes viral. While the musical version manages to achieve this relatively believably, to the extent that theatre audiences must already suspend their beliefs to watch a live play in myriad other ways, the film does not. Betches described the bizarreness of the viral scene thusly: “We’re supposed to believe that Evan fell in the middle of the stage, then stood up and delivered a spoken performance powerful enough to get the attention of people around the world? In the real world, this might have gone ‘viral’ in a local moms Facebook group, but that’s about it.”

I could think of only a single example of a piece of media that showed a realistic portrayal of what “going viral” is really like. In the 2017 Netflix mockumentary American Vandal, the internet is used throughout the eight-episode series as a kind of Greek chorus for what’s happening at Hanover High School. When the in-series true crime documentary goes viral in episode five, the scale of virality is relatively small: the video gets hundreds of thousands of views, and the local prank group that was featured in the video sees their YouTube subscribers go from 250 to 700. It’s a far more realistic sense of scale, and the end result of going viral is what happens most of the time, which is to say, practically nothing.

I asked the show’s creator, Tony Yacenda, how his team pulled it off. “I think the biggest thing is that the virality should be the byproduct of a story beat, and not a story beat in and of itself,” he said. “[If] your characters do X, Y, and Z, the most logical conclusion of these actions would be a ‘viral’ reaction from the public. That’s the best version. The pitfall is just writing a beat where ‘our characters go viral.’”

He said that where series and films go wrong is by misunderstanding the actual scale of viral moments, which are usually quite niche. “This may be because I’ve spent too much time on Twitter and Reddit, but it always bothers me when shows or movies exaggerate scale when they don’t have to,” he said. “With American Vandal, our going ‘viral’ was the kids getting their short documentary to get a ‘staff pick’ on Vimeo, get like, 100K views, and climb to the number-four video on Reddit. That specificity adds more in realism than inflated numbers would have in scope. I think audiences generally value realism more anyway. We could have written it to be three million views and a national sensation, but we’d be sacrificing realism for scope.”

Actor and comedian Jaboukie Young-White, who voices Truman on Fairfax, is often the de facto “internet expert” in writers’ rooms. He’ll get asked questions like, “Is this a thing?” by older colleagues, identifying the blind spots of people who didn’t necessarily grow up online. I asked him how film and TV could portray the “going viral” moment in a realistic way, and, he confirmed, it’s hard. “The algorithms change so much,” he said. “Like, going viral in 2016? Your life would change. Now the impact of virality is kind of diminished. It shifts every time something new goes viral.”

He said that on Fairfax, the focus wasn’t necessarily on the inner workings of the internet but how it made the characters feel. “I think what the show does a great job of is everything feeling so important but also being kind of inconsequential at the same time,” he explained. “That really is the heart of virality: something feeling so huge then also meaning nothing a couple of hours later.”

That reminded me of a different film whose portrayal of the internet felt almost painfully accurate: the 2018 film Eighth Grade, where we view the internet through the lens of an awkward, anxious adolescent girl named Kayla. Many of the film’s scenes show her scrolling through her phone, consuming the mundane posts of cookie-cutter influencers and her uninteresting classmates, and observing how differently Kayla acts in social situations (shyly) and alone in front of her webcam (upbeat and effusive, if still a little stilted).

Eighth Grade was generally a refreshing alternative to the way teenagers are typically depicted, which so often leaves them looking like either cartoonishly irresponsible adults, spending their time drinking, swearing, and being desperate for sex (see: Euphoria, Riverdale, any teen party movie ever made), or as some kind of inhuman alien species who use emojis as secret code and invent evil slang to torture their terrified parents (see: just about any article on Gen Z). Fairfax does fall on some of these stereotypes — the 12-year-olds are constantly cracking jokes about coastal urban millennial references (at one point Truman describes a party as “if Raging Waters fucked the SoHo House”). This is intentionally absurdist dialogue meant to entertain adults, of course, but as the AV Club notes, “The show’s social media understanding feels rooted in 2013, a simpler time when Instagram just wanted you to filter the hell out of your breakfast photos.”

I’ve been thinking about this a lot: How do you make a show, a book, or a film about online not feel stale by the time it comes out? How do you describe the feeling of communicating via the internet without spending far too long explaining the logistics of how each platform works? Should you use the names of the most recognizable social media companies so that people know what you’re talking about, or will that sacrifice the timelessness of the story? It’s a difficult thing to accomplish, and only serves to prove my undisputable opinion that the best piece of media about the internet is You’ve Got Mail.