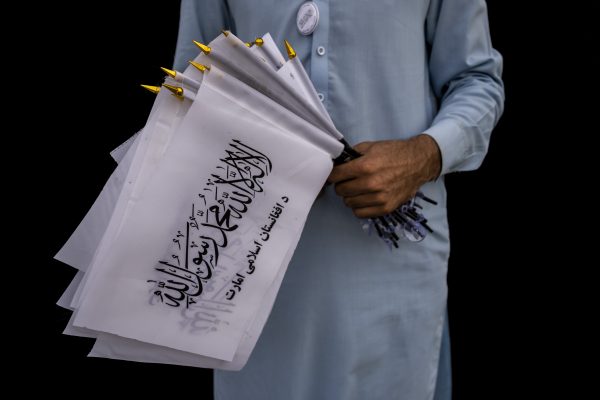 In August 2021, the Taliban took control of Afghanistan once again. It marked the end of 20 years of relatively democratic governance in Afghanistan. Since then, the Taliban have portrayed their government as legitimate in hopes of attracting international recognition and occupying Afghanistan’s seat in the United Nations.

In September 2021, the Taliban announced an interim government and tried to propagate a different image to the international community, claiming that they have changed in terms of their governance approach. They opened talks with several different heads of states. However, the Taliban has serious legitimacy predicaments both internally and externally. Internally, the Taliban have faced different waves of protests and resistance across the country, showing nationwide resentment to their rule. Externally, the U.N. Security Council passed a resolution in March 2020, declaring that they would neither recognize nor “support the restoration of the Islamic Emirate of Afghanistan.” This was reinforced by another resolution in August 2021 demanding an inclusive government and respect for human rights. All member of the UNSC as well as other states in different venues and meetings — despite pledging to provide humanitarian aid — have repeatedly vowed not to recognize the Taliban’s control of Afghanistan. This includes states which have conventionally or just recently, plainly or tacitly, supported the Taliban, including Pakistan, China, Russia, Iran, and Qatar.

Do the Taliban Meet International Law Requirements for Recognition?

The Taliban have claimed that because it has the control of “all borders, territory and major cities of Afghanistan,” and has formed “the government of people,” the group deserves an international recognition and Afghanistan’s seat in the U.N. The problem with this argument is two-fold: first, the effective control doctrine is neither sufficient nor even the principal condition for recognition or obtaining a seat in the U.N. Traditionally, international recognition requires meeting four conditions by a new government: (1) effective control; (2) popular support and domestic legitimacy; (3) permanency and stability; and (4) ability and willingness to fulfill international obligations. Secondly, the Taliban fall way short of internal legitimacy by any metric.

International law and practice have increasingly emphasized legitimacy of governments whether through elections, referendums, or some sort of public engagement. For instance, in 2013 when the Egyptian defense minister declared the end of the Mohamed Morsi government, the international community conditioned their recognition of any new government on holding immediate parliamentary elections. In 1974, the U.N. General Assembly practically suspended the representation of South Africa by its government due to its apartheid policies until the first democratic election was held in 1994.

The Taliban seized Afghanistan by force and have begun to ensure their control, not through elections or any similar means, but through extrajudicial killing, mass eviction of minorities, and torturing any dissident. Just a day after the seizure of Kabul by the Taliban, all members of the U.N. Security Council agreed that recognizing a government imposed by force was not an option since it would only encourage violent takeovers and toppling of legitimate regimes elsewhere. By any standard, the Taliban’s takeover has been more violent than the coup in Egypt and their governance has been as, if not more, violent than apartheid South Africa.

The Taliban did not hold any elections or referendums or even a Loya Jirga (a grand assembly traditionally used in Afghanistan to elect governments and ratify constitutions) to allow Afghans to voice their opinions about their government. The Taliban have repeatedly declared that they would not hold elections to form a government. Instead, the Taliban introduced a cabinet that is all-male, almost entirely ethno-religiously exclusive, and with U.N. listed-terrorists as ministers. Instead of recognizing the role of the women in government and society, the Taliban simply removed the Ministry of Women and replaced it with the Ministry of Amr Bil Maruf, which conducts religious and moral policing. The Taliban have continued killing former government employees and committing the crime of ethnic cleansing by forcing mass evacuation of mainly Hazaras — but also members of other groups — from their villages and towns in several provinces of Afghanistan.

The Taliban’s legitimacy has been challenged ever since they seized Kabul by continued protests, civil disobedience, and increasingly violent confrontations. Protests such as the continued flag movement, women rights protests, girls’ education strikes, anti-forced displacement rallies, public outcry in support of Panjshir resistance forces, and the emergence of anti-Taliban resistance in different part of the country have continued to defy the Taliban’s claim to absolute rule. While the Taliban captured Panjshir, the National Resistance Front has continued, and sporadic conflicts spread to other provinces. Recently, the resistance gained even more traction as a High Council of National Resistance of the Islamic Republic Afghanistan was formed.

The Taliban even fall short of meeting the requirements of the effective control doctrine, even in its classical meaning, because they have never been an independent movement, but a proxy used by Pakistan’s Inter-Services Intelligence (ISI). ISI’s control of the Taliban has been confirmed by countless reports and former international diplomats and military advisors in Afghanistan, including Christopher A. Alexander and Jason Criss Howk. Some former military figures in Pakistan, including Mirza Aslam Beg, former army chief, and Asad Durrani, former general director of ISI, have candidly affirmed their influence over the Taliban as their proxies. More scandalously, a recent leaked recording of a Taliban ranking member suggested that during General Director of ISI Faiz Hameed’s early September visit to Kabul he was deeply involved in the formation of the Taliban’s interim cabinet.

More importantly, how can the U.N. or any individual state possibly recognize a government in which there are several cabinet members, including the minister of interior, that are listed, and sanctioned as terrorists by the U.N. and several states. Since their takeover of Kabul, the Taliban has not abandoned its terrorist undertakings, nor has it cut ties with other terrorist networks. On the contrary, the group is on the verge of building a standing army of suicide bombers. Recently, they held an official parade of suicide bombers, and car bombs, while praising them on the state TV. In a subsequent event, they celebrated and rewarded the families of suicide bombers from the past 20 years in an official gathering at the Intercontinental Hotel in Kabul, the same hotel where they killed over 100 civilians in several attacks. Sirajuddin Haqqani pledged land, cash and more to the families of suicide bombers.

Earlier, the Taliban deployed several battalions of suicide bombers to the borders in case of war with neighboring countries. A June 2021 United Nations report revealed that the Taliban had not cut ties with al-Qaida, which recently congratulated the Taliban on their victory and called for the “liberation” of the rest of the Muslim world. Since the Taliban’s takeover of Afghanistan, the country has become an attractive destination for many terrorists. Recognizing the Taliban as a legitimate government and giving them a seat and a platform in the U.N. will certainly be another morale boost for terrorist organizations in Central and South Asia and the rest of the world to follow the Taliban’s path to power.

Does an Interim, Unstable Government with Unknown Supreme Leader Qualify for Recognition?

When the Taliban regime collapsed in 2001, NATO and Afghan forces controlled almost the entire population and territory for first few years until the Taliban reemerged. Now, the Taliban claim control over all the territory of Afghanistan while establishing an interim government. In 1996, Taliban created an interim government as well, which eventually fell and never led to a permanent Taliban government. Given their exclusive, top-down, and violent governance approach, the stability of the Taliban’s government is not quite guaranteed despite their seemingly wide presence across the country. Additionally, the Taliban are failing in the most basic government functions. They are not even able to pay the salaries of government employees let alone offer other public services. Very recently, the Taliban have announced that they will pay wheat in exchange for labor, which some have humorously referred to as the return of the “economy of Joseph” — referring to a drama about the period of prophet Joseph, during which labor was paid for with goods, including wheat.

Furthermore, another challenge to the recognition of the Taliban and their seat in the U.N. is the fact that the group’s supreme leader has remained so mysterious that none can really confirm his existence or death. This is very important for the recognition since their supreme leader is the sole authority and the absolute embodiment of the totalitarian movement. Although recently the Taliban claimed that their supreme leader had made a speech in Kandahar, it was only confirmed by Taliban members, there are no pictures of it happening, and they only produced a barely audible audio recording. This is not new to the Taliban as the first emir of the Taliban, Mullah Omar, was supposedly issuing letters and orders to the group for over two years after his actual death. Apparently, only those in the closest circle to Mullah Omar and among the ISI ranks were aware of his death and the charade that obscured it. This raised a yet unanswered question as to who really led the movement’s violence in Afghanistan. How can the international community recognize a totalitarian regime whose absolutist ruler is not even identifiable?

Do the Taliban Have the Ability and Willingness to Fulfil International Obligations?

Afghanistan is a party to, and, therefore, bound by several important international human rights laws, including the International Covenant on Civil and Political Rights (ICCPR), the International Covenant on Social, Economic and Cultural Rights (ICESCR), the Convention on the Elimination of All Forms of Racial Discrimination (CERD), the Convention on the Elimination of All Forms of Discrimination Against Women (CEDAW) as well as the Geneva Convention, the U.N. Charter, and the Rome Statute of the International Criminal Court. In yet another bold step, the 2004 Constitution endorsed the non-binding Universal Declaration of Human Rights (UDHR) as a domestic law and obliged the state to respect all rights therein enshrined.

What Does the Recognition of the Taliban Mean?