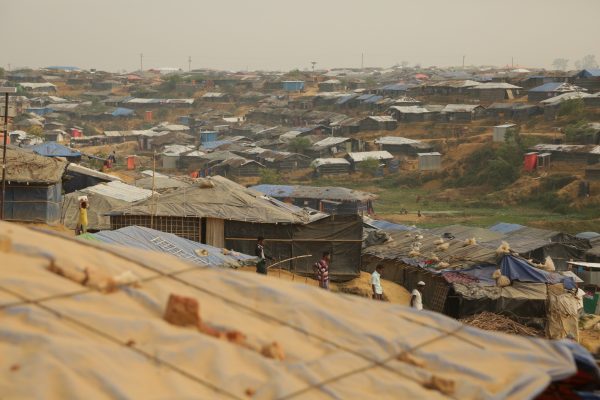 As years drag on without any positive developments regarding repatriation, the situation is worsening in the Rohingya refugee camps in Cox’s Bazaar, Bangladesh. Conflicts among the Rohingya are increasing and various illegal elements are finding their ways into the camps.

On October 23, six people were killed – stabbed and shot dead – in an attack in the camp. That grisly incident followed the murder of a top Rohingya leader, Muhibullah, who was killed in his office. Apart from these major incidents, other crimes are taking places in the camps almost every day. The number of illegal arms is increasing and the camps are being used as a new transit route for Yaba, an illegal drug combining methamphetamines and caffeine. Moreover, gang politics and shadow economies are also on the rise.

This is a toxic situation for one of the world’s largest camps, which shelters around 1.2 million refugees. The population density is jaw-dropping, at around 40,000-70,000 people per square kilometer.

Although from time to time Bangladesh steps up security and vigilance in the camps, periodic crackdowns have not solved the root problems, which lies not only in the camp management and security but also in the border situation.

The Rohingya camps are in Cox’s Bazaar, a border district of Bangladesh situated between Bangladesh and Myanmar. Bangladesh shares a 270-kilometer border with Myanmar. The border regions are mostly hostile and inaccessible due to the hilly terrain – but also poorly secured for the same reason. Geographically, the camps are very close to the border. That combined with the lack of alternative economic options has pushed some of Rohingya to take part in smuggling operations, leading to a rise in both transnational crime and the gangs that oversee such operations.

Recent incidents and reports show that the number of illegal firearms is increasing in the refugee camps. The home minister of Bangladesh also raised this concern in recent times. Often, these guns are being trafficked from Myanmar. Moreover, deep inside the hilly terrain, small set ups are used to make firearms locally, which are finding their way into the camps.

As the numbers of guns increases, gangs are becoming stronger. At present, at least 10 Rohingya gangs – including the Munna group and Putia group – are active in the camp, engaging is crimes including rape, kidnapping, extortion, trafficking, and even murder. As gangs create parallel structures to dominate the camps, conflicts between rival gangs are widening. Moreover, due to the influence of gang rivalry and illegal guns, fights that break out over trifling matters sometimes lead to deaths.

Recent reports show that the rate of crime in the camps is increasing drastically. In the last four years, around 1,298 cases have been filed, and the breakdown shows an upward trend. In 2017, 208 cases were filed while in 2019, 263 cases were filed. In 2020, 184 cases were filed, a drop attributable perhaps to the pandemic. But in 2021, the number reached a new height: to date in 2021, 570 crime reports have been filed from the refugee camps.

The gangs are also engaged in drug trafficking. Gangs are operating profitable drug running businesses and are employing refugees in trafficking Yaba through the Myanmar-Bangladesh border, exploiting their expertise in cross-border movement. Previously, the Teknaf route was infamous for trafficking Yaba. But due to the Bangladesh government’s zero tolerance policy and vigilance, the old route has become difficult for traffickers. So the gangs have created an alternative route through Naikhyangchhari and the refugee camps. At present, according to local law enforcement, almost 80 percent of Yaba that enters Bangladesh now uses this route. Almost 70 percent of these Yaba pills are being stored at the camps first, and then they are distributed through various channels across the country.

Apart from drugs, other valuable goods such as gold are also being trafficked by these gangs. Thanks to these illegal but enormously profitable activities, a shadow economy is on the rise benefitting the criminals.

Apart from these regular criminal activities, the Arakan Rohingya Salvation Army (ARSA), a violent insurgent group based in Myanmar, is also finding its way into the camps. In recent times, ARSA affiliates have become active in the camps. They are also engaging in conflict with other armed gangs over controlling territory within the camps. ARSA has been suspected as being the culprit in several violent incidents, including the murder of Muhibullah and the October 23  killings.

Like the gangs, ARSA and its affiliates are also accused of committing crimes such as kidnapping, extortion, looting, hijacking, and so on. They are also benefitting from the existing shadow economy in the camp. However, ARSA’s activity is very suspicious in the sense that, since the exodus, it has become increasingly indifferent to its Myanmar-facing insurgency model. Rather, it is only interested in using intimidation and fear to serve personal interests of its members, challenge the repatriation process, and destabilize the camps.

As a result of the vicious nexus between criminal gangs and refugee camps, the overall situation is quickly deteriorating and a “wild, wild west” is emerging. It is not uncommon for gangs and armed groups to exchange bullets with local law enforcement.

Stepping up security and vigilance in the camp and border area might come to mind as the solution, but it is not a panacea. Maintaining high security and vigilance indefinitely is a difficult task – and there would be no end in sight, as the ultimate solution, safe and sustainable repatriation of the Rohingya, is still a distant dream. A long-term effort would require logistics and financial support, and would seriously test Bangladesh’s capacity.

However, in the short term, stepping up security is an effective measure, and indeed Bangladesh has previously launched many anti-crime campaigns. But due to frequent cross-border movement and the prospect of safe haven beyond the border, crime remains a recurring issue. When Bangladesh tightens security, criminals can simply take refuge beyond the border. After a while, they come back and gear up their operations again. Hence, Bangladesh has to face these issues over and over again.

These activities have ignited a vicious cycle that effects both the camps and the general border area, which can be understood as the “camp-border nexus.” Activities by the criminals further destabilize the border areas, and in return, a destabilized border region allows illegal activities to take place more frequently and more openly. And that again further deteriorates the camp situation, leading to more violent crime.

This camp-border nexus plays an important factor in the refugee camps’ overall stability. Stepping up security and securing the border can play important role in solving the issue, but in the long run, the nexus must be addressed. An unstable border area and refugee camps pose security concerns – not only for the Rohingya refugees, but also for the whole country in many aspects. For instance, Bangladesh is already affected by the Yaba influx and is also losing economic benefits that would result from a stable border between Bangladesh and Myanmar.

Therefore, until the day repatriation can begin, Bangladesh must acknowledge the camp-border nexus as an important factor in its policymaking. In order to address this factor, relocation of the camps could also be an option to consider. Bangladesh is already in process of relocating 100,000 Rohingya refugees to Bhasan Char, where any connection with transborder criminal gangs will be harder to sustain. But above all, efforts need to focus on quick repatriation to end the problems for once and for all.