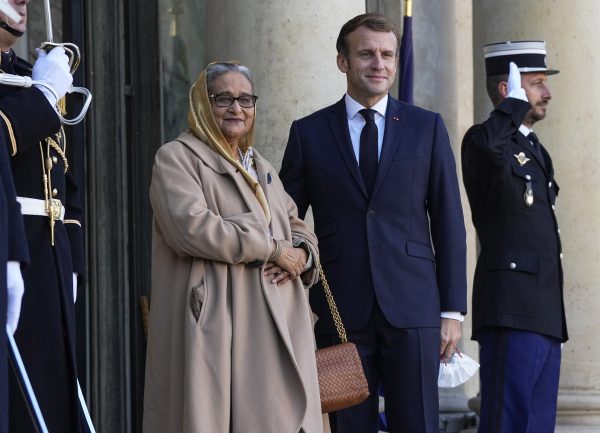 Prime Minister of Bangladesh Sheikh Hasina Wazed, left, is welcomed by French President Emmanuel Macron at the Elysee Palace in Paris, Tuesday, Nov. 9, 2021, for bilateral talks on the sidelines of the Paris Peace Forum summit.

Bangladesh’s Prime Minister Sheikh Hasina is in the middle of a visit to France, set to last from November 9 to 14. It is Hasina’s second visit to France, following her first trip in 1999. During her time in France, Hasina has met the French president, prime minister, and defense minister. According to the foreign minister of Bangladesh, through this visit, Dhaka aims to take the relationship to a new height.  To do that, both Bangladesh and France will have to increase their socioeconomic and political cooperation.

Bangladesh-France relations date back to the 17th century, when French merchants came to Bengal. In the Battle of Plassey, the French fought side by side with the last sovereign of Bengal, Siraj-Ud-Daulah. After Bangladesh’s independence, both countries have been largely on good terms. Relations were further bolstered with the signing of the Cultural Cooperation Agreement in 1987. In the 1990s, then French President Francois Mitterrand visited Bangladesh. After that, French cooperation helped Bangladesh with dam projects and flood management in the 1990s. In 1999, Sheikh Hasina became the first Bangladeshi prime minister to visit France. Between 1999 and 2021, several ministerial level visits also took place between the countries.

More recently, however, ties were marred by furious mass protests against France in Bangladesh, following comments seen as Islamophobic by French President Emmanuel Macron, who refused to ban cartoons depicting the Prophet Muhammad. Up to 40,000 people joined in a march targeting France and calling for a boycott of French products. Notably, Hasina’s government rejected the protesters’ demands, and her current visit can be seen as a bid to move ties past the incident.

Economic relations have flourished between Bangladesh and France over the decades. France is one of the largest export destinations for Bangladesh, which mostly exports ready made garments (RMG) to France. Meanwhile, France exports food products, electrical equipment, and chemicals to Bangladesh. By 2020, bilateral trade was worth 2.76 billion euros. Bangladesh’s export to France accounted for 2.52 billion euros of that, while French exports to Bangladesh were just $250 million. However, the figures for 2020 were down 15 percent from 2019, due the impact of the pandemic.

The two countries’ economic ties go beyond bilateral trade. For instance, in 2020 France provided COVID-19 loan worth 150 million euros to Bangladesh. Besides the COVID loan, France also has a green and inclusive growth project worth 367 million euros in Bangladesh. Apart from that, various French investments are taking place in Bangladesh, including a 275 million euro in a water production plant in Narayanganj and the Lafarge-Surma cement factory, which cost $253 million. Last but not the least, a cooperative non-profit effort between France’s Danone and Bangladesh’s Grameen is dedicated to ending malnutrition for the people of Bangladesh.

Besides such investments, Bangladesh and France also cooperate in the high-tech sector. Bangladesh’s first ever satellite, Bangabandhu-1, was made by the French company Thales. Moreover, Thales is also currently working in modernizing air traffic management in Bangladesh.

To take relations to a new height, both countries should strengthen their socioeconomic and political ties, extending cooperation in investments, cross-culture connections, and technology. Vast opportunities lie ahead for both countries in this regard.

France also has an expertise in high-tech products and defense hardware, both areas where Bangladesh has a demand. In particular, France has an impressive ecosystem for start-ups, known as “La French Tech.” High-tech and defense sales could be good options to consider for the French to overcome their current trade deficit with Bangladesh. Hasina’s meeting with the French defense minister, and the president of Dassault Aviation, suggests that cooperation in this aspect may be on the way, as there are already talks about France providing Rafale aircraft to Bangladesh.

Apart from economy, people-to-people contacts should also be increased to promote fraternity among the nations and, hopefully, prevent ugly incidents like the backlash against Macron’s comments. Cultural and information exchanges, scholarship programs, and startup projects should be launched. These programs would benefit both Bangladesh and France.

Deeper political relations can help both countries in achieving their objectives, especially in the Indo-Pacific region. Both countries are wary of the stalemate between the Quad and China going on in the region. France has its own Indo-Pacific strategy, and Bangladesh’s geopolitical location and emerging significance can also bring the countries together to achieve mutual benefits. Hasina and Macron’s joint statement mentioned that “France and Bangladesh shared the same vision for a free, open, peaceful, secure and inclusive Indo-Pacific region, based on international law and with shared prosperity for all.”

This latest visit will open up new paths for increasing cooperation and taking Bangladesh-France relations to a new height. That will be beneficial for both countries, considering the changing geopolitical realities and economic objectives. Therefore, Hasina’s ongoing visit will be a crucial one for both countries in their bilateral relations.