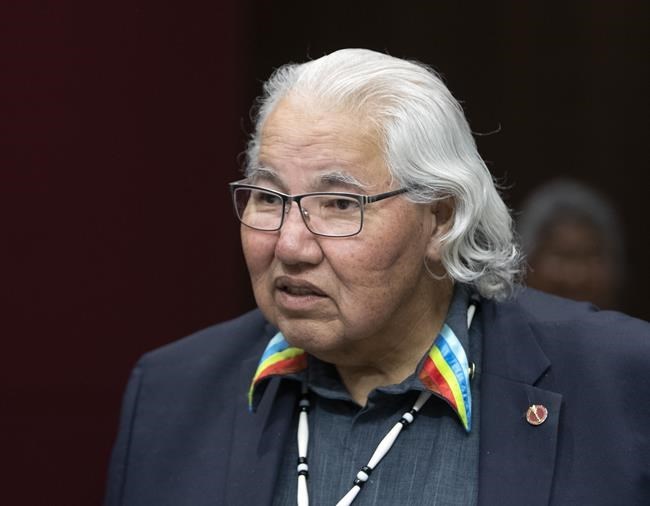 In The News is a roundup of stories from The Canadian Press designed to kickstart your day. Here is what’s on the radar of our editors for the morning of Nov. 11 … What we are watching in Canada …

In The News is a roundup of stories from The Canadian Press designed to kickstart your day. Here is what’s on the radar of our editors for the morning of Nov. 11 …

The Truth and Reconciliation Commission of Canada’s former chairman will aide talks between the federal government and child-welfare advocates in hopes of securing an agreement to compensate First Nations children.

Murray Sinclair has been tapped by the Liberal government to chair discussions between the sides including lawyers representing plaintiffs in a related class-action lawsuit as they try to settle the matter outside of court by the end of December.

The one-time senator led the commission that spent from 2008 to 2015 investigating the experiences of thousands of Indigenous people sent to residential schools as children.

He is a highly respected voice on matters of reconciliation between Indigenous and non-Indigenous people.

During a Wednesday interview with The Canadian Press, Indigenous Services Minister Patty Hajdu said “I’m very optimistic that we’ll be able to have an agreed-upon solution in the time frame that we’ve set.”

She said it’s been made clear to the government negotiators that they are to be “solution-focused” in their deliberations.

Sinclair’s role in the talks comes after the Liberal government appealed a Federal Court ruling last month upholding orders for it to pay $40,000 each to thousands of individual First Nations children removed from their homes, as well as to some of their relatives.

The compensation stemmed from an earlier finding by the Canadian Human Rights Tribunal that Ottawa discriminated against First Nations kids by knowingly underfunding child and family services on reserves.

Advocates say this lack of funding led to families being needlessly separated, which caused suffering. The issue has gone on for years, with the original complaint of discrimination brought forward in 2007.

Canadians will return to cenotaphs and monuments across much of the country this morning to remember and pay their respects to those who fought and died in service of Canada.

This year’s Remembrance Day ceremonies will stand in stark contrast to last year when organizers discouraged people from attending in person because of the second wave of COVID-19.

Royal Canadian Legion spokeswoman Nujma Bond is expecting a return to some semblance of normalcy today, including at the National War Memorial in Ottawa, where people are being welcomed to attend.

Bond nonetheless says some restrictions and changes will be in place as COVID-19 remains a reality, with masks and physical distancing required for anyone planning to attend.

The Legion has also again cancelled the traditional veterans’ parade in Ottawa, which has in the past seen elderly veterans from the Second World War and Korea march alongside counterparts from more recent conflicts and operations.

But Bond says a special section will be set aside for veterans wanting to watch the ceremony.

The leader of the People’s Party of Canada has lost his defamation fight against a controversial columnist who repeatedly portrayed him as racist, misogynist and anti-Semitic during the run-up to the 2019 federal election.

Maxime Bernier’s defamation suit against political strategist and pundit Warren Kinsella was tossed out of Ontario Superior Court on Wednesday.

Bernier had argued that his reputation was damaged by Kinsella, whom he accused of acting with malice on behalf of Conservative party operatives who had hired Kinsella’s company, Daisy Consulting Group, to dig up dirt on the fledgling People’s Party.

But while he said some of Kinsella’s publications on social media and in mainstream newspapers were clearly defamatory, Justice Calum MacLeod ruled that Bernier had not proved that the harm to his reputation outweighs the importance of protecting freedom of speech on matters of public interest.

DETROIT — A judge in Michigan has approved a $626 million settlement for Flint residents and others who were exposed to lead-contaminated water.

The state is providing $600 million of the settlement after it was accused of overlooking the devastating risks of switching Flint’s water source in 2014 without treating the water to prevent contamination.

Flint managers appointed by then-governor Rick Snyder and regulators in his administration allowed the city to use the Flint River in 2014-15 without treating the water to reduce corrosion. As a result, lead in old pipes broke off and flowed through taps.

There is no safe level of lead. It can harm a child’s brain development and cause attention and behaviour problems.

Attorneys are seeking as much as $200 million in legal fees from the overall settlement. The judge left that issue for another day.

The deal makes money available to Flint children who were exposed to the water, adults who can show an injury, certain business owners and anyone who paid water bills. About 80 per cent of what’s left after legal fees is earmarked for children.

GLASGOW, Scotland — The world’s top two carbon polluters, China and the United States, have pledged to increase co-operation on climate action in a joint declaration at UN climate talks.

In separate news conferences Wednesday, Chinese climate envoy Xie Zhenhua and U.S. counterpart John Kerry said the two countries would work together to accelerate the emissions reductions required to meet the temperature goals of the 2015 Paris Agreement on climate change.

“It’s beneficial not only to our two countries but the world as a whole that two major powers in the world, China and the U.S., shoulder special international responsibilities and obligations,” Xie told reporters. “We need to think big and be responsible.”

“The steps we’re taking … can answer questions people have about the pace at which China is going, and help China and us to be able to accelerate our efforts,” Kerry said.

China also agreed for the first time to crack down on methane leaks, following the lead of the Biden administration’s efforts to curb the potent greenhouse gas. UN Secretary-General Antonio Guterres called the move “an important step in the right direction.”

The First World War officially ended on Armistice Day and hostilities ended at the 11th hour of the 11th day of the 11th month. More than 595,000 Canadians enlisted, of whom 422,000 served overseas. Following the Second World War, Armistice Day was changed to Remembrance Day, which commemorates all the Canadian men and women who died in the Boer War, two world wars, the Korean War and in other actions for the United Nations.

LONDON — Elton John has received one of the highest awards that can be bestowed by the Queen.

In an investiture ceremony on Wednesday at Windsor Castle, Prince Charles anointed the rock star and charity patron as a member of the Order of the Companions of Honour.

Current members include the Queen, British environmentalist David Attenborough, Canadian author Margaret Atwood and one of Britain’s greatest-ever athletes, Sebastian Coe. The group can only number a maximum of 65, excluding the sovereign, at any one time.

Introduced in 1917, the award recognizes people who have made “a major contribution to the arts, science, medicine, or government lasting over a long period of time.”

“I was quite taken aback when I got the letter to say that I’d received it because I know it’s, very few people get it,” John said after receiving the gold medallion with the inscription “In action faithful and in honour clear.”

John, 74, who was knighted by the queen in 1998, joined the Companions of Honour in the Queen’s honours list in late 2019 for his services to music and charity.

“I’ve had an amazing life, music has been my life, and I got this for music and for work for charity,” said John who was accompanied by his husband David Furnish. “So this is just a reminder that there’s more to do. More work to do for music, more work to do for charity and life is great — I’m so lucky.”

OTTAWA — An online training course for service-dog trainers to teach the animals to help veterans with post-traumatic stress disorder is getting funding from Health Canada.

The course, funded by the department’s substance use and addictions program, is designed to help trainers prepare service dogs for veterans, including those recovering from substance abuse.

Prof. Colleen Dell, an expert in animal-assisted interventions at the University of Saskatchewan, headed the team that designed the tool kit.

Her research has found that service dogs can significantly assist veterans with PTSD. But they are still in a minority of those receiving service animals.

“We have done a lot of research that shows that service dogs absolutely can help veterans,” Dell said.

Her research found that veterans with PTSD who were given a service dog saw their use of alcohol and illegal and legal drugs decrease, as did their PTSD symptoms. It also found that stroking a dog can “disrupt emotional overload.” Some veterans, too traumatized to leave the house, started going out to walk their dogs and began to socialize.

There are over 500 service dogs currently used by veterans in Canada, with more in training, Dell said.

The dogs are trained to comfort veterans, provide company and support, and wake them up from nightmares. Some are trained to steer veterans away from situations that could cause anxiety.

This report by The Canadian Press was first published Nov. 11, 2021