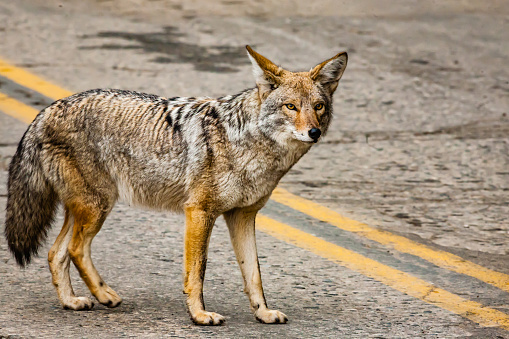 The City of Toronto says two people were bitten by what police called an “aggressive” coyote at a popular North York park on Sunday.

Investigators say the alleged incident happened around 1 p.m. at Bayview Village Park, just north of Sheppard Avenue, where a coyote was seen roaming in the area.

“Toronto Police are on scene as well as Toronto Animal Services, who are investigating the incident,” Li says. “What I have been told by officers that are in the area is that they’re encouraging and strongly recommending citizens to stay away from the Bayview Village Park area to avoid any further attacks from this coyote until they have the issue resolved.”

City officials say two people were bitten by the wild animal at the park on Sunday, adding that Toronto Animal Services and officers “have been in the area all day today working diligently to capture the coyote,” with efforts resuming Monday.

“The coyote is still at large, and the City advises residents in the area to please stay away from the park and use caution in the neighbouring areas,” a City of Toronto media spokesperson said.

Const. Li says it’s best that the public be aware of this search and “stay away from the area until we have things figured out.”

In a separate incident on Sunday, one concerned citizen posted on Reddit to issue a notice of their own following a coyote sighting at Sherwood Park, located east of York near Leaside.

“[I] was at the Sherwood Park off-leash this afternoon and saw two coyotes inside the fenced area,” the user wrote.

“They looked straggly and certainly on the hunt. I’d [advise] anyone walking through, or with their dogs, to be careful.”

It comes as surrounding areas and Toronto neighbourhoods deal with an influx of coyote sightings and reported attacks of late.

On Nov. 10, CityNews reported pet owners and parents in a west-end Toronto neighbourhood had been growing increasingly concerned about a pack of coyotes seen roaming nearby.

Residents living in the Jane and Dundas area say the animals have become a nuisance, adding that the issues had been recently intensified by someone leaving food out.

This follows a well-publicized attack in Scarborough in late July that saw a small dog attacked by a coyote in broad daylight.

The City of Toronto and the Toronto Wildlife Centre have said that while coyotes generally do not pose a danger to humans, pets are at risk.

Nathalie Karvonen, executive director at the Toronto Wildlife Centre, told CityNews in July that a human is more likely to be injured or die due to a dog or, in some cases, a cat bite.

The director of Toronto Animal Services says most coyotes don’t interact with humans but are more likely to do so if they are being fed.