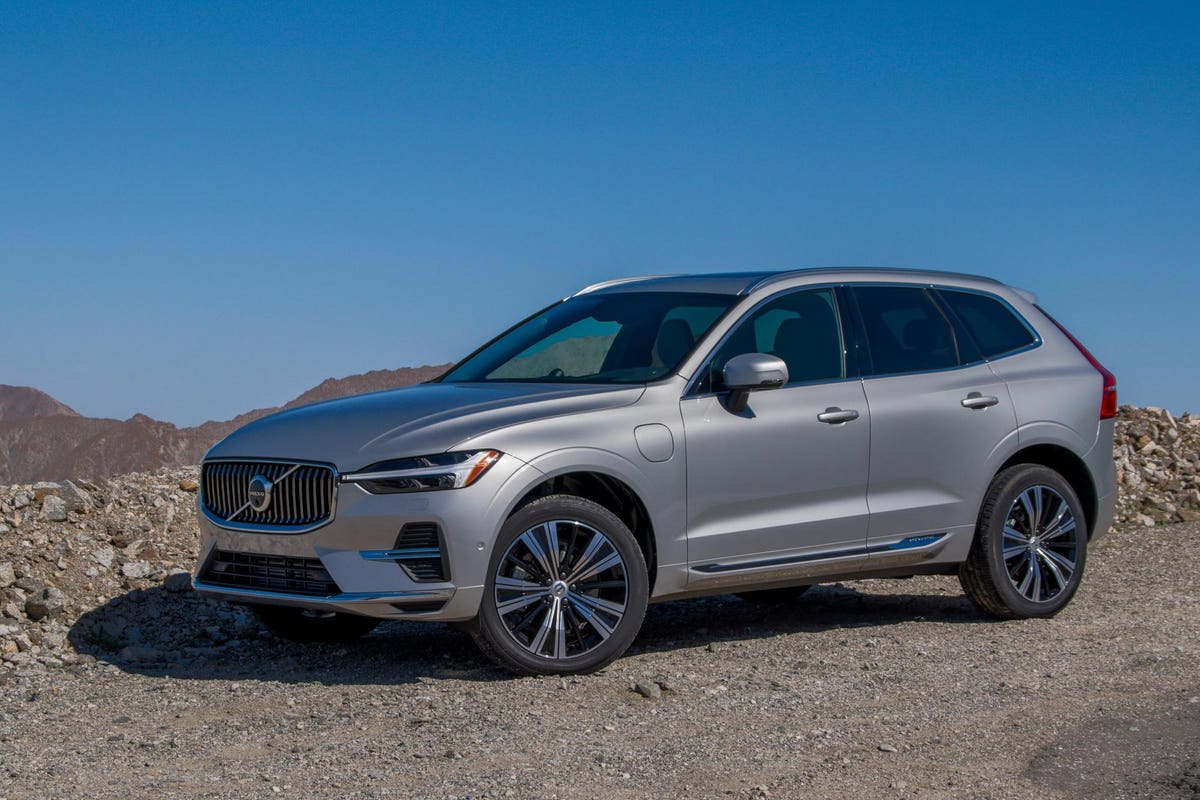 Over the past several years, Volvo Cars has set itself on a path to be an exclusively battery electric brand by the end of the 2020s. The company’s first step down that trajectory was the addition of plug-in hybrid models several years ago for its midsize and large 60 and 90 series vehicles. Like a number of other European premium brands, Volvo put more focus on performance enhancement than pure efficiency improvements. The efficiency came as a bonus. Halfway through the 2022 model year, Volvo has launched upgraded PHEVs that enhance both the performance and efficiency and we’ve had a chance to sample the extended range XC60 T8.

Visual changes to the refreshed XC60 are best described as subtle with a bit of recontouring of the fascia and an update of “iron mark” emblem to integrate the front radar sensor. There’s a bit more chrome below the lower air intake and in the corners, but nothing that’s really going to jump out at you.

Similarly, the biggest changes inside are newly available wool seat coverings which are attractive, hold you in place well during spirited driving and they stay cool in hot weather and warm in cold weather. The only potential drawback is for families with young children, who might want to opt for the leather upholstery that is easier to clean. Otherwise the layout of controls remains largely unchanged with a 9-inch portrait style touchscreen in the center stack, a large volume knob with a play/pause button below it and a generally clean, modern Scandinavian vibe.

The seats are comfortable and supportive regardless of which upholstery they have. While the seats don’t have 30-way power adjustment like a Lincoln, they have all the adjustments most people will need including thigh support extension for those with a longer run between hip and knee

The most notable interior change is the adoption of the new Android Automotive infotainment system that debuted on the electric version of the XC40 and the Polestar 2. It features Google Automotive Services including maps, Assistant and the Play store for downloading apps directly to the vehicle. Drivers can log into their Google account on the screen and have instant access to their preferences including contacts and personalized help from the Assistant. I didn’t log into Google, but did log into my Pocket Casts account and got access to my saved list of shows to listen to while I drove.

Those that are concerned about sharing data with Google don’t have to sign in but will still have access to services like maps. Obviously location and destination data has to be provided to Google to enable navigation, but it won’t be tied to any individual user. Volvo promises the addition of Apple
Carplay support via an OTA update sometime this summer. When using maps for navigation, the 3D maps are rendered in the digital instrument cluster and prompts are echoed in the heads up display. The system in the center screen is far more responsive than the previous in-house developed Sensus system ever was and starts up almost immediately. Android phone users will be familiar with Google Assistant which is capable of near natural language speech recognition and works reliably for everything from requesting media to play in an app to getting directions to just changing the cabin temperature.

Aside from the Google infiltration of the cabin, the really big news with the mid-2022 XC60 and its siblings is the powertrain for the T8 PHEV models. Previously, these were based on the T6 models which featured both a mechanical supercharger and an exhaust driven turbocharger for an output of 300-hp.

Volvo has updated that engine, replacing the supercharger with a 48V mild hybrid system using an integrated starter generator producing 312-hp. This improves the overall efficiency of the system and also enables much smoother restarts. Volvo’s hybrid architecture is what’s known as through the road. Instead of the electric drive being integrated into the transmission and blended as it is on most hybrids such as Toyotas, only the engine drives the front wheels as it would in a normal gasoline version. The more powerful ISG can restart the engine more quickly and with less shudder than a 12V starter motor. It also provides some electric assist to the engine, reducing the fuel consumption.

On the non-hybrid versions of this engine, Volvo is swapping the mechanical supercharger with a much more efficient electric supercharger that provides boost on demand without the constant parasitic losses of a mechanical unit. That version of the engine which will be known as B6 will be rated at 295-hp.

The other major change is to the battery pack which sits in the center tunnel. The overall package size of the battery is identical, but a third layer of lithium ion cells has been added, raising the capacity from 11.6 to 18.8 kWh of which 14.9 kWh is usable. That bump in capacity stretches the electric only driving range of the XC60 from 19 to 35 miles. For those that don’t feel the need to ride up higher than their peers, the lower-slung S60 and V60 with the same powertrain can get up to 41 miles on a charge.

When driving the Volvo PHEV with the transmission in drive, regenerative braking is mostly limited to when the brake pedal is actually applied, so the car coasts when the accelerator is released. For those that like one pedal driving as I do, another rearward tap of the crystal shift knob will engage maximum regen. Like many electric vehicles, the Volvo will bring the vehicle to a full stop without touching the brake pedal, a welcome change in urban stop and go.

Our drive route took us from Palm Springs Airport up into the mountains to the Coachella Valley Vista Point. The XC60, like most modern Volvos has a firm suspension that keeps body motions to a minimum but may transmit some information about the road surface to your backside, but not uncomfortably so. It’s definitely not plush, but those in more northern states might want to avoid late winter potholes. In Pure mode with only electric propulsion, the XC60 had no problem climbing the hills and keeping pace with traffic. On the way down, with one-pedal mode engaged, it recovered over four miles of electric range over a six-mile descent. In all, the XC60 got just shy of 40 electric miles before switching over to normal hybrid mode. In hybrid mode, the XC60 is EPA rated at 28 mpg, a very respectable number for a crossover with more than 450-hp.

Since about 2015, Volvo has been equipping vehicles with a driver assistance system called Pilot Assist. It provides lane centering functions combined with radar adaptive cruise control. Early versions were very limited and didn’t do a very good job of staying in the lane on curves. The system has gotten progressively better over the years and the system in the XC60 is the best iteration yet. This is a hands-on the wheel system but it did an admirable job of tracking even mountain curves.

The extended range XC60 Recharge is on its way to Volvo dealers now and should be available in the next couple of weeks. Pricing starts at $55,345 and thanks to the larger battery, it is now also eligible for the full $7,500 federal tax credit.