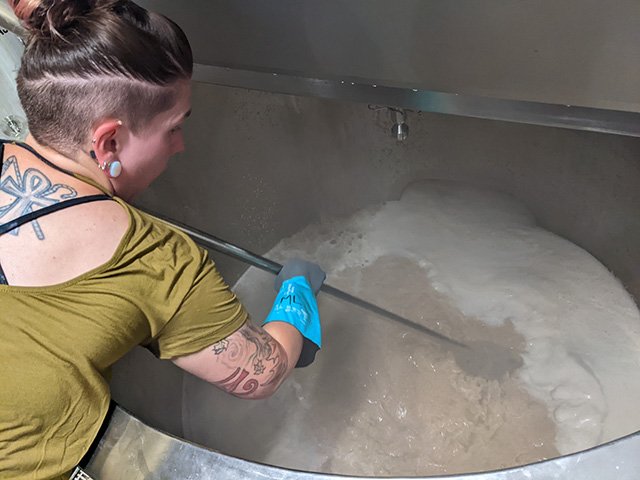 A beer worth front page attention this month is a hoppy hefeweizen called Above the Fold. The beer is a collaboration between Working Draft Beer Company and Isthmus to mark the paper’s one-year anniversary of its return to print after a 17-month hiatus due to the COVID-19 pandemic. The beer’s release party at Working Draft on Aug. 12 coincides with Great Taste of the Midwest pre-parties the night before the annual festival.

Above the Fold is based on a German hefeweizen (typically crisp and refreshing, with low hoppiness) with a 50:50 malt bill of wheat to barley before it’s fermented with a Bavarian strain of weisse beer yeast. “I’m a huge fan of the style and pretty picky when it comes to making one,” says Working Draft brewmaster Clint Lohman. “I like balance and for the malt character to shine though without being too sweet.”

Lohman adds a modern twist by using New Zealand-grown Riwaka hops. Hefeweizens are better known for featuring yeasty notes of clove, banana and bubblegum, and while you’ll find all that in Above the Fold, this new varietal of hops provides something unexpected. “Riwaka hops lend kind of a New Zealand funk with a lot of lemon, lime, kiwi, melon and other tropical fruity notes,” says Lohman. Look for the beer to be bubbly, light, crisp and easy to drink at 5.5 percent ABV.

Working Draft is known for collaborating with other breweries and organizations to call attention to community issues and causes. “Our special releases have been a major piece of the brewery from day one,” says Cary Jaworski, the brewery’s general manager.

Isthmus, which was founded in 1976 and operated as a weekly until March 2020, became a nonprofit media company in April 2021 and relaunched in print as a monthly in August 2021. Above the Fold is meant to mark “the rebirth of Isthmus and how it continues to be an important voice in the community,” Lohman says.

Publisher Jason Joyce and I helped brainstorm the kind of beer Working Draft would brew for Isthmus — the winning idea was a hopped-up hefeweizen that would turn Lohman loose with a modern craft beer hop, yet avoid the complex world of IPAs. It will be available in the Working Draft taproom at 1129 E. Wilson St., in select bars around the city, and in cans at several retailers. Working Draft will make a donation to Isthmus Community Media, a 501(c)(3) nonprofit, and a QR code on the cans will link drinkers to a website where they can support Isthmus’ community journalism mission.

The event at Working Draft is expected to be the brewery’s largest taproom release party in more than two years. The beer will be on tap all day, and beginning at 4 p.m. Isthmus staff and Lohman will be on hand to meet taproom visitors. Music will be from local group Dearly Brearly.

Other August beers to watch for

Goedt Bier from Giant Jones Brewing Company: Jessica Jones makes this historic Belgian-style ale with organic raw wheat and spelt from Meadowlark Farm of Ridgeway, Wisconsin. The beer is similar to a Belgian tripel, just a little lighter in body and with a touch of nutty, bready sweetness from the spelt. It finishes at 7.6 percent ABV (500 mL bottles $6-$7 each).

Reindeer Wrangler sahti from Parched Eagle Brewery: Owner Jim Goronson is of Finnish descent; this is a tribute to his heritage. The beer is made without hops. Instead Goronson adds juniper branches to the mash. This sahti is an amber ale that finishes around 7 percent ABV. It will be on tap for the brewery’s Great Taste Eve pre-party and remain on tap thereafter ($6/glass in taproom, $9/bombers, $12/howler and $18/growler).

Peter’s Treat at Starkweather Brewing Company: Brewmaster Peter Schroder has created this session red IPA for release around Aug. 11, his birthday. It’s made with Cascade and Idaho 7 hops, along with Canadian spruce tips that are added to the brew kettle. It finishes around 4.5 percent ABV. It should have the hoppy and resiny flavor of the Cascades with a piney bite of spruce at 43 IBUs ($6/glass in taproom).