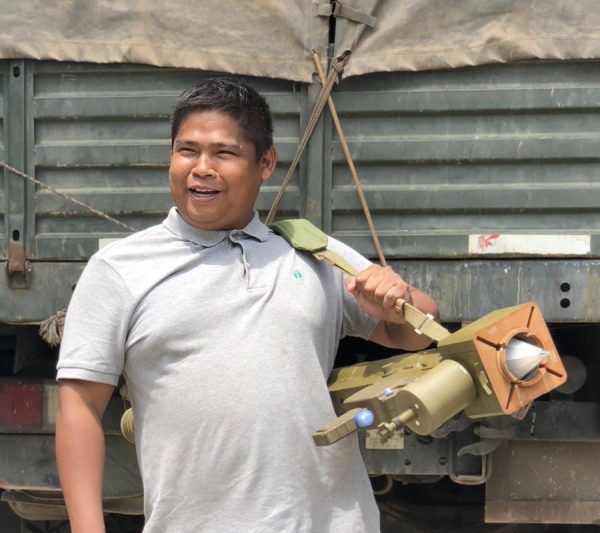 On the morning of September 16, around two months after intensive clashes resumed between the Arakan Army (AA) and the Myanmar military in northern Rakhine State, Bri. Gen. Dr. Nyo Twan Awng, the AA’s deputy commander in chief, shared a message to the Rakhine people through his social media accounts. The message described the return to war against the junta as “a final war and decisive war” for building “the state of the Arakan.”

The AA, the armed wing of the United League of Arakan (ULA), was formed by 26 Rakhine youths in April 2009 in Laiza, in northern Myanmar’s Kachin State, under the guidance of the Kachin Independence Army (KIA). In early 2015, the AA moved to Rakhine and began engaging in clashes with the Myanmar military in Kyauktaw township and Paletwa township in neighboring Chin State. Fighting escalated late in 2018 and raged until just before the national election in November 2020.

Just before the election, and three months before the Myanmar military overthrew the elected civilian government led by Aung San Suu Kyi in a coup on February 1, 2021, the AA agreed to an informal ceasefire in Rakhine, brokered by a Japanese peace envoy. After the coup, the AA initially avoided fighting in Rakhine, instead taking the opportunity to build up its military strength and extend its administration in the areas under its control. Six months later, the group claimed it had de facto control over two-thirds of Rakhine State, and to have 30,000 troops under arms, including at least 6,000 in areas controlled by its allies in Kayin, Kachin, and Shan states, as well as elsewhere in Myanmar.

In early June, the tensions between the AA and junta regime grew due after the military regime reinforced its troop presence across Rakhine State and the AA refused an invitation to take part in junta-brokered peace talks in the capital Naypyidaw. As the situation escalated, the deputy leader of the junta administration during a visit to Rakhine ordered his troops to be “ready to fight any time.”

Soon after, junta forces began arresting dozens of people affiliated with the AA in Mrauk-U, Sittwe, Kyauktaw, and Ponnagyun townships, blocked the gates of these towns, and conducted regular checks of hotels, guesthouses, and residences in search of AA/ULA members. The AA responded by arresting at least 20 junta personnel in the areas of Rakhine State under its control.

These tit-for-tat moves culminated in the military regime launching an airstrike on July 4 against an AA base in a territory controlled by the Karen National Union in Kayin State, close to the border with Thailand, killing at least six soldiers and injuring many others. Twelve days later, the AA launched a retaliatory attack against junta forces in northern Maungdaw township close to the Bangladeshi border, killing at least four, injuring many others and capturing at least 14 alive. Since then, a series of armed clashes have taken place across Rakhine, especially in northern Maungdaw township and neighboring Paletwa township of Chin State.

Based on local news reports and statements from the AA, the author has identified at least 18 locations in Maungdaw township, including 16 in the northern part of the township, that have seen clashes between the AA and junta forces since July 16. The AA has killed at least 100 junta soldiers and seized dozens of weapons while at least 36 junta outposts and camps in Rakhine and Paletwa township, Chin State have been destroyed,  including at least 31 in northern Maungdaw. Nearly 200 junta outposts and camps, including those of border guard forces, are estimated to have been stationed in Maungdaw alone, along with more than 8,000 troops directly commanded from a headquarters in Kyee Kan Pyin.

The AA also recently seized three tactical military camps, namely the Light Infantry Battalion No. 352 about three kilometers southeast of Jeitchaung village, a border police outpost nearby milestone 40 of the Myanmar-Bangladesh border, and Mee Taik station near milestone 37 of the Myanmar-Bangladesh border, two miles east of Taungpyo town. If the four remaining major Myanmar military camps were seized or overrun by the AA, the group could claim effective control over the entire township.

On August 23, the AA issued a statement, observing that “military tensions are escalating day by day and the theater of war is expanding in Rakhine,” and asserting that the junta has been mobilizing its troops and bringing in reinforcements and additional weapons. The AA also urged people not to travel near junta and border guard outposts and checkpoints, indeed, not to travel at all except in cases of life-threatening and health emergencies. It said that people should notify the relevant AA and ULA offices in advance if they need to travel.

Since clashes with the AA, junta forces have launched both airstrikes and heavy artillery attacks against the AA in a bid to take back their lost outposts and camps, and it has sent at least 800 additional troops to northern Maungdaw. Many of the residents who were arrested by the junta troops in the area are believed to have been used as human shields during attacks on nearby AA posts. Furthermore, the junta has warned Rakhine and Rohingya, as well as civilians of other ethnicities, to remain in their villages and to report on AA troop movements. They have also been warned nor to post anything on social media or record the movement of Myanmar military personnel.

During the fighting earlier this month, a number of mortar shells fired by the junta landed across the Bangladeshi border. Consequently, the Bangladesh government has issued at least three official protests to the junta-appointed Myanmar ambassador. On September 16, Myanmar mortars fell in Bindrabin District, Bangladesh, killing a 17-year-old Rohingya refugee  and injuring at least five others.

The recent fighting between the AA and the junta has meanwhile displaced more than 7,000 people in northern Rakhine, mainly people from Maungdaw. The military regime has blocked the United Nations and international NGOs from accessing the northern part of Rakhine State. Likewise, the AA also issued a statement, mentioning that all vehicles moving along rivers and roads in Rakhine State will be checked in line with the military’s needs.

There are a number of reasons why the renewed fighting in Maungdaw could have outsized strategic impacts for the AA’s long term ambition of creating “an independent Arakan.” To its east, the township borders Paletwa, Chin State, which occupies an important section of the Kaladan Multi-Modal Transit Transport Project, an infrastructure project which is being developed by the Indian government. The project will connect the eastern Indian seaport of Kolkata with Sittwe by sea, and then to Paletwa township via the Kaladan River, and then by road to Mizoram state in Northeast India.

On August 11, a ULA spokesperson said in an online press conference that the group had had some negotiations with the government of India on the Kaladan project. Two weeks later, Bibekananda Bhattamishra, India’s consul-general in the state capital Sittwe spoke at a meeting with Rakhine State-based businessmen, during which he mentioned that the road component of the Kaladan project was almost complete. Control of Maungdaw would put the ULA in a good position to engage openly with the Indian government over the Kaladan development, something that New Delhi would likely be unable to avoid.

Second, if the AA established its control over Maungdaw, the group might decide to cooperate with the United Nations experts investigating the massacres and forced displacement of Rohingya civilians from the region. Maungdaw was once home to around 750,000 Rohingya, who fled to Bangladesh after allegedly genocidal attacks by the Myanmar military in 2017. In September 2019, the AA sent two Myanmar soldiers who admitted to taking part in the allegedly genocidal killings of Rohingya families, including women and babies, to the International Criminal Court (ICC) at The Hague. The soldiers had been captured by the AA some months earlier. In October of that year, the AA and two allies issued a statement supporting attempts to prosecute the Myanmar military for abuses, including those committed against Rakhine State’s “Muslim minority.”

Finally, Maungdaw township is the main economic and trade conduit between Rakhine State and Bangladesh. Therefore, the AA’s attempts to control the township reflects its desire to engage openly with the Bangladesh government in border trade, and for the possible future repatriation of Rohingya refugees. Through both of these interactions, the group might build a good relationship with the international community – an integral part of its ambition of being treated as the region’s legitimate government. This week, the AA/ULA announced that it would cooperate in the repatriation of Rohingya refugees from Bangladesh, on the condition that  foreign governments recognize it as the legitimate government of Rakhine State.

For all of these reasons, the military junta will undoubtedly defend Maungdaw and fight fiercely to retake lost ground. But how long its remaining territories can be defended remains an open question. The Myanmar military is currently fighting a multifront war with the rest of the country ‘s resistance forces, creating an opportunity for the Arakan Army to establish its unchallenged control over Maungdaw – and notch a significant milestone on its path toward independence.