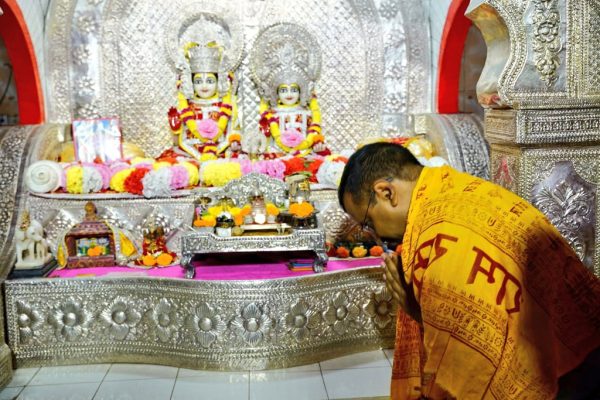 The Aam Aadmi Party (AAP) is gearing up to spread its wings beyond New Delhi. In a bid to appeal to Hindu voters, the party, which is running the Delhi state government, is indulging in explicit Hindu rhetoric and promising free pilgrimages to Hindu temples even as its leaders are on a temple-hopping spree.

A nine-year-old party, AAP emerged from the India Against Corruption movement that did enormous damage to the erstwhile Congress-led United Progressive Alliance government. Having won elections to the Delhi state assembly, it is now eyeing the states of Goa, Uttar Pradesh, Uttarakhand and Punjab, which will be voting in state assembly elections in early 2022.

Hitherto, AAP has drawn voters in New Delhi with promises of handouts such as free bus rides for women, free and subsidized electricity for those consuming up to 200 and 400 units per month respectively, free water for those consuming up to 20,000 litres a month, and full school fee waiver for children of economically weaker families. In addition, it has provided free Wi-Fi and promised free pilgrimage for senior citizens and waiver of development charges for new water and drainage connections. It has offered free medical treatment and test facilities as well as medicines in mohalla (neighborhood) clinics and free surgeries at empanelled hospitals. The government also bears the expenditure for the treatment of victims of road accidents and fire mishaps.

A party that is neither dynastic (like the Congress Party) nor driven by a religious ideology (like the Hindu nationalist Bharatiya Janata Party [BJP]), AAP began its political journey from the streets of Delhi, where its volunteers would accept even a rupee as donation from locals. It pioneered the crowd-sourced model of electoral fundraising in India with small donations contributing to running the party. With promises to clean up India’s corruption-ridden system and putting forward a model of alternative politics, AAP made its foray into electoral politics in 2013.

In the run-up to the Delhi state assembly election in 2020 AAP’s founder-chief and Delhi Chief Minister Arvind Kejriwal told a TV News channel that he was a “kattar Hanuman bhakt” (hard-core devotee of the Hindu deity, Hanuman), following which he recited the Hanuman Chalisa (a Hindu prayer to Hanuman).

Soon after AAP’s resounding victory in the Delhi elections, Kejriwal told his followers: “This is the day of Lord Hanuman who has blessed the people of Delhi.” Days later, on being re-elected Delhi’s chief minister, he paid a visit to a Hanuman temple.

Kejriwal’s articulation of Hindu rhetoric and his “Jai Hanuman” (Victory to Hanuman) slogans are aimed at not only matching the BJP’s long-standing “Jai Shri Ram” war cry but also, making Kejriwal and AAP more attractive to Hindu voters.

Kejriwal is using the tried, time-tested and successful Hindutva strategy to win elections.

Despite winning the Delhi assembly election on an anti-corruption plank, AAP is following a “soft Hindutva” electoral strategy and is also drawing on another resource that the BJP has successfully exploited: patriotism.

In Uttarakhand, AAP has named Ajay Kothiyal, a retired colonel of the Indian Army as its chief ministerial candidate. Announcing this at a press meet, Kejriwal said: “Kothiyal has been a true warrior who served the nation fighting Pakistan in Kargil war, and terrorists in Jammu and Kashmir without caring for his own life. He is a person who still lives with two bullets stuck in his body. He served the country when other political parties plundered Uttarakhand,” a dig at the BJP government in the state. Simultaneously, AAP is publicizing Kothiyal’s work in rebuilding the Kedarnath Temple in Uttarakhand.

In Punjab, AAP activists and supporters participated in a Tiranga Yatra, a procession where participants from across the state, carried Indian national flag and raised nationalist slogans such as “Vande Mataram,” another sign of its growing ideological proximity with the BJP’s idea of patriotism.

Previously, Kejriwal promised up to 300 units of free electricity for each household in Punjab, 24-hour electricity supply, and free treatment and medicines at government hospitals if voted to power in the upcoming assembly elections. On November 22, he promised cash transfers of 1,000 rupees per month ($13.2) to the account of every adult woman in Punjab. He urged women to give him and his party a chance to rule Punjab.

Freebies are being promised in Goa as well. Here too cash transfers have been promised, Kejriwal has described as the “world’s biggest women empowerment programme.”

Kejriwal has understood that his governance gimmicks alone won’t be enough to return AAP to power. Hence, he is drawing on BJP’s ideas and ideologies of Hindu supremacy and a skewered idea of patriotism.