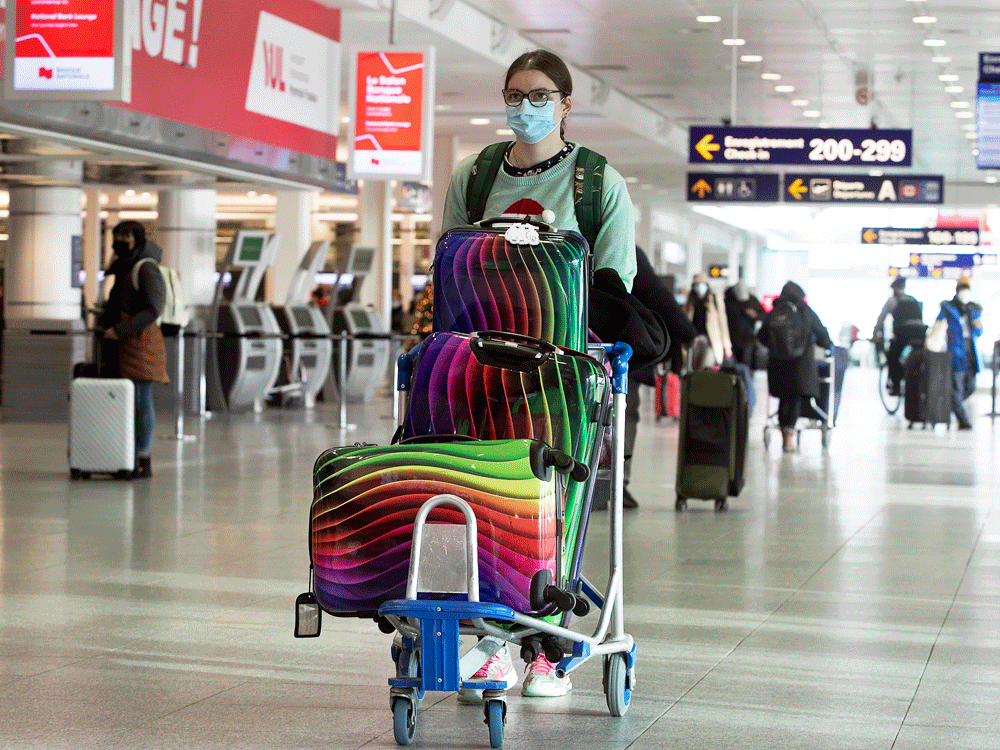 OTTAWA – Vaccinated travellers will no longer need a negative COVID test to get into Canada, but rules around masking and vaccines are staying in place for now.

The federal government confirmed Thursday the new rules will start April 1 and will mark the first time in two years Canadians have been able to travel and return without any testing or mandatory requirement.

Health Minister Jean-Yves Duclos said the country is past the Omicron wave and Canadians have done their part.

“We are in a much better position now in March 2022 than we were in March 2020. High vaccination rates and strong adherence to public health measures have pushed us through the peak of the Omicron wave,” he said.

Airlines welcomed the news. Suzanne Acton-Gervais, interim president and CEO of the National Airlines Council of Canada, said it will allow them to get back to more normal business.

“Today’s announcement will enable the aviation industry, which represents a major segment of the Canadian economy, to continue to take genuine steps toward recovery,” she said. “Supporting over half a million direct and indirect jobs, aviation’s revitalization will help stimulate the broader recovery of Canada’s economy.”

Many other countries have already eliminated the need for negative tests from vaccinated passengers.

Acton-Gervais said they heard from customers that the testing requirement, which can cost hundreds of dollars, was a major impediment.

“Canadian airlines have been among the many voices calling for updated travel guidance and protocols, guided by scientific evidence,” he said. “We have heard from our passengers how their travel decisions have been impacted by the costs and uncertainties associated with past testing protocols.”

Duclos said the government will continue to take public health advice on when other restrictions might be lifted, including vaccination mandates and masking requirements. There have been spikes in COVID cases in some countries around the world in the last few weeks.

He said they would monitor the data, but currently Canada is in a much better position than it was in early January.

“One out of 10 travellers in January entering into Canada was positive with COVID. That was significantly larger obviously than what we had seen in December and prior to that; that rate has fallen to about one per cent now,” he said.

Deputy Chief Public Health Officer, Dr. Howard Njoo said the pandemic improved disease surveillance systems here in Canada and around the world. He said he is confident they will have the data to keep watching for future possible outbreaks.

The government will continue to do random mandatory COVID testing at airports for returning travellers, as a disease surveillance measure, but passengers will not have to quarantine while awaiting a result.

Njoo said that measure, combined with hospitalization data and waste water data will help them keep tabs on any growth in COVID-19 cases.

Tourism Minister Randy Boissonnault said now is time for the tourism industry to get back to full speed.

“We did this because we know that the Canadian economy will not fully recover until our tourism sector recovers too and that recovery is now at hand,” he said.

Boissonnault argued Canada’s approach to COVID will be a selling point for tourists who can feel confident travelling here.

“With our high vaccination rates and our focus on health and safety, Canada has a huge advantage in attracting visitors because they know it’s safe to travel to Canada,” he said.