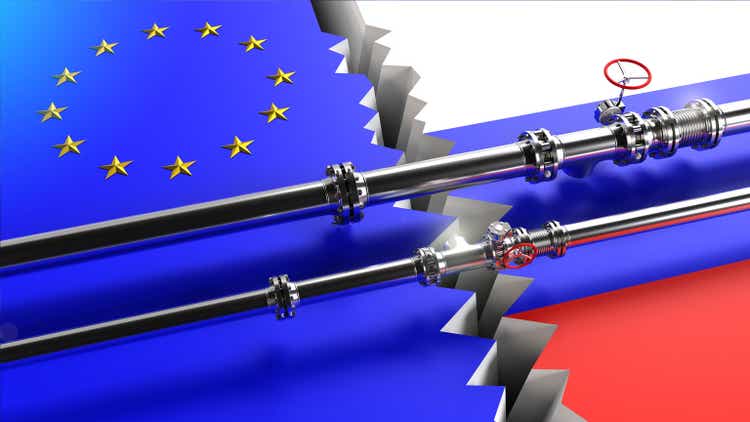 Antero Resources Corporation (NYSE:AR) stock has since fallen from its August highs after recovering remarkably from its July lows. We highlighted in our previous article that investors need to be cautious about adding AR, even though we posited it was at a near-term bottom.

Notwithstanding, AR has outperformed the market since our previous update, as it leveraged the surge in natural gas prices in Europe as its energy crisis worsened further. However, even though Henry Hub natural gas futures broke its June/July highs, AR’s upward momentum faced robust selling pressure. Accordingly, it has pulled back nearly 18% from its August highs, after failing to break above its previous highs in June.

Our analysis suggests that the market has justifiably de-rated AR, as the TTF natural gas prices have fallen dramatically. Furthermore, propane prices have continued to fall, even though management had anticipated in its Q2 earnings call that it would recover through winter. Also, WTI crude oil prices have continued to weaken further through September. Hence, we believe the market has focused on demand destruction as a potential global recession draws nearer.

As a result, we urge investors not to buy this Antero Resources dip and wait for the selling momentum to potentially re-test its July lows. As such, we reiterate our Hold rating on AR.

The World Bank updated in a recent September commentary that we may face the prospects of a global recession in 2023, given the rapid pace and extent of monetary tightening by central banks worldwide. Therefore, despite the energy crisis in Europe, we believe the market has de-rated energy stocks in anticipation of a global recessionary theme. Furthermore, Europe’s attempt to contain its energy crisis could lead to further consumption cuts, which could spur the energy bears in their demand destruction themes.

Also, recent data concerning China’s fuel exports indicate that China could be facing an excess gasoline supply. As a result, China’s downstream players doubled their gas exports in August from the previous year, as internal demand remains weak. Hence, we believe the expectations from China’s COVID reopening play need to be tempered, as economists remain gloomy over its GDP forecasts for 2022. Therefore, we believe global demand destruction risks that could broadly impact energy prices have risen further.

Investors should note that July’s spike in NYMEX prices was instrumental in helping Antero post an average of $7.67 per Mcf pricing (before derivative effects) in Q2. Henry Hub futures have fallen back to $7.87 after collapsing nearly 21% from their August highs. We believe that natural gas futures could fall further, with September 2026 futures priced at $4.57, adding further pressure. Moreover, Antero Resources’ long-term model suggests an average price of $5.26 between 2022-2026. Therefore, we are increasingly confident that Antero’s growth cadence should fall further moving forward, putting further pressure on its stock.

Furthermore, as the company winds down its hedges through 2023, a further downturn in the energy market could hit Antero harder than expected, leading to unexpected volatility in its operating profile.

The consensus estimates (bullish) suggest that Antero’s natural gas and NGL revenue could peak in FY22. Therefore, we believe the projected drop will likely put further pressure on its profitability growth.

Therefore, we urge investors to consider the significant moderation in its growth cadence, even though its margins profile is expected to remain robust.

Notwithstanding, we believe the company’s financial discipline in leveraging its massive free cash flow (FCF) generation to pay down debt rapidly should help support its valuation. As seen above, Antero could turn net debt neutral by the end of 2023, as management expects to drive nearly $10B in FCF through 2026.

Also, the company remains disciplined in its capital commitments, leveraging its FCF generation toward accretive shareholder value activities like buybacks and debt paydown.

AR last traded at an NTM EBITDA multiple of 3.7x, well below its all-time mean of 8.3x. However, we urge investors to consider our thesis that the market has likely de-rated AR, despite its seemingly low valuation.

As seen above, due to falling profitability growth, Antero’s adjusted EBITDA is expected to decline through FY24, impacting its EBITDA multiple. Hence, AR’s FY24 EBITDA multiple of 5.7x is much higher than its NTM metric.

Accordingly, we believe the uncertainties in its profitability profile have likely led to the market demanding for a higher margin of safety to account for these macro risks that are likely out of Antero’s control.

AR has fallen markedly from its June and August highs and formed a lower-high price structure in August. Therefore, we postulate it’s a significant red flag that investors need to consider that the market could be looking to digest its gains further.

Hence, we urge investors to be patient and wait for a potential re-test of its July lows, which could lend further clues into the market’s medium-term directional basis.

As such, we reiterate our Hold rating on AR.