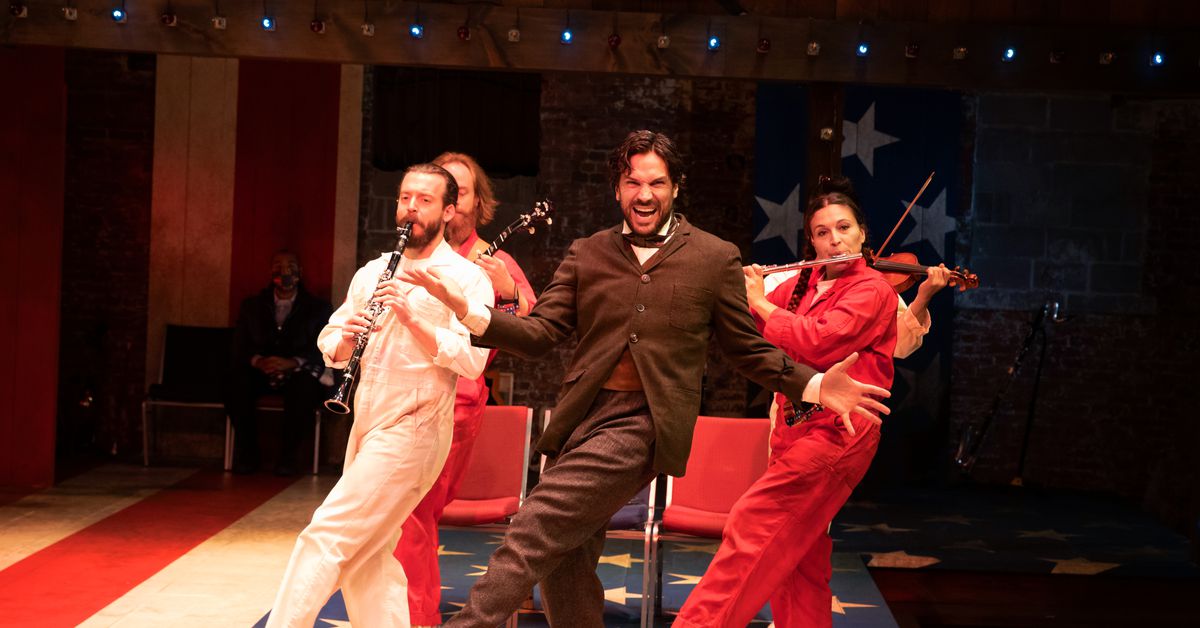 “What a wonder is a gun,” a character muses early on in Assassins, now revived in an excellent production at Classic Stage Company. And the second you see a gun point across the stars-and-stripes-painted set, you’re going to think of the last American mass shooting you heard about.

Yet despite the repeated image of guns leering out of posters and programs in this show, Assassins is not just about weapons. It’s about what we’ve all been living through over the past year, the past two years, the past five years, and what it’s brought out in the country. It’s about why America seems to love her weapons so.

The characters of Assassins, each of whom will eventually attempt to kill a US president, all feel betrayed, forgotten, left behind by those who matter. The Proprietor (Eddie Cooper) of the nightmarish fairground where they meet tells them he has a cure for their problems, and that it is a gun. He also sells the assassins the promise that they are right to feel betrayed. “Everybody’s got the right to be happy,” he sings, counting his cash with a flourish as his customers take turns aiming their new guns. “Everybody’s got the right to their dreams.”

It’s this dark echo of the Declaration of Independence that keeps winding its way through Assassins’s deceptively cheerful score, before it finally resolves into “Another National Anthem.” We’ve all got the right to the pursuit of happiness. If yours doesn’t succeed, well — who pays?

Everyone does, answer the assassins. Everyone else in the country.

Assassins, with a score by Stephen Sondheim and a book by John Weidman, has a long and troubled history. It first premiered off-Broadway in 1990 to decidedly mixed reviews, perhaps due in part, the New York Times theorized at the time, to the “relatively jingoistic” Gulf War era, which did not care to see a series of US presidents be shot in effigy. A revival planned for 2001 was rapidly postponed (guess why), and so the show wouldn’t end up making its way to Broadway until 2004, in a production directed by Joe Mantello with Neil Patrick Harris playing the Proprietor’s counterpoint character, the Balladeer.

The 2004 Assassins, safely distanced from either a popular war or a national tragedy, was a massive critical success, winning five Tonys. The production effectively rehabilitated the show’s reputation from a problem show to one of Sondheim’s most darkly funny and ironic works. (Sondheim has said he considers it to be “perfect.”)

In our own moment, which seems to offer up another national tragedy every month, Assassins feels less funny and more like a dark confirmation of what you already feared might be true. It’s like an insight into the worst part of our national character that wouldn’t become unavoidably clear until 30 years after it was written.

If ever there was a director who should be a perfect match for Assassins, it’s Sondheim vet John Doyle, who takes the reins at Classic Stage Company. Starting with his Sweeney Todd revival in 2004, Doyle popularized the stripped-down approach to musical theater: small casts, minimal sets, actors playing their own instruments. And Assassins, whose chronology spans John Wilkes Booth shooting Lincoln in 1865 and Samuel Byck stalking Nixon in 1974, with all of the main players mingling across the centuries on that nightmarish fairground, benefits from an approach so stark you can see its bones.

With Doyle’s sparse arrangements, we can hear more strongly than ever how false the countermelody to the other national anthem rings. That countermelody is provided by the folksy Balladeer (Ethan Slater), who strums his guitar with an unnervingly placid smile and serves as a narrator of sorts for long stretches of the show. He’s selling us the twangy, jingoistic legend of America. “I just heard, on the news, how the mailman won the lottery!” he sings. “Goes to show, when you lose, what you do is try again.”

While the Balladeer allows to the audience that “every now and then the country goes a little wrong” and that a madman or two, or nine, might happen to come along with a gun, he assures us that we have nothing to worry about in the long run. “Doesn’t stop the story,” he croons. “Story’s pretty strong.”

Still, there are times when Doyle’s strategy is sometimes more stark than is helpful. On the long barren stage, jutting into the audience and exposed on three sides, the actors seem adrift in time and space. In the dialogue scenes they struggle to land Weidman’s spiky, jagged-toothed jokes: there’s nowhere to ground the punchlines.

Sondheim’s score is so sleek and insinuating that it by and large protects the songs from a similar fate, but even there, at certain moments, the tone is distorted. Giuseppe Zangara, the hapless Italian immigrant who tried and failed to assassinate FDR, gets a comic number in jokey stage dialect about how he was driven to assassination by stomach pains. It’s a funny song, it traditionally gets a laugh, and then Zangara traditionally interrupts the audience’s laughter with a chilling, vengeful howl: “No laugh! No funny.”

The idea is that the joke and its destabilization together teach the audience how to watch this pitch-black show and its rage and its irony; how we will rarely sympathize with the assassins, but we must always take them seriously. But when I saw Doyle’s production, when Zangara (Wesley Taylor, nicely put-upon) shouted, “No laugh!,” he shouted into dead silence. The whole thing felt so solemn that the audience would never have dreamed of laughing in the first place.

Still, that empty stage does give the performers space to shoot out pulses of discordant, malevolent energy into the audience. Making the most of it, Adam Chanler-Berat resists the urge to be charming and goes inward, and incel, instead as John Hinckley Jr., the man who shot Reagan because he was obsessed with Jodie Foster. Will Swenson jolts the whole audience upright as oily, aggrandizing Charles Guiteau (who killed James Garfield), with a fake smug smile fixed permanently below his wide and frantic eyes.

Most unsettling of all is Steven Pasquale’s John Wilkes Booth, the first American presidential assassin, who sweeps onto the stage in a rustle of silk and menace, with unmistakable intent. The other assassins sometimes seem to lash out at random, but Booth knows exactly what he’s doing, and he leads the rest of them along by his example. So strong is his conviction that he even gets the Balladeer to strum along to his sweet-toned ode to the Old South — right up to the point that it devolves into a snarl of racial slurs.

Doyle’s somberness helps suit this Assassins to our own dark days. He rarely stoops to hokey literalism, but it is still impossible to watch this production and not think about the anti-lockdown rallies, the anti-mask rallies, the anti-vax rallies, the election rallies; how they can become riots.

As the assassins form their final tableau, they strap Covid-19 masks across their noses and mouths, printed with the American flag. In the background, on the same screen where we just saw Jackie Kennedy fling herself away from a just-shot JFK, footage of the January 6 Capitol riot flickers. One last final scream of rage from the part of the country we try to drown out with our ballads.

“They may not want to hear it,” the assassins tell us, “but they listen, once they think it’s gonna stop the game.” Walk out of the theater and try to stop listening.