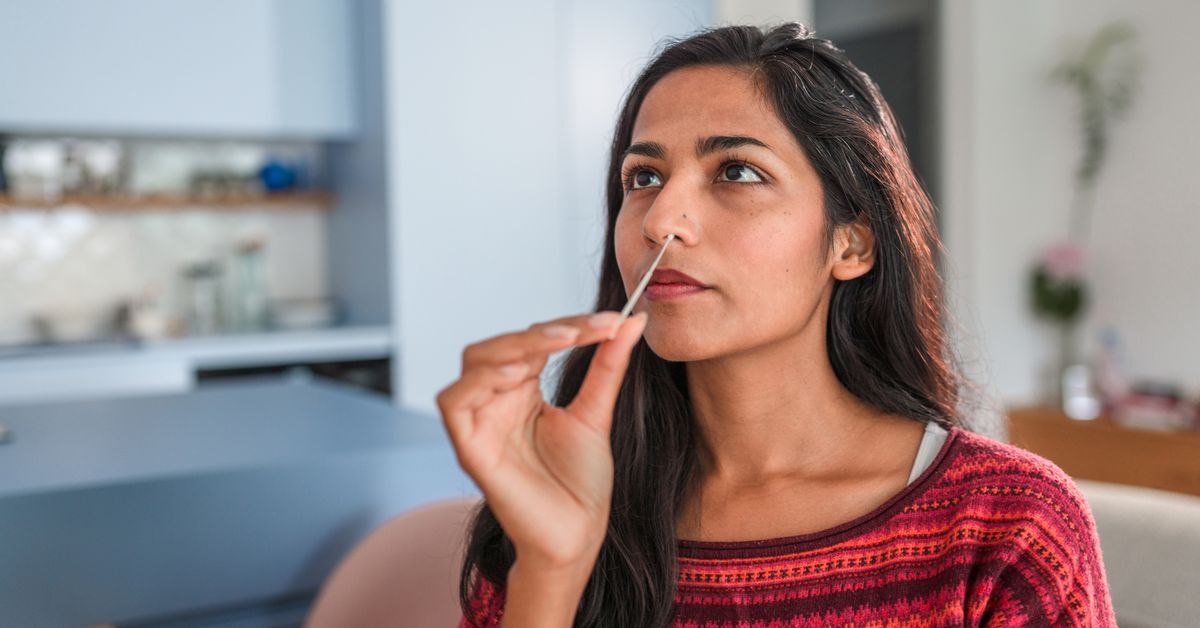 As many of us rush around trying to find the perfect Thanksgiving turkey and holiday gifts, there’s another thing experts recommend we stock up on: at-home tests for Covid-19.

“At-home testing will be essential over the next few months,” said Leana Wen, an emergency physician and professor of health policy at George Washington University.

The most common form of at-home testing is the rapid antigen test — think BinaxNOW, QuickVue, Lucira, or Ellume — where you swab your own nostrils and get results back in around 15 minutes. These can be found at your local pharmacy, though supply has been erratic (more on this below). Antigen tests are typically contrasted with molecular tests — think lab-based PCR — which are better at picking up the virus, though you have to get swabbed by a professional and then wait, sometimes several days, until results come back.

Now, however, companies like Cue Health and Detect are selling a new class of tests: molecular tests that can be performed entirely at home. They promise PCR-quality results in under an hour — all without ever having to get up off your couch.

If you can find and afford at-home tests — whether they’re the relatively cheap antigen tests or their more expensive molecular cousins — experts say it will be particularly useful for you to have them on hand this fall and winter, for a few reasons.

For Americans who got their first two doses this spring, immunity may well be waning. Data so far shows the vaccines’ effectiveness against infection tapers off around the six-month mark. And so far, only 18 percent of Americans have gotten a booster shot (though that may well rise now that all adults are eligible). That, together with the fact that infection rates are climbing in the US, means breakthrough cases are likely to rise here, as they’ve already begun to do in Europe. And with the weather getting colder and the holidays coming, we’re all going to be spending more time indoors with others.

To be clear, if you’re fully vaccinated, the data shows you’re still well protected from severe disease or death from Covid-19, and reported infections in the US are so far still mainly among unvaccinated people. But should you get a breakthrough infection, you could infect others who are unvaccinated, have waning immunity, or are elderly and thus more at risk for severe illness even if they are vaccinated. That’s what testing can prevent.

“We need to shift from thinking about at-home testing as just a diagnostic tool to thinking about it as a preventative tool,” said Wen, who recommends taking a test before an indoor social gathering even if you’re not feeling symptoms.

Neil Sehgal, a health policy professor at the University of Maryland School of Public Health, told me he’s about to fly from Washington, DC, to California to spend Thanksgiving with relatives there. Everyone in his family plans to take a rapid test before the holiday meal, he said, to help ensure they don’t pose a risk to others.

“The challenge right now is that even if you are vaccinated, your breakthrough infection is a link in a chain that may end up infecting somebody for whom consequences may be more serious than for you,” Sehgal told me. “We all have to make a decision about whether or not we want to participate in those chains of transmission.”

Likewise, Wen said she’s planning to use rapid tests for holiday get-togethers. She also finds them useful for birthday parties and dinner parties; now that it’s getting too cold for outdoor meals, her family and her invited guests test before gathering in her home.

Both experts noted that there’s an additional reason why it’s useful to keep a few tests in your house in the coming months: Antiviral pills for Covid-19, produced by Merck and Pfizer, will probably soon be available in the US under an emergency use authorization. But these treatments are most effective if you take them soon after you’ve become infected. That means it’s in your interest to catch the virus early on — and having a test close to hand can help you do that.

It shouldn’t be so hard to get at-home tests. Here’s what went wrong.

One issue clouds these expert recommendations: The availability of at-home test kits has been spotty at best.

An American, looking at how easy it is to snag a rapid test across the pond in the UK or Germany, could be forgiven for feeling a pang of envy — and a hefty dose of frustration. More than a year and a half into the pandemic, over-the-counter antigen tests are often sold out at stores like CVS or Walgreens.

Despite the Biden administration’s decision to invest $1 billion in rapid tests, the market remains constrained, in part because of regulatory hurdles. Early on, the US decided to categorize these tests as medical devices, which means they needed to pass a stringent FDA approval process, Sehgal explained. As a result, only a few companies’ tests squeezed through to market in 2021.

“We’ve been slow to adopt and approve them in the US because they’re not as sensitive as PCR tests,” Sehgal said. But even though antigen tests are not foolproof at detecting the virus, “they are sensitive enough to give you a pretty realistic sense of whether you pose a risk to the people you’re gathering with” — that is, of whether you’re actively contagious.

“I do think a more public-health-minded mental model would have led to quicker approval of more rapid antigen testing options,” Sehgal continued. In other words, the US should have conceived of the tests as a harm reduction measure: We know they’re not perfect, but if we deploy them at scale, they’ll reduce harm overall.

“The FDA would still have to approve them under an emergency use authorization to make it to market, but the urgency with which the FDA has acted with vaccines could have been similarly applied to testing. If so, I think we’d have seen earlier approvals for more domestic manufacturers of rapid tests,” he added.

Another reason for the low stock is simply that bigger purchasers snapped up a lot of the tests early on. Companies, sports teams, and school systems placed bulk orders in the spring and ate up a lot of the stock before the general public could get to it. “They made contracts because they knew that to resume in-person activity, this would be a good strategy,” Sehgal said.

The upshot is that when regular individuals walk into their drugstores to try and buy a couple boxes, there’s not much left on the shelf.

Under the Trump administration, officials at times appeared to discourage testing, for fear that it would reveal more positive cases. Instead, the US focused on developing vaccines at warp speed, thinking of them as the silver bullet that would destroy the pandemic.

But this fall, the Biden administration decided to make testing a more integral part of its pandemic strategy. White House coronavirus response coordinator Jeff Zients said in October that the $1 billion investment “puts us on track to quadruple the amount of at-home, rapid tests available for Americans by December. So that means we’ll have available supply of 200 million rapid, at-home tests per month starting in December.”

Many experts hailed it as a welcome, if overdue, commitment.

“What rapid tests do is they allow us to live more peacefully with this virus — to actually be able to not have it be so disruptive to society,” Michael Mina, an epidemiologist who’s been one of the most vocal proponents of rapid tests, told the Washington Post. These tests can make quarantines unnecessary, allowing us “to keep students in school, to keep businesses running and to stop the need for shutdowns, even amid outbreaks.”

The next generation of at-home tests

Up till now, at-home testing has been pretty much synonymous with antigen tests, such as BinaxNOW or QuickVue. Overall, these tests’ sensitivity tends to be in the range of 85 percent, meaning they miss about 15 percent of people who are infected. That said, they’re very good at detecting an infection when people have high viral loads, which is when they’re likeliest to infect others.

Molecular tests are considered the gold standard in Covid-19 testing. They take your sample and amplify the genetic material in it many times over, so if there’s even a tiny shred of virus in it, they will almost certainly detect it. Traditionally, the downside has been that you need a professional to swab you and a lab to process your results.

At-home molecular testing is starting to change that.

This month, the health tech company Cue Health began selling directly to consumers a molecular test that can be performed entirely at home. You can buy it online, no prescription needed, and get lab-quality results without leaving home, according to the company. The Cue test shows results in line with lab PCR results 97.8 percent of the time, as verified in an independent study conducted by the Mayo Clinic. And it’s quick, offering results in 20 minutes, similar to the wait time for antigen tests.

There’s a catch, though: It’s not cheap. A three-pack of single-use tests will run you $225, and that’s not counting the reusable reader, which costs $250. At that price point, it’s far from ripe for equitable access. (For comparison, antigen tests are priced from about $10 to $40 per test.)

Detect is another health tech company offering an at-home molecular test (the product will be available soon). This one will also come with a reusable hub and single-use individual tests. With the hub priced at $39 and each test at $49, Detect’s system will be more affordable than Cue’s, though still pricier than an antigen test. The Detect test is 97.3 percent accurate, similar to a PCR lab test, according to Axios. It returns results in one hour.

Both Cue’s and Detect’s tests have earned an emergency use authorization from the FDA, and both companies have their sights set on much more than just Covid-19 testing. With a bit of tweaking, their platforms should be able to test for other health issues, too.

Detect’s plan “is that you’ll be able to get a flu test or a Covid test or whatever you need, at home,” Owen Kaye-Kauderer, the company’s chief business officer, told Axios.

Cue envisions a future where its reader will be able to test you for everything from the flu and strep throat to chlamydia and gonorrhea. “Covid has basically accelerated the transition to virtual care services and connected diagnostics,” Sever told me.

The fundamental innovation here — giving your humble home the diagnostic capabilities of a professional lab — will likely become popular in many areas of health care over the next few years. That helps explain why companies like Cue and Detect are eager to get into the game, even though many experts say that as we approach springtime, Covid-19 will likely be entering the endemic phase: It’ll keep circulating in parts of the population, but its prevalence and impact will come down to relatively manageable levels, so it becomes more like the flu than a world-stopping disease.

“When we get to the point where transmission has slowed and we enter the endemic phase,” Sehgal said, “at-home testing becomes much less important.”

In the meantime, Wen recommends that each family keep a few at-home tests in the house. Don’t fret too much about whether they’re antigen or molecular; get what you can find and afford.

“This is a case of ‘don’t let the perfect be the enemy of the good,’” she said. “These tests can allow us to go from Covid-19 as a threat that feels almost existential to just another risk among all the risks we take into account every day. They can let us get back the normalcy we’re craving.”