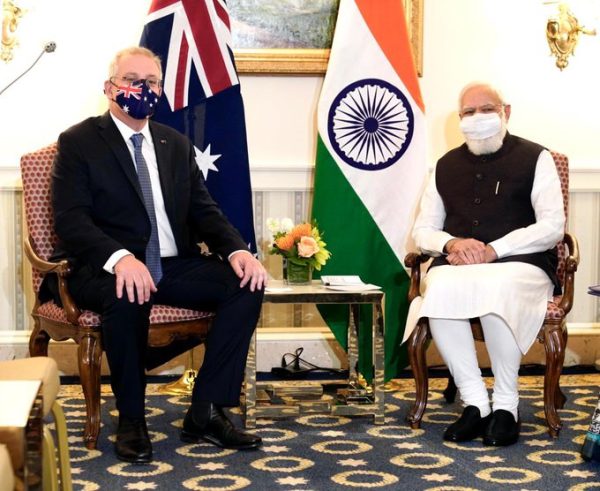 The posturing by the Australian media and its politicians against so-called Chinese aggression has given India a leg up in garnering closer bilateral ties with Australia. Australia has strengthened its ties with India dramatically in the face of a perceived threat in the Pacific from China. The Quadrilateral Security Dialogue (Quad), which also includes Japan and the United States, regularly meets to discuss security concerns, with one of its main objectives being to freeze China out of security concerns in the region.

But Australia’s embrace of India overlooks one glaring problem: The South Asian country has become a bastion of Hindu extremism, especially targeting the minority Muslim population.

The ruling Bharatiya Janata Party (BJP), led by populist Prime Minister Narendra Modi, has attempted to stoke Hindu victimhood in a country where Hindus make up 84 percent of the population. A right-wing statement, “Hindu khatre mein hain” (Hindus are in danger,) that has become ever more popular and the ruling party has done nothing but exacerbate this rhetoric. This has led to violent attacks on Muslims.

As a result, India’s oft-vaunted title of “the world’s largest democracy” hides a wealth of ills. Australia, however, seems immune to the vast swathes of human rights abuses that the Modi government perpetrates on Indian citizens, preferring to view India as a key ally. This is a far cry compared to the high-profile discussion in Australia of China’s mistreatment of its own Muslim ethnic group, the Uyghurs.

For a nation that Modi calls the “mother of all democracies,” this is a violent lurch to authoritarianism. Freedom House downgraded India’s democracy rating from “free” to “partially free” and India now ranks 142 out of 180 countries on the Reporters Without Borders World Press Freedom Index. It has yet to receive any criticism from Australia.

Australian Foreign Affairs devoted large aspects of their October issue to pining over India, at one point calling it “our next great and powerful friend.” The magazine had several feature pieces on the relationship, without once pointing out any of the violations India’s government perpetrates against its own citizens. Instead, the publication went into great detail about the bilateral naval exercises the two countries participated in and fawned over Australia’s preferential access to military instillations in India compared to the United States

In the latest example of Australia’s blindspot toward India’s human rights record, Modi was invited to give the keynote address at the Australian Strategic Policy Institute’s Sydney Dialogue, alongside Australian Prime Minister Scott Morrison. In his address, Modi described technology in India as solving global problems. What he didn’t mention is that the BJP has been using technology to both stifle dissent and crack down on freedom of expression and peaceful protests. India shuts down the internet more than any other country on Earth – 109 times in 2020 alone.

After Pakistan’s victory over India in the recent T20 World Cup, Indian Muslims were arrested for celebrating the win – some for simply posting a celebratory status on WhatsApp. Hardliner Hindu nationalists didn’t back down from the criticism they were attempting to drive Muslims away from India. “These people should go to Pakistan,” Rajendra Parmar, a member of the Hindu militant group Bajrang Dal, was quoted as saying. A group of medical students were charged under India’s struct anti-terrorism laws in Kashmir for supporting Pakistan in the game. A former BJP lawmaker Vikram Randhawa said the students should be “skinned alive.”

India’s colonial era “sedition law” or section 124A in the Indian penal code, makes “disaffection towards the government” punishable by law. Journalists have noted this law is now used to stifle freedom of speech in India.

Combining two worrying trends, freedom of expression has also been curtailed when reporting on the abuse of Muslims in India. When a video went viral showing the violent assault of an elderly Muslim man, the BJP launched investigations into the journalists who reported on the violence. Police in the northern state of Tripura have filed terrorism cases against 102 social media handles for posting content related to Hindu-instigated violence against Muslims. Washington Post journalist Rana Ayyub, herself a Muslim, argued that “it shames the Indian Government that they are targeting journalists for reporting basic facts.”

Like Australia, the executive branch in India is bestowed with wide ranging and broad powers of surveillance. Modi himself has proposed personal data surveillance laws that closely mirror those passed by both major parties in Australian parliament in August. These only enhance the surveillance powers of the state – often with minimal oversight. As late at 2019, BJP minister Ravi Shankar refused to deny that India had used the Israeli built Pegasus spyware to monitor its own citizens.

While rushing toward isolating China, the Australian government’s lack of statements regarding Indian authoritarianism reeks of hypocrisy. Australia should call on India to stop its prosecuting of the media and drop the criminal charges against critics of the Indian government. A country is not fit for the label of democracy if its attacks on freedom of speech and overt use of discretionary powers hinder the rule of law. Modi’s ministers have openly called for traitors to be shot. By keeping quiet on this, Australia is complicit in moving South Asia to a more authoritarian and dangerous place.