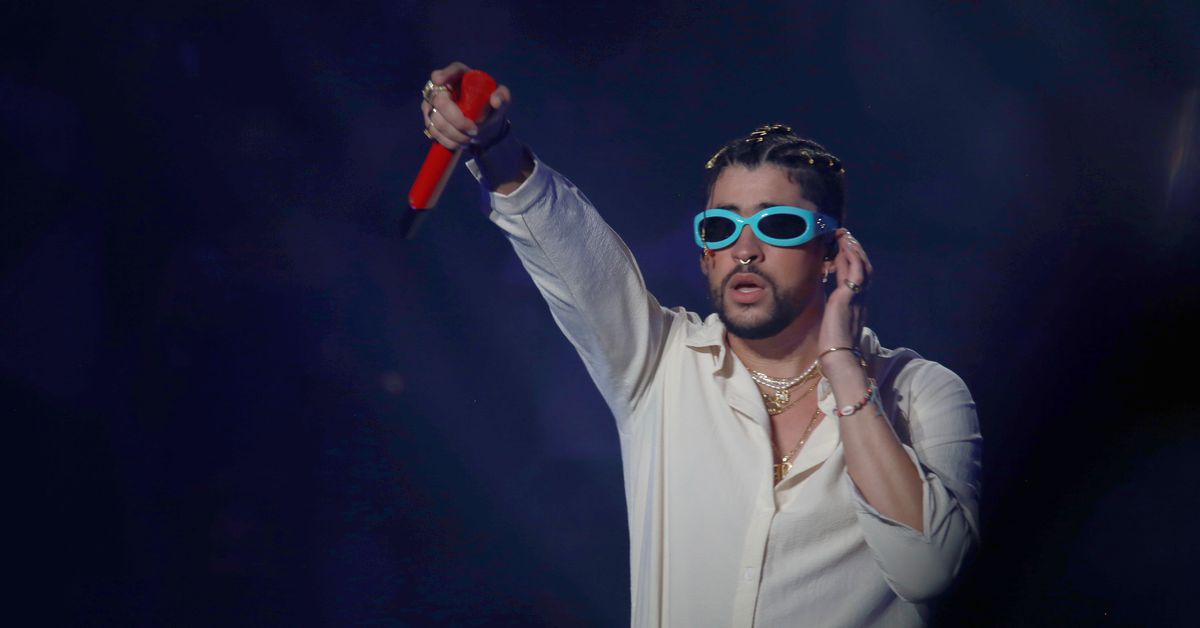 Between breaking Spotify records, starring in a new Brad Pitt movie, and getting cast as a Marvel superhero, Bad Bunny’s having a helluva year. No other Latin artist today has reached such global stardom — and, yet, the reggaetón rapper only has eyes for one place: Puerto Rico.

To kick off the tour for his latest album, Un Verano Sin Ti, Bad Bunny booked El Choli, San Juan’s largest indoor arena, for three nights straight. The $15-$150 tickets weren’t sold online, so folks camped outside for hours. That was by design; the tickets were intended to really only be available to those who live on the island. Naturally, a record celebrating the island’s beauty, girls, and resilience should be properly danced to by its people.

The booking was a sign to outsiders to stay out. Years after Hurricane María devastated the island, Puerto Rico now is facing an uptick in gentrification and development, especially from mainland Americans who are receiving a hefty tax break in return. But resources for islanders haven’t improved. Newcomers are claiming the beaches are private property, when legally all of them are public. Developers are polluting the water and endangering the wildlife. This tension comes on top of blackouts, caused by the recent privatization of electricity (rates have increased seven times in the last year alone). It’s a sentiment Bad Bunny touched on in his song “El Apagón” (literally: “The Blackout”).

So what do Puerto Ricans do? We party. As a response to rising developer tensions, party protests have cropped up from coast to coast as an act of reclamation and dissent. In the popular beach town of Rincón, protesters danced to plena while they tore down and cleaned up construction materials abandoned by developers last month. (The courts had declared the work illegal in February, after a year of protests.) These protests aren’t just dancing to good beats, though. They’re rooted in a long history of direct action and often come with brushes with police.

It’s significant that the first of these performances was broadcast on Telemundo PR — imagine if, say, ABC had Beyoncé perform on national television for four hours straight. While Bad Bunny isn’t a political organizer, he is an amplifier, given his huge platform. Through his music, his explicit longing for a better Puerto Rico is clear. His record-breaking performances last weekend exuded a cathartic, collective joy for attendees and streamers alike.

Considering Puerto Rico’s fraught relationship with the United States, Bad Bunny’s spotlight on the country holds a certain weight. For many islanders, Puerto Rico’s status as a US territory has created a sense of inferiority and internalized colonialism, said José A. Laguarta Ramírez, a research associate at Hunter College’s Center for Puerto Rican Studies. “There’s often this idea that Puerto Rico’s too small to make it or for great things to come out of here,” he told me. “A side effect of that is every time a Puerto Rican does something that gets recognition internationally, it’s a source of national pride, a kind of cultural nationalism.” (I’ll admit: I’m guilty of this, too, as a Diasporican.)

Politically, Puerto Rico is very divided. There are groups that want independence from the US, those who want to stay as a territory, and those who want to become a state. But no matter where you fall, folks see celebrities like Jennifer Lopez and Daddy Yankee as proof that, yes, Puerto Rico can be a place people can be proud of — despite the bullshit. Bad Bunny, who grew up in Vega Baja’s public housing, is just the latest to be added to the national canon.

As Bad Bunny’s celebrity exponentially grows, these shows were a refreshing reminder of what — and who — reggaetón is for. Bad Bunny didn’t leave Puerto Rico behind as he ascended the charts. He brought it with him.

Bad Bunny’s rise to fame can be partially attributed to his predilection for genre-bending. Sure, it’s reggaetón, but there are also touches of rock, R&B, salsa, dembow, and so much more. He’s daring and experimental, while simultaneously referring to the hallmarks of the genre. Un Verano Sin Ti is reflective of that inclusion. The features range from reggaetón heavyweights like Tony Dize and Chencho Corleone to up-and-coming Puerto Rican indie artists such as The Marías and Buscabulla. He could’ve featured American artists — he’s certainly big enough to do so. But in a May interview with the New York Times’s Isabelia Herrera, Bad Bunny said he’d rather put “the whole world onto underground from Puerto Rico, you know? That makes me feel proud of what I represent.”

Fans agree. As Carlos Nagovitch, a concert attendee, told me in Spanish, “He has never stopped making music from Puerto Rico.”

Certainly, reggaetón’s international popularity is skyrocketing, and not all of the hits are coming from Puerto Ricans (Rosalía’s “La Fama” or J Balvin’s “Mi Gente” come to mind). So to really home in on artists from the island or from the diaspora is an ultimate power play. The world may be able to consume and churn out reggaetón, but divorcing the music from its history and its context isn’t going to happen if Bad Bunny has anything to say about it. “Everyone wants to be Latino, but they lack rhythm, drums, and reggaetón,” he sings in “El Apagón.”

But qué emoción to have an artist who cares more about being accessible to Puerto Ricans than American perception. If you weren’t at El Choli, you were watching the Telemundo PR broadcast or livestreaming at a party in the plazas nearby. There were more than 18,000 people at these shows every night, and that’s not including people who watched from home. The performances were an event for all Puerto Ricans, even those in the diaspora who watched from TikTok or Twitch.

There was a special, once-in-a-lifetime quality to these performances. “It was just us and him,” said concert attendee Alysa M. Alejandro Soto. “I feel like that’s something he wanted to achieve: a special, intimate moment with PR.” During all three shows, Bad Bunny spoke about the privatization of the electricity grid, the gender violence women experience, and the pollution of the beaches. Because Bad Bunny’s music already lends itself to issues on the island — “El Apagón,” “Andrea,” and “Yo Perreo Sola” are all great examples — it was expected he’d have something to say about the collective experiences Puerto Ricans face. “We have a government over us that messes up our lives day in and day out,” he said before telling the private electricity company and the governor to go “pal el carajo.”

He also spoke of a better PR.

“He asked the crowd how many of us wanted to achieve our dreams while living in Puerto Rico,” Alejandro Soto added. “It made me really emotional since I am currently living away from PR for academic reasons and I miss it every day. He’s using his platform very wisely to bring awareness to issues that affect Puerto Rico and to break many stereotypes.”

The energy at the shows, according to indie band Buscabulla’s Raquel Berrios and Luis Alfredo Del Valle, was “absolutely massive” and like “a portal to another dimension.” The duo, who are featured on the song “Andrea,” performed alongside Bad Bunny at 2 am each night. For Berrios, it was the largest show she’s ever done, and probably one of the most emotional, too.

“The show was a special show made for Puerto Rico,” Berrios told me. “I just hope it inspires people. I hope that it gets more people to just be more involved with the issues of PR and maybe having bigger artists be more aware and do more for Puerto Rico.”

Buscabulla weren’t the only ones brought to the stage. Besides the artists featured on Un Verano Sin Ti and some fans with excellent dance moves, Bad Bunny also invited queer musicians like Young Miko and Villano Antillano, the first prominent trans Latin rap artist. Misogyny and transphobia is pervasive on the island, so to see these artists on stage, who are often marginalized within the genre, at the largest concert in Puerto Rico’s history on national television is mind-blowing.

“I’m a queer woman, and growing up we never really had songs about women liking women,” said Alejandro Soto. “We always had to make the urban music made by heterosexual men fit because it’s what we had. Young Miko, Villano, and other queer artists are doing something very important, and it makes me so proud that they are from PR.”

For Marisol LeBrón, an associate professor at the University of California Santa Cruz, she enjoyed how “tongue-in-cheek” the performances were.

“I was on Twitter and seeing stuff that was like, ‘I feel so bad for people who aren’t Puerto Rican,’” she said. “There is something that’s really powerful about that — to affirm this feeling of incredible pride every day. The fact that the shows gave an outlet for people to counter the overwhelming dominance of that [inferiority] narrative and the kind of things that govern people’s everyday lives is actually amazing.”

It’d be a misnomer to say that Bad Bunny is at the heart of change on the island, or that he’s the ultimate ally. But, damn, he can throw a party.

“It’s bigger than Bad Bunny,” LeBrón said. “It’s about this energy and it’s about this connection. It’s this feeling of being united.”