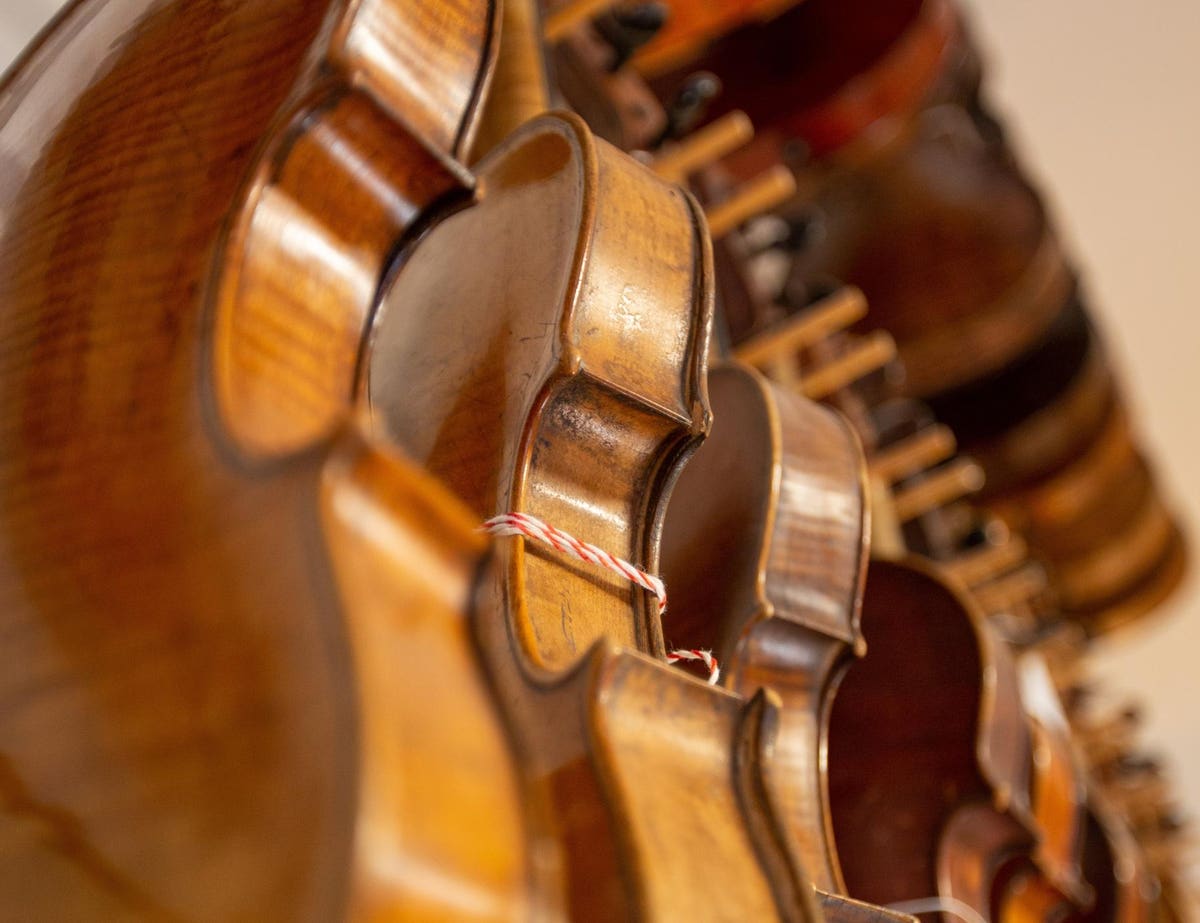 The region of northern Italy where the 17th and 18th century musical instrument maker Antonio Stradivari lived and died produces no wine. Whether that thin orphan turned craftsman who wore a white cap and apron appreciated vintages, we do not know. Yet today, some of the world’s greatest winemakers appreciate how the craft of making violins resonates with their own vocations—transforming a natural material into a conduit for sensory pleasure.

Earlier this month, members of Premium Familiae Vini (PFV)—a group of twelve prestigious Europe-based wine producers—gathered south of Brussels in Belgium. There, they presented their new ‘sustainability award’ to Maison Bernard, which is a family-based business that produces violins in Brussels. Jan Strick and his son Matthijs collected the prize. This pair and their assistant, bow maker Pierre Guillaume, also restore instruments—including a 1732 Stradivarius at present.

‘There is the Nobel Prize, but I never thought such a prize could exist for a family business,’ Jan remarked as he received the award. ‘Now, there is opportunity to put such businesses and people into the light.’

Part of the €100,000 ($112,000) prize money will pay expenses for Matthijs to travel to Chicago and New York to work with renowned businesses that deal in violins.

Surrounded by these winemakers in the stunning home of artist Sophie Cauvin (which is also an art gallery), Jan shared his history.

‘I found a violin that belonged to a grand uncle. At 14 years old I had a passion to make violins. I saw a shop with violins when with my father. The door opened and a strange man looked at us. He was nicely dressed in fancy clothes. I explained my obsession to become a violin maker. But, because he already had an apprentice, he took our address instead. A few months later he wrote to say that his apprentice had left. The work demands were eccentric, including having to wear a suit and tie.

‘This is how I began in Maison Bernard in Liege—as an apprentice. I also spent eight years in France, making and restoring violins.’

Paul Symington of The Symington Family Estate of Portugal shared reasons for the importance of this PFV sustainability award—which is awarded to a family company that demonstrates excellence in sustainability, innovation, craftsmanship and the transmission of commitment to future generations.

‘PFV and its twelve families are often seen as the epitome of tradition in the world of wine. In reality, we are the absolute opposite—we are ground breakers … the ones who refused to lay down the torch of family ownership. Our parents and grandparents worked through difficult times.

‘Two figures from McKinsey and Company are that 85% of global GDP is generated by family businesses, but only 16% of family companies continue into the second generation.’

‘The uniqueness of our vineyards—and the special family touch—has a profound impact on the wines that we make. It is a fallacy that family companies are inherently weaker because they cannot compete with ultra-efficient corporations. I quote again from McKinsey: ‘family ownership has often been linked to superior shareholder performance’ and ‘family businesses invest 29% higher share of revenue in R&D than non-family businesses.’ ’

Symington drew a clear parallel between family values and craftsmanship—whether for vignerons—winemakers, or for luthiers—makers of musical instruments.

‘Maison Bernard is a brilliant example through their dedication to excellence, and to championing wider ideals.’

At this 36-setting, 12-wine award event—winemakers provided context about their own craft.

Hubert de Billy, of Champagne Pol Roger, shared values of generational identity. ‘Wines become magical with time. Most important with business is to have future generations, and not deceased ancestors, proud of our wine.’

Meriea Torres—a graduate of chemical engineering from Barcelona and of winemaking from Montpelier—is now Innovation & Knowledge Manager for Familia Torres wines. She explained the value of long-term familiarity with a craft—be it for creating instruments or making wine. ‘What is important is the compromise between experience and innovation,’ she summarized.

Julien de Beaumarchais de Rothschild, of Baron Philippe de Rothschild, noted that ‘If you give a bad violinist a Stradivarius, he will make bad music.’ In the same way, he emphasized, producing good wine requires the combination of both a talented winemaker and optimal terroir.

German winemaker Egon Müller shared his own understanding of the rewards of personal involvement with hands-on craftsmanship. Müller—who harvested grapes in the Médoc in Bordeaux in 1979, and worked with Robert Mondavi in 1983—reaped grapes for the first harvest of his own wine in 1986. Asked about the size of his vineyard, he responded, ‘We could be bigger, but I want to be able to do everything myself.’

Prize winning violinist Jan Strick, dressed impeccably in suit, vest and tie, glowed with pride as he paced around the room and listened to a quartet play classical music with instruments that he and his son had fashioned.

‘Sometimes in life,’ he said, while enjoying the moment, ‘you need luck.’

That may be true. Yet it also took decades of diligent effort to win this well-deserved award.