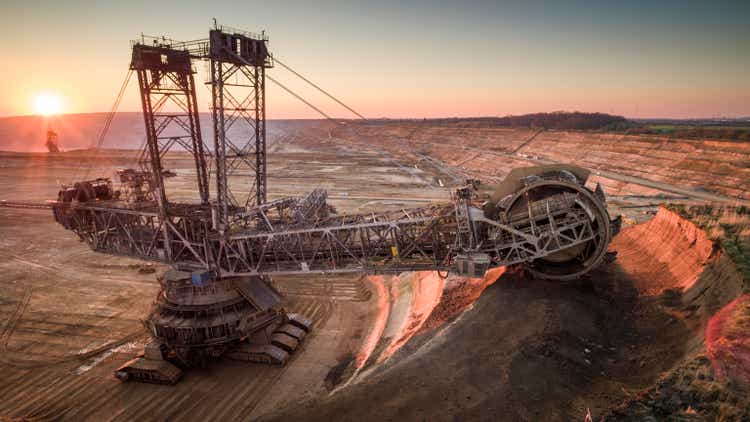 BHP (NYSE:BHP) is a global metals, mining and petroleum business. The company is based and listed in Australia, formally being dual-listed in the UK. It is the second largest miner in the world, only beaten out by Glencore (OTCPK:GLCNF).

BHP’s core commodities include Copper, Nickel and Potash. Mining is predominantly based in Chile, Australia and Canada.

So although they are a diversified miner, the business is certainly highly concentrated in the iron ore market.

The reason we have turned our eye to BHP is due to the dreaded I word. Commodities usually outperform other market assets during times of heightened inflation. More generally, inflation is one of the greatest issues for individuals over their lifetime and so commodities exposure serves as a great hedge for investors.

One of the biggest reservations investors have is the industry is heavily cyclical, bear markets can be tough to endure and good times do not produce the headline returns the tech market does for example. One thing we must remember is that metals are required for so much of the everyday products we use, be it mobiles, computers, cars and machines.

BHP’s share price has generally trended upwards, with a large spike post COVID-19. The reason for this was the explosion in consumer demand, which caused businesses globally to ramp up supply quickly to meet this.

BHP could be the most important investment an individual can make this year. Inflation is rampant, the stock market is officially in a bear market and the crypto market is capitulating. This paper seeks to assess if BHP can be a saving grace or if it is another trap.

Firstly, BHP has been aggressively looking to dispose of its oil and gas, and coal operations. In recent months, BHP has disposed of its share in the Cerrejon coal mine to Glencore and its BHC mine to Stanmore SMC. The reason for this is partially due to investor and social pressures to reduce their carbon emissions.

The entire oil and gas portfolio will merge with Woodside on the 1st of July, giving BHP shares in Woodside. Given we are in the heights of the oil market, it is a great time to dispose of the operations. Management have touted synergies from the operations and will allow BHP to focus on the core metals business, which are more aligned with the replacement of fossil fuels.

Moving onto the core operations, production of Copper and Nickel is down low double digits, with Iron unchanged. The main reason for this was disruptions at BHP’s Escondida mine. With iron ore representing the majority of BHP’s output, this is a key driver of BHP’s performance. Currently, guidance remains unchanged, with Copper adjusted lower by 150kt (Source: BHP operational review). In spite of this, BHP has performed well in its most recent period, with revenues up double digits in the LTM (Source: Tikr Terminal).

Our analysis below will benefit from having the following charts.

Commodity prices have performed extremely well post COVID-19 crash, as a result of pent up demand and lagging supply. This is supported by several other short-term shocks, such as the Ukraine invasion. Although these factors are temporary in nature, one could argue that future demand should remain fairly robust. The reason for this is twofold, firstly many countries are currently suffering an infrastructure spending gap and so will be required to increase spending to catch up. The US has recently passed a $1TN infrastructure bill to combat their deficit. Secondly, the world is moving away from fossil fuels and towards renewables which currently rely on metals. As a result, although mining metals can be quite damaging to the environment, they are a net gain for society when used for renewables. Unlike oil, there is no “alternative” to metals and the current demand for them will only increase as we move towards metal-intensive sources of energy.

Although the price of ore is important, we must consider it in the context of production costs, which is arguably more important. This is one of BHP’s selling points. In the most recent quarter, BHP’s Copper unit cost sat at $1.29/lb, which is almost half that of Antofagasta (OTC:ANFGF) and better than RIO. This is not only the case for Copper but also other metals, such as Iron. This will allow BHP to benefit from the upswings, while allowing the firm to remain profitable in the down periods.

Commodity prices are cyclical and can swing widely on news. Investors should not invest purely on price, as today’s price is not tomorrow’s price. Instead we must use this information to assess where we are in the cycle and for those risk averse, how much margin the business has above its cost.

Commodity prices are driven by demand and supply for the metal, this is usually dictated by the economic conditions globally.

Inflation is clearly out of hand. Several months ago many were calling it transitory and now central banks are struggling with getting it under control after several rate hikes. BHP has benefited from this as they have kept their costs in check, while enjoying the demand-led uptick in commodity prices. GP margin improved from 82.8% in 2019 to 88.2% in 2021 (Source: Tikr Terminal). Assuming inflation continues, commodities serve as a great diversification from other asset classes.

One of the potential bearish arguments is that GDP is ticking down. The US economy recently contracted in size, as has the UK’s. If consumer demand begins falling, or government/private investment, the demand for commodities will be directly impacted. As we have seen, prices can swing quite aggressively and so we could see a sharp correction in prices.

What I would say is, although GDP has turned negative, it is too early to suggest the inherent spending within the economy is in trouble of sharply declining, as the graph below shows.

One of the biggest factors influencing commodity prices is demand from China. China is the world’s largest consumer of iron ore and Copper. For the last few decades China has been experiencing unprecedented growth and development, which is underpinned by commodity consumption. There are potential cracks forming however.

In the short-term, China currently has a zero COVID policy, as a result of this localized lockdowns have occurred as recently as this week. Naturally, this will impact demand and growth in the economy.

The larger issue however is the faulting housing market. In recent months, the property development market has teetered on the brink of collapse, with China’s second largest developer in the process of restructuring. 40% of Chinese steel demand is accounted for by the property sector and so a slow down here could be catastrophic for iron ore. We are already seeing iron ore prices respond to news. The reason for this could be a shift in China’s policy when it comes to property. Property development is a large contributor to GDP growth and so many saw the ghost cities as a means of accelerating the Chinese economies. The system is broken however, with China’s Property price-to-income ratio being one of the highest in the world. We could be seeing the early stages of China finally addressing this, reducing the amount of empty properties being built. President Xi touched on this as part of his common prosperity speech.

Overall, economic conditions are bearish. Western GDP is falling, which will likely bring demand down with it. Looking more long-term, demand from China may begin falling which could cause an extended iron ore bear market. The question is whether demand from other counties can fill the void. Inflation is an interesting one. If it remains during negative economic growth, BHP might find itself as the best asset class to protect your wealth. With cash losing its value and markets continuing to fall, commodities could be a safe haven. If we look back at stagflation during the 1970s, commodities outperformed.

There are only a few large miners who have the scale to compete with BHP globally, we have selected those most comparable in order to assess BHP’s financial performance.

We note that BHP is more profitable than the peer group by quite a noticeable margin, as we stated previously, this is driven by their low unit cost. Our belief is that BHP is a market leader in operational efficiency. With innovation and new technologies, BHP is able to extend the life of its current mines, so as to ensure this benefit continues into the future. Late last year, BHP announced that its large Yandi mine could remain operational for 5 more years, when it was initially expected to be retired.

What is impressive is that BHP has managed to produce these out-sized returns while being similarly leveraged. BHP is committed to maintaining a net debt range of $5-$15BN (Currently $c.7.2BN) and so is in a good place to navigate any downturn that could occur.

The impressive metrics come at a cost however, BHP trades at quite the premium to its competitors. Especially in FCF terms. On metrics alone, Vale’s ROCE of 65% alongside a 12.1% dividend yield is hard to beat. Paying a premium in a bull market when stocks are going up is one thing, but markets are less forgiving in a bear market.

As with commodity businesses, the majority of BHP’s return will come from dividend payments. BHP’s current dividend yield is considerably higher than its 10 year average, as is the case with its competitors. When considered in the context of inflation, this is extremely good. Inflation has yet to reach double digits and so with BHP shares up 3.3% since January, this is an outperforming investment so far.

What is quite concerning is BHP’s payout ratio, which is currently 90%. This is problematic as BHP are not reinvesting much of their earnings, which could impact future earnings. Further, sustainability is inevitably questionable when the payout ratio is so high, as a correction in earnings could make this unsustainable. Rio Tinto’s payout ratio is a much more sustainable 73%.

Although BHP has benefited from the unusual economic conditions during the last few years, it is also suffering. BHP is currently struggling with staff shortages linked to COVID-19 and will likely see costs increase if it is to maintain its current operations. LTM GPM has contracted to 85.2% (Source: Tikr Terminal) suggesting this is slowly impacting BHP in a net negative way.

When everything is falling, investors in the stock market have two choices. They can either buy what they perceive to be cheap and hold long-term or seek to beat the market. BHP falls into the second bucket. The long-term prospects of BHP look very uncertain to us, now that cracks are showing in the Chinese housing market. Although things look much better in the short term, BHP’s payout ratio is another red flag. If costs increase slightly and commodity prices continue to trend down, dividends will need to be cut.

Therefore, we currently rate BHP a hold. Investors can certainly outperform holding BHP over the coming 12-24 months, but we see too many issues to issue an outright buy rating at its current valuation.

Editor’s Note: This article discusses one or more securities that do not trade on a major U.S. exchange. Please be aware of the risks associated with these stocks.