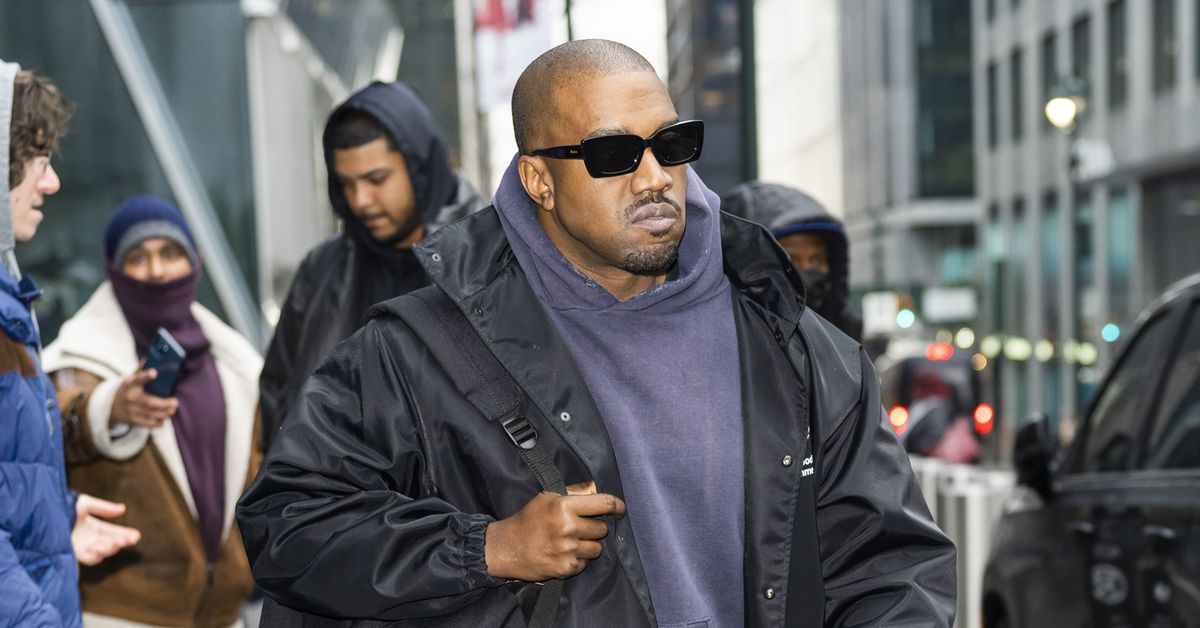 “‘Crazy’ is a word that’s not gonna be used loosely in the future. Understand that this is actually a condition that people can end up in, be born into, driven into and go in and out.”

It’s been two years since Kanye West said this in a Forbes interview, but people are still calling him crazy and everything in between — unhinged, insane, psychotic. These are the terms I’ve seen used to describe him during the past few weeks. When news spread of details of the legal separation between him and Kim Kardashian, I braced myself each day for social media reactions to the deepening chasm between them. I knew it was only a matter of time before the words being used to label him would begin to sting me too.

Now known as Ye, the rap star, producer, and all-around auteur has never been one to conform to cultural norms. But his recent actions have elicited strong criticism from his fans and detractors alike. Through sporadic and profuse posts online, and showy IRL efforts — including a pickup truck full of roses sent on Valentine’s Day — Ye has been attempting to get the mother of his four children back into his life.

While it may be a divorce between two of the most famous American celebrities of the past few decades, it is still just that: a divorce. Kardashian and West are used to the spotlight, but this very intimate matter is playing out in an extremely public and unusual way. The lack of privacy is especially concerning, given the fact that Ye revealed in 2018 that he lives with a mental illness: bipolar disorder. It’s a diagnosis I share.

I’ve shared the glib attitude about bipolar disorder. For most of my life, I had, as many others do, casually invoked the condition to belittle a person who is being rude or having an off day, or to bash something that is malfunctioning or broken. After years of being uninformed, I would come to realize how wrong this characterization is.

Bipolar disorder consists of two contrasting ends of a mood spectrum: mania and depression. Mania is an unstable mental state, described by the National Alliance on Mental Illness (NAMI) as having telltale symptoms including “grandiosity, over-optimism, or impaired judgment”; it can also include hallucinations or delusions. Depression, on the other hand, is described as “a state of persistent low mood and a decrease in energy and activity.” While it’s possible to flip between mania and depression during short periods of time — an occurrence called rapid cycling — those diagnosed with bipolar can stay in those states for months or years at a time.

Bipolar disorder “can be more addictive than any drug”

I experienced my first manic episode in 2016 at age 27, and was diagnosed as bipolar type 1 the next year during a subsequent episode. Of the seven types of bipolar disorder, type 1 is identified by extreme mania and extreme depression.

Since the sharing of his general diagnosis by way of his 2018 album ye, opinions of West have been divided, to put it mildly. Even I have gone back and forth between admiration and disapproval, depending on Ye’s antics. At this moment, I feel compassionate toward his situation. I know the peaks and valleys of this disorder all too well.

In February, I tweeted a thread about the various similarities I share with the artist, and why I hold space for him, emotionally. I received support from people who live with bipolar, as well as from those who don’t have first- or secondhand experience with the disorder. I also received criticism from people who seem to feel Kanye doesn’t deserve compassion because he’s allegedly refusing treatment in the form of medication. I’ve consistently been on an antipsychotic and a mood stabilizer for the past two-plus years, but I understand Ye’s stance.

Prior to my fourth and most recent manic episode in October 2019, I selectively used medication. While I couldn’t afford it in some instances, in others I willingly sacrificed my stability for the chance to feel the euphoric highs of mania. It can be more addictive than any drug; in fact, re-entering a manic (or depressive) episode after a period of wellness is called a relapse.

Ye’s spiritual experience of bipolar disorder — saying he feels deified — is familiar to me as well. In my early stages of mania, I feel unstoppable: like the main character, swept up by the universe and carried lovingly through each intense second of my life. During the heights of the state, I tend to become deeply invested in religion and spirituality. I feel like I’m on God’s team, a Chosen One sent here to save the world from itself. It’s intoxicating.

Music can become a centerpiece of the experience; I feel as though God is speaking to me through the bars of my favorite rappers. The lyrics feel like directives, leading me to my next cosmic adventure. In a cover story for The Fader in 2008, Kanye asserted that he feels like a conduit for creativity sent from above. “I’m like a vessel, and God has chosen me to be the voice and the connector,” he said. “I can’t be responsible. I’m good, but I’m not that good. So my job is just to be in the studio and do videos, and I just stand here and let God do the rest.”

Ye has yet to say if and when he’s going through a manic episode. My own experience with the state leads me to believe that his recent impulsive posts on social media may be traced to that element of bipolar disorder.

When I soar unmanageably high, I speak blessings over people and curse them in the same breath. I obsess over the people I love and express hostility toward them simultaneously. It’s this kind of built-in duality that might cause Kanye to hover in the space between the secular and the sacred too.

“Ye’s spiritual experience of bipolar disorder — saying he feels deified — is familiar to me as well.”

I’ve done my fair share of what I like to call “apology tours,” when I ask forgiveness of the people I’ve unnecessarily verbally attacked or otherwise hurt during moments of elevation. Most of them understand that I was going through something I could not control. Having to make amends for maladjusted actions is a lot of weight to carry, and it comes with substantial pressure, on top of the recovery process. But I’ll always do everything in my power to ensure that the people in my life know that I am not the person I am during mania.

Over the years, not everyone has accepted my apology, and I learned that I have to be okay with that. It took a while, but I’ve moved on from each dissolved relationship. I’ve lost contact with various loved ones because of this condition, but one person whose consolation I’ll never have through this hardship is my mother.

Kanye’s latest release, DONDA 2, is the second album he has named after his mother, Donda West, who died in 2007 from heart disease and cosmetic surgery complications. My mother passed away two years later, from a heart attack. In my circumstance, I self-medicated and staved off grief for years by throwing myself into academia. In Kanye’s case, he continued touring and creating mere weeks after his mother’s passing.

Both of our parents were the definition of encouraging. In the first part of the recently released Netflix documentary Jeen-Yuhs, Donda West showcases her nurturing approach to Ye by rapping one of his first rhymes from memory, and amplifying his voice and talent in front of the camera crew. My own mom motivated me to take my passions seriously, whether it was Taekwondo or marching band. “Take it to da house!” she would scream at the top of her lungs at competitive events, both embarrassing me and filling me with immense pride.

Losing the dominant source of inspiration in your life is something that feels insurmountable; the true mourning process can take years to fully surface. To this day, I feel as though my mother is with me during my most difficult times, particularly during manic episodes. Kanye’s heavy focus on keeping Donda’s name alive seems to indicate that he might feel much of the same.

There were celebrities who came before Ye who lived with bipolar disorder; the late actress Carrie Fisher, who spoke at length during her life about the need to destigmatize mental illness, is just one of many public figures who have faced the challenging nature of bipolarity.

While it’s important to acknowledge his predecessors in this regard, we’ve yet to see someone as prominent as Kanye use social media in the midst of a manic episode. He has been extremely online since before social media, dating back to the early days of his innovative website Kanye Universe City, which he used as a blog in the aughts.

Since 2016, he has stepped up the frequency of his Twitter and Instagram “rants” that many have just attributed to his potent personality. I’ve gone through similar moments where I’ve hopped on the internet and railed against anyone and everyone who’s ever wronged me, and even people who haven’t. I’ve also posted things that flat out didn’t make any sense. The difference between me and Ye is that I’ve been granted grace and understanding from the vast majority of people who have witnessed me in the throes of mania, or depression. I also don’t have the entire world looking at me — friends, family, and strangers — in one of the most vulnerable positions a human could ever be in.

So when I see people discuss Kanye using intentionally disparaging tones and language, it gives me pause. It makes me wonder what the difference between us is, besides the millions of dollars and many Grammy Awards. It makes me question whether the support I’ve received has been genuine.

My goal is not to be the person who defends Ye at every turn. I don’t always agree with his actions, so that’s a role I can’t commit to. What I am here to do is make certain that nobody with this condition, including one of the most famous people on the planet, feels alone.