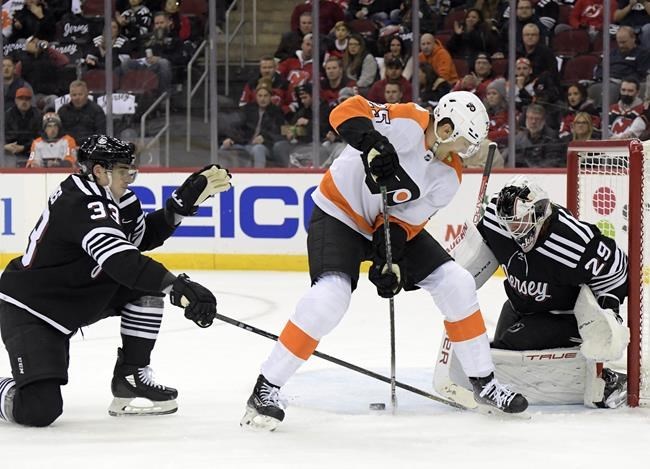 NEWARK, N.J. (AP) — Mackenzie Blackwood made 25 saves and the New Jersey Devils snapped a four-game skid and sent the reeling Philadelphia Flyers to their 10th straight loss, 3-0 on Wednesday night.

NEWARK, N.J. (AP) — Mackenzie Blackwood made 25 saves and the New Jersey Devils snapped a four-game skid and sent the reeling Philadelphia Flyers to their 10th straight loss, 3-0 on Wednesday night.

Jesper Bratt had a second-period goal and assisted on a power-play goal by rookie Dawson Mercer later in the period. Michael McLeod scored into an empty net late as the Devils beat the Flyers for the second time in 10 days.

Carter Hart had 24 saves for the Flyers, who fell to 0-2 under interim coach Mike Yeo. He took over on Monday after Alain Vigneault was fired.

The longest current skid in the NHL is 11, shared by Arizona and the New York Islanders.

Mikko Rantanen also scored twice for Colorado. Nathan MacKinnon, Nazem Kadri and Alex Newhook added goals, and Darcy Kuemper made 26 saves. Kadri, Devon Toews and Samuel Girard each had two assists as the Avalanche improved to 8-2-1 in their last 11 games.

Rangers defenseman Jacob Trouba had a goal and an assist and delivered a crushing check in the second straight game. One night after appearing to drive his right shoulder into the chin of Chicago’s Jujhar Khaira, sending the Blackhawks’ forward to the hospital and into concussion protocol, Trouba hit MacKinnon with a shoulder check midway through the second period. The Avalanche’s Gabriel Landeskog immediately dropped his gloves and squared off against Trouba.

Nils Lundkvist and Filip Chytil also scored for the Rangers, who lost at home for the first time since Oct. 25 against Calgary. Rangers rookie Adam Huska made his NHL debut and finished with 32 saves.

The Canucks winger patiently outwaited Bruins goalie Jeremy Swayman, and tucked a shot in behind his right skate. Bo Horvat also scored in the shootout.

Brock Boeser scored in regulation for Vancouver, which improved to 2-0 under new coach Bruce Boudreau.

Patrice Bergeron got a power-play goal for Boston on a 5-on-3 advantage early in the third.

Canucks goalie Thatcher Demko made 35 saves on his 26th birthday. Swayman stopped 31 of 32 shots for Boston.