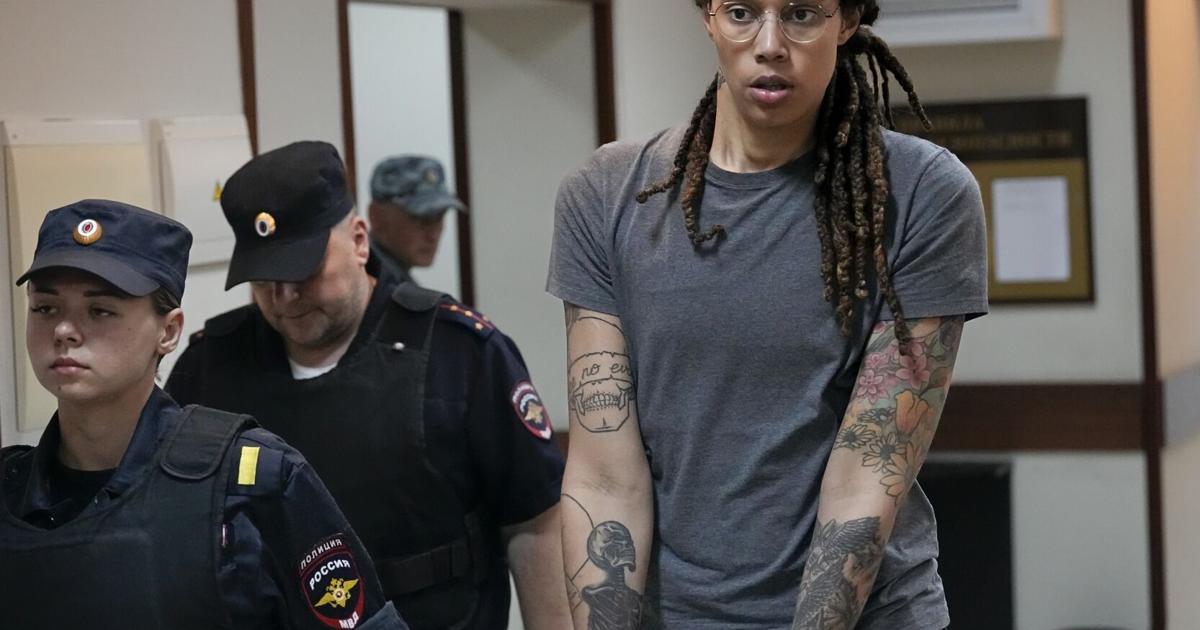 Here’s a look at trending topics for today, Aug. 4:

U.S. basketball star Brittney Griner was convicted Thursday in Russia of drug possession and sentenced to nine years in prison following a politically charged trial that came amid soaring tensions between Moscow and Washington over Ukraine and could lead to a high-stakes prisoner exchange between the two world powers.

The 31-year-old Griner, a two-time U.S. Olympic champion and a eight-time all-star with the WNBA’s Phoenix Mercury listened with a blank expression as an interpreter translated the verdict by Judge Anna Sotnikova. The judge also fined her 1 million rubles (about $16,700) fine.

The long-awaited merger of the two services will debut in the US next summer before being rolled out overseas, Warner Bros. Discovery announced on Thursday during its second quarter earnings call.

The company did not say if the new offering would have a different name than HBO Max and did not announce pricing for the new service.

Warner Bros. Discovery added that it plans to have 130 million global subscriptions with its streaming offering by 2025.

The federal government filed civil rights charges Thursday against four Louisville police officers over the drug raid that led to the death of Breonna Taylor, a Black woman whose fatal shooting helped fuel the racial justice protests that rocked the nation in 2020.

The charges — most of which stem from the faulty drug warrant used to search Taylor’s home — are an effort to hold law enforcement accountable for the killing of the 26-year-old medical worker. One of the officers was acquitted of state charges earlier this year.

“Breonna Taylor should be alive today,” Attorney General Merrick Garland said in announcing the charges, which include unlawful conspiracy, use of force and obstruction of justice.

China says it has conducted “precision missile strikes” in the Taiwan Strait as part of military exercises by its navy, air force and other departments in six zones surrounding the island. Japan says it protested to China after five of the missiles landed inside its Exclusive Economic Zone. The drills were prompted by a visit to the island by U.S. House Speaker Nancy Pelosi this week. They are intended to advertise China’s threat to attack the self-governing island republic in response to moves to solidify its de facto independence from Chinese rule. Taiwan has put its military on alert and staged civil defense drills, while the U.S. has numerous naval assets in the area.

After infuriating China over her trip to Taiwan, U.S. House Speaker Nancy Pelosi has met South Korean political leaders in Seoul. But she avoided making public comments on relations with Beijing and Taipei that could further increase regional tensions. Pelosi met the speaker of South Korea’s National Assembly and other senior members of Parliament on Thursday. After that meeting, Pelosi spoke about the bilateral alliance, forged in blood during the 1950-53 Korean War, and legislative efforts to boost ties, but didn’t mention her Taiwan visit or the Chinese protests. Pelosi later spoke by phone with South Korea’s president. After South Korea, Pelosi will travel to Japan.

Ukrainian officials say that powerful explosions have rattled the southern Ukrainian city of Mykolaiv and a city close to the country’s biggest nuclear power plant sustained a barrage of shelling, part of a series of new Russian attacks in several regions. Ukrainian authorities said shelling of a town in the eastern Donetsk region, where fighting has been focused in recent weeks, left at least eight people dead. And the mayor of the separatist-held city of Donetsk said Thursday that six were killed in shelling there. Ukraine’s presidential office in its daily update said nine Ukrainian regions came under fire over the previous day.

California firefighters made gains against the state’s deadliest and largest wildfire of the year jut as an entire eastern Washington town was being evacuated because of a blaze that was burning homes. At about 1:30 p.m. the Adams County Sheriff’s Office said on Facebook that about 10 homes in Lind had burned.  Homes, infrastructure and crops were threatened. Lind is a community of about 500 people approximately 75 miles (121 kilometers) southwest of Spokane. In California, forecasters warned Thursday that spiking temperatures and plunging humidity levels could create conditions for further wildfire growth.

Jurors in the trial of Florida school shooter Nikolas Cruz have toured the still-bloodstained building where he murdered 17 people four years ago. The 12 jurors and their 10 alternates were bused to Parkland’s Marjory Stoneman Douglas High School on Thursday along with the judge, prosecutors and Cruz’s attorneys. Cruz wasn’t present. The area was closed off to keep protesters away and protect jurors’ safety. The three-story classroom building was sealed after the Valentine’s Day 2018 shooting. The floors remain bloodstained and the walls bullet-pocked. Rotted holiday flowers and deflated balloons are in the rooms. The jury will decide if Cruz is sentenced to death or life without parole.

Conspiracy theorist Alex Jones says he now understands he was irresponsible to declare the Sandy Hook Elementary School massacre a hoax, and he now believes it was “100% real.” The jury in Austin, Texas, began deliberating Wednesday how much the conspiracy theorist and Infowars host owes the parents of one of the children who were killed in the 2012 attack in Newtown, Connecticut. Testimony wrapped up with Jones telling the jurors that any compensation above $2 million would sink his Texas-based company. Jones also acknowledged that he was wrong to push false claims that the massacre didn’t happen. The parents suing Jones testified Tuesday that an apology wouldn’t suffice and that Jones must be held accountable. They are seeking at least $150 million.

A Louisiana judge has refused to set any bond for rapper Mystikal, who is accused of raping and choking a woman at his home outside Baton Rouge. The Advocate reports that state District Judge Steven Tureau ruled on Tuesday that evidence against 51-year-old Michael Tyler, his past history and the victim’s fears met the standard for holding him without bond. Defense attorney Roy Maughan Jr. maintains that Tyler is innocent. But he told the newspaper after the hearing that Tyler probably won’t appeal the judge’s ruling.

Chrissy Teigen and her husband John Legend are expecting another child nearly two years after the couple suffered a pregnancy loss. Teigen made the announcement Wednesday on Instagram where she posted two photos of her baby bump. The 36-year-old model and cookbook author wrote “we have another on the way” in a post that comes after she had a miscarriage in 2020. She touched on her fertility journey and being too nervous to unveil her pregnancy. The couple share two children together.

In a highly unusual move that has rattled Hollywood, Warner Bros. axed the “Batgirl” film planned for HBO Max, opting to shelve the $90 million film as the reorganized studio revamps its approach to streaming and DC Comics films. The studio ultimately decided the nearly completed “Batgirl” didn’t merit either a streaming debut or a theatrical release. Warner Bros. instead is choosing to entirely write off the film starring “In the Heights” star Leslie Grace as Batgirl and co-starring Michael Keaton (returning as Batman), J.K. Simmons and Brendan Fraser. Production wrapped in April.