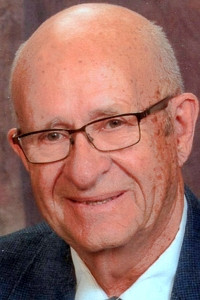 Howard “Jim” Horner, 86, of Toronto, handed away on Tuesday, May 3, 2022, on the Dougherty Hospice House in Sioux Falls.
A Mass of Christian Burial can be held on Saturday, May 7,, at St. Paul’s Catholic Church in White, South Dakota, starting at 1 p.m. There can be a time of fellowship and low and truffles served on the church following the service.  Interment will happen on the Toronto Cemetery following the time of fellowship.
Visitation can be held the night prior, Friday, May 6, , on the Eidsness Funeral Chapel in White from 5 p.m. till 7 p.m.  There can be a Masonic service held at 4:30 p.m. Friday night previous to the start of visitation.  A wake service can be held on the chapel following the visitation, starting at 7 p.m.
Jim was born Aug. 16, 1935, to Russell and Jennie (Schilling) Horner on the Horner farm close to Toronto, South Dakota.  He graduated from Toronto High School in 1953 and South Dakota State University in 1957 with a Bachelor of Science diploma in Ag Engineering. He farmed his total grownup life till the age of 80 however remained dwelling on the house place which was in his household since 1909.  He took nice delight in maintaining the household farm. He was proud to have the farm acknowledged as a Century Farm in 2009.
On Sept. 23, 1971, he married Rosella Meis Schutterle on the Catholic Campus Parish in Brookings, SD. He was latter baptized there on the CCP. He was a member of St. Paul Catholic Church in White, SD.
Jim was additionally a member of Washington 11 Masonic Lodge in White, SD., Yankton Scottish Rite,  a previous member of Brookings York Rite, and a present member of  the The  El Riad Shriners of Sioux Falls, SD.
He served on the Ag First Elevator Board, The Toronto Cemetery Board, and Crop Improvement Association.  Jim and Rose wintered in Texas for a few years after which in Arizona for a number of years.  They loved touring, sq. dancing and Jim most of all loved farming.
Survivors embody his spouse, Rosella, two step granddaughters, Jayne (Mark Kimoto) Leapley and Sara Leapley, two step-great-grandsons, Logan and Declan Kimoto; two sisters, Arlyce (Jerry) Nelson and Mary (Roger) Berge; nieces Victoria (Craig Carrison) Nelson, and Cheryl (Gerry) Wills and their daughter Emily Wills; niece Suzanne (John) Harrenga and son Nate; and Nephew Todd (Kelly) Berge and Matthew and Laura.
He was preceded in demise by his dad and mom Russell and Jennie Horner and his  step daughter Becky.