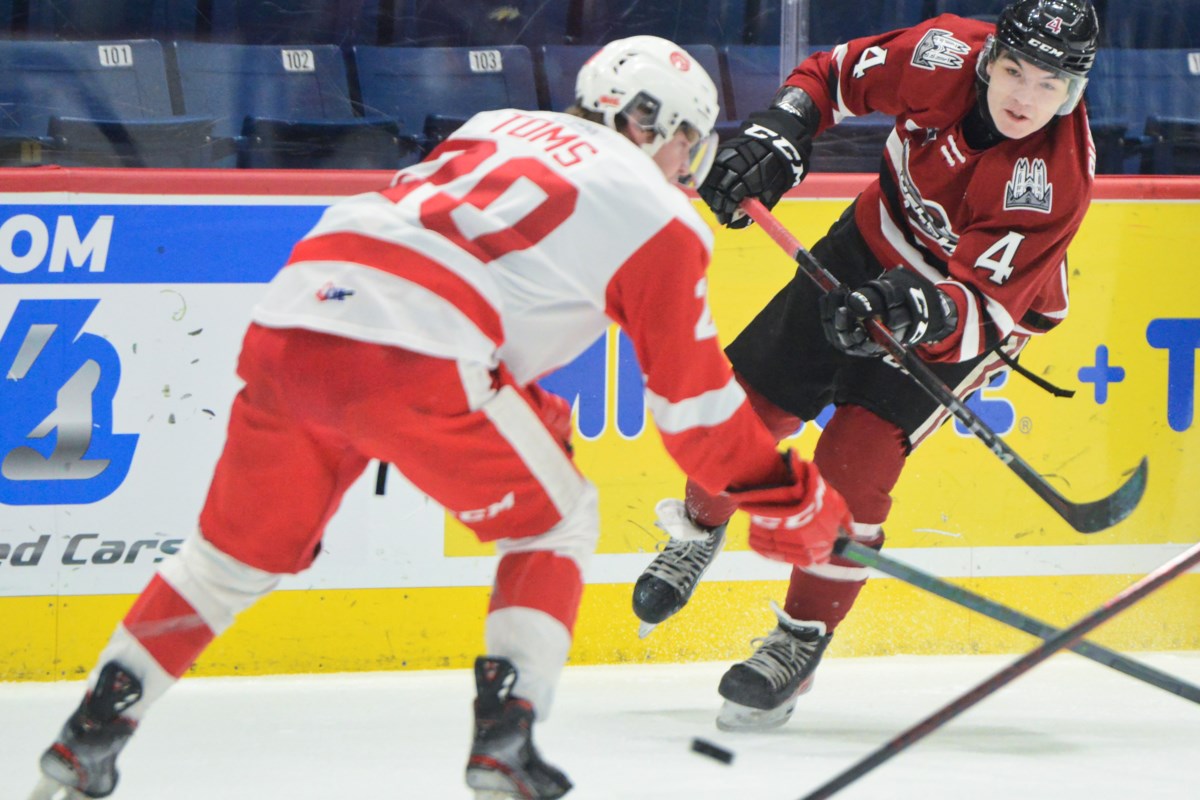 Michael Buchinger has been one of the biggest surprises this season for the Guelph Storm, at least those that hadn’t seen him play before.

A second round draft pick in 2020, the 17-year-old has been paired with fellow rookie Cam Allen most of the season. The two have looked more like seasoned veterans than guys with just 30 OHL games under their belts.

Buchinger picked up an assist Friday night as the Storm fell 4-2 to the Sault Ste. Marie Greyhounds at the Sleeman Centre. He now has 18 points on the season, which is third among rookie defencemen in the OHL. He is also a plus-11.

“Cam’s a great player and we complement each other well. We kind of play off each other and playing together for so long we’re starting to get to know each other better,” said Buchinger, adding that the two are pretty close off the ice as well.

The six-foot, 175-pound Markham native was ranked 36th among North American skaters by NHL Central Scouting in the mid-season rankings for this summer’s NHL draft, one of six Storm players to be ranked.

As for the attention he’s getting from NHL scouts, many of who were in attendance Friday night, Buchinger said he takes it in stride.

“You hear about it, but it’s definitely early on in the season so you try not to think about it, just keep pushing and hopefully climb the rankings as well.”

“For a young kid playing his 30th game in the league he handles himself like a wily veteran; he’s smart, he competes hard and he’s got a great stick,” Burnett said.

“He’s been very consistent most every night and his numbers speak for themselves. I think he’s turning a lot of heads.”

Guelph continues to have its struggles with the Soo this season. Friday was their fourth loss in six games against the Hounds.

The Storm outshot the visitors 41-30 but couldn’t capitalize on some early chances in close as Soo netminder Tucker Tynan held them at bay.

They trailed 3-0 heading into the third period before late goals by Allen and Valentin Zhugin made the game appear a little closer than it really was.

Two of the Soo’s goals came on the power play, one came shorthanded.

One of Guelph’s goals came when the Hounds mistakenly had only four players on the ice.

“But we can definitely battle with them. We haven’t shown our true potential against them.”

Guelph started Friday night in second place in the Western Conference, but in a conference where six points separate the top five teams, they finished the night in fifth place, six points back of the Soo, although the Hounds have played six more games.

“I think ou lack of pace and our lack of overall energy showed tonight,” Burnett said.

“We had some opportunities tonight. If we get one when it’s 1-0, maybe that changes the game a little bit,” said Burnett.

He said it’s time for patience as the team gets back to full health and full fitness after several players battled COVID and everyone missed practice time.

“We’ve got to stay positive with the guys,” said Burnett, looking forward to a week of practice next week when the team doesn’t have any mid-week games.

The Storm hosts London Saturday at 7 p.m. then plays in London Sunday at 2 p.m.