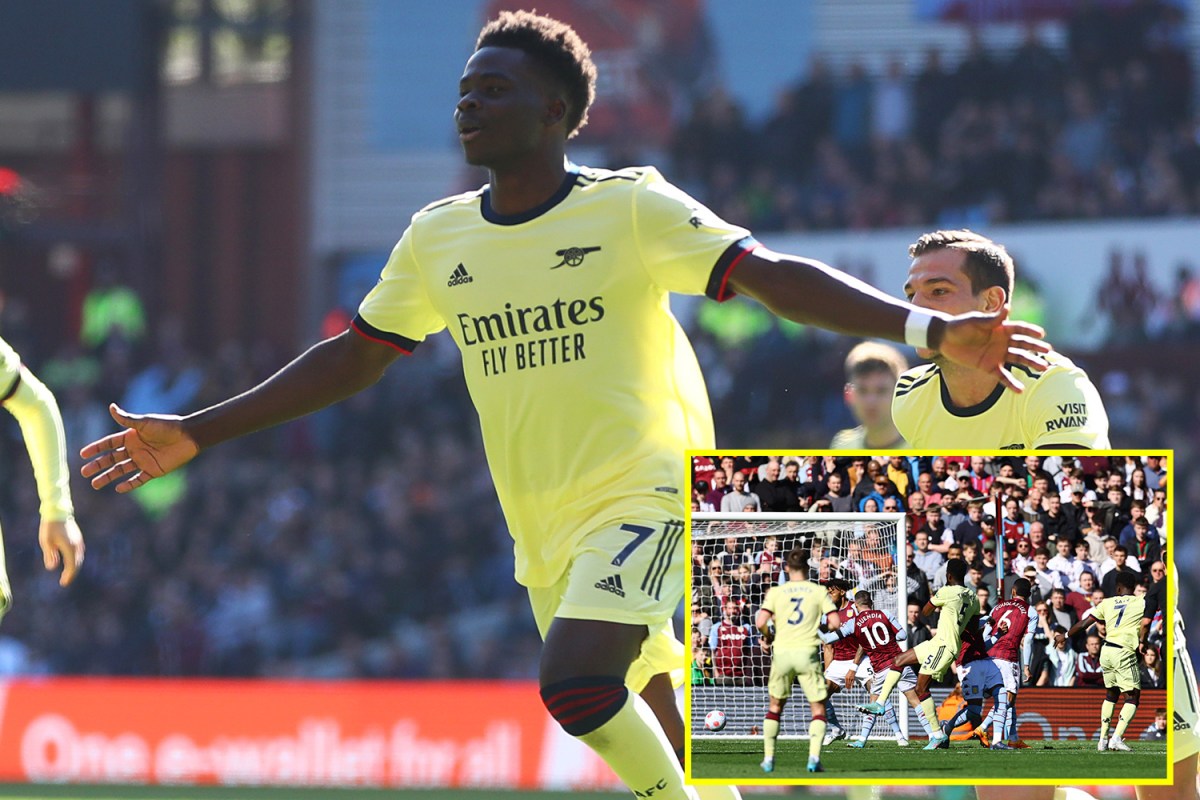 Arsenal star Bukayo Saka has been called a ‘ridiculous threat’ who ‘the best left back in the world wouldn’t be able to deal with’ following his match-winning display against Aston Villa.

The ball barely left Saka’s feet during the 1-0 victory over Villa with the 20-year-old the focal point of the game as Arsenal strengthened their grip on a Premier League top four finish.

Saka, who’s well known for his versatility, started on the right of a front three against Villa, and was a constant threat before scoring the winner on the half hour mark.

The academy graduate has become a first team regular under Mikel Arteta, regularly improving since his 2018 professional debut with the club to become an undroppable star.

Saka has also become an England star during a short but storied career so far, and has been crucially important this season with the Gunners front runners to clinch fourth place and return to the Champions League.

The Ealing-born youngster now has a career best nine goals and five assists in 28 league games this season, the most of any Arsenal player, and scored yet another crucial goal, guiding home from long-range.

Aston Villa legend and talkSPORT host Gabby Agbonlahor was at Villa Park to witness the Saka show, and felt plenty of sympathy for former teammate Ashley Young who was run rugged by a player 16 years his junior.

Agbonlahor explained: “Saka looks like a ridiculous threat, even Ashley Young today I said to him after the game, ‘the best left back in the world wouldn’t have been able to do any better against Saka today’.


Carragher or Ferguson? Pimblett and McCann debate who would win


Redknapp reveals he told Lampard to sign Alli, but now wonders ‘what happened to him?’

“He was frightening, comes short and running long, his pace, the way he runs so direct, honestly he was outstanding.”

Agbonlahor also had praise for Arsenal as a whole, who overcame a midweek loss against Liverpool to keep their positive momentum of six wins in seven games.

Arsenal now have a four-point cushion to fifth-placed Manchester United, who have even played a game more.

And it was the resilience that stood out, with Villa barely able to trouble Arsenal’s compact system, losing out in both possession and shots on goal.

“Today I’ve seen a side of Arsenal that I’ve not seen for a long time,” Agbonlahor said. “They were so comfortable in the game.

“Defensively Ben White, Gabriel, [Kieran] Tierney, [Thomas] Partey and [Granit] Xhaka didn’t really leave that centre of the pitch, there was no space for [Emiliano] Buendia or [Philippe] Coutinho to get on the ball.

“[Ollie] Watkins was isolated and it was a really comfortable afternoon for Arsenal.

“If they can put in performances like that until the end of the season they will 100 per cent get top four.”