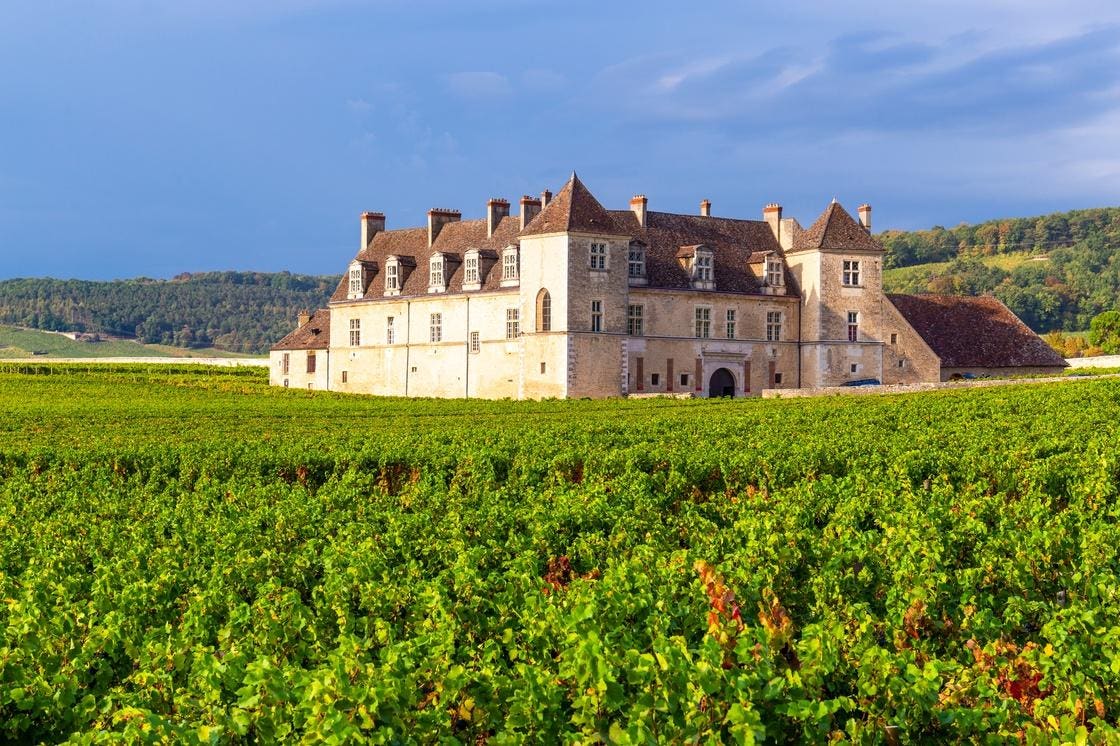 The 2021 Côte de Nuits vintage from Burgundy is scant in quantity, but includes precious and subtle qualities.

The 61st Hospices de Nuits-Saint-Georges wine auction was held last weekend in the Burgundy region of France—located about two thirds of the distance between the cities of Paris and Geneva. It raised 2.49 million Euros ($2.73 million) in hours. The event began in true French fashion—with a feast.

Hundreds of guests sat inside a wood paneled room in the ancient Clos de Vougeot monastery—located a ten minute drive north of the town of Nuits-Saint-Georges. They wore ties, jackets and dresses, but also down jackets and sneakers. The group included ex-Tour de France cycling champion Bernard Hinault, as well as a previous chef for U.S. President Reagan, and wine brokers from throughout the world.

Before this lunch, guests had first visited a dim cellar to taste juice from the 108 barrels of Pinot Noir red wine and one barrel of Chardonnay white wine up for auction. Within minutes the profile of the 2021 vintage emerged: bright and lambent acidity integrated with spry aromas of slightly wild red fruits—country lane strawberries and young raspberries—before a background of subtle, silky tannins.

After this initial tasting and lunch, the auction took place in another stone room draped with tapestries within Clos de Vougeot. Tension buzzed: considering that severe frost and gripping mildew wiped out most of Burgundy’s 2021 vintage, would this year’s sales meet expectations?

The sale began at 3:14 p.m. The first lot was a 228-liter barrel of Nuits-Saint-Georges 1er Cru Les Murgers—Cuvée Guyard de Changey. It was expected to fetch a high of 20,000 Euros ($22,086), but when the gavel dropped at 3:16 p.m. it had sold for 35,000 Euros ($38,650)—setting the tone of the auction as ambitious. (This wine is both a hefty and classic Nuits-Saint-Georges red, with powerful aromas of dark fruit and spice, arresting flavors and plush tannins.)

Sales continued to shatter expectations. Consider Lot 23—a barrel of Nuits-Saint-Georges 1er Cru Les Boudots—Cuvée Mesny de Boisseaux: this was also expected to sell for a high of 20,000 Euros, but instead raked in 38,000 Euros ($41,963). (The wine is stunning: perky aromas of wild strawberries, and deep dark classic flavors of cherries coated in shining acidity). The single barrel of white wine was Lot 73—Nuits-Saint-Georges 1er Cru Les Terres Blanches Cuvée Pierre de Pême—which pulled in 52,000 Euros ($57,424), or more than double the high of 24,000 Euros expected.

After this sale of the white wine, singer/actress Élodie Frégé stood beside auctioneer Hugues Cortot and led the audience in a hand clapping singalong.

Lot 80 was a special ‘charity barrel’ that auctioned for 22,481 Euros ($24,825). This includes a special blend of premier cru wines from nine estates, with juice from both northern and southern Burgundy, from grapes harvested on both high and low slopes, and from vines of different ages. The proceeds go directly to APF France Handicap—an organization founded in 1933 to assist those with disabilities and their families throughout France.

An hour and forty five minutes after the auction began, the 109 barrels had sold for a total of 2.486 million Euros ($2.745 million)—almost 30% above the total gained at last year’s auction.

This Nuits-Saint-Georges auction is separate from a similar Burgundy auction that takes place each year in the city of Beaune—a half hour drive to the south. Both auctions raise funds to support hospitals, and they are complimentary rather than competitive. For example, at lunch I sat beside Charlotte Fougere—Deputy Mayor of Beaune—who, with a woman’s group from that city, attends this Nuits-Saint-Georges auction each year to purchase a barrel. Also, the first wine served at lunch came from the Hospices de Beaune estate.

The current iteration of the Hospices de Beaune wine auction began 101 years before that of Nuits-Saint-Georges, but the Beaune hospices (or a hospital for those who lack funds) originated in the 15th century, while that of Nuits-Saint-Georges originated a few hundred years earlier—in the year 1270. Still, what is a few centuries among friends? The complementarity of these events also increases publicity for both, similar to what occurs for two renowned wine auctions in the U.S.: in Naples in Florida and in Napa Valley in California. The ties of amenability and collaboration that endure between these auctions also helps promote the wines, food and culture of the entire Burgundy region.