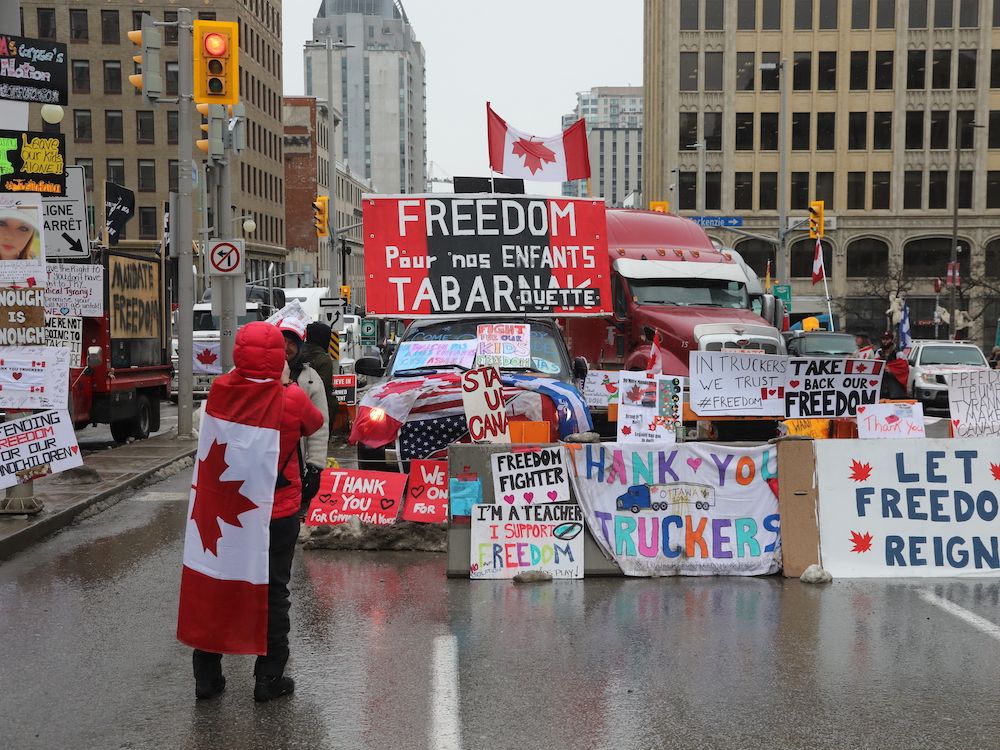 Heavily-redacted minutes of a cabinet meeting held on the eve of the Trudeau government’s invocation of the Emergencies Act suggest officials were on the brink of a potential breakthrough with the Freedom Convoy blockade of downtown Ottawa, court documents suggest.

The revelation, first reported by the Toronto Star, is contained within minutes of a cabinet meeting held Feb. 13, one day before Prime Minister Justin Trudeau announced Canada’s first-ever invocation of the Emergencies Act to clear ongoing Freedom Convoy blockades in downtown Ottawa and at land border crossings across the country.

The meeting, chaired by the the Prime Minister and attended by senior cabinet and government officials, included an update from National Security and Intelligence Advisor Jody Thomas that hints at unexplained and unelaborated progress being made in clearing blockades.

“The National Security and Intelligence Advisor indicated that law enforcement gains have been important and that there was potential for a breakthrough in Ottawa, Ont. and that the RCMP was taking enforcement action in Coutts, Alta.,” read the document under a heading entitled ‘situation update.’

“Additionally, she noted that the RCMP is assisting in various impacted areas across the country and is focused on areas where enforcement or the risk of escalation is most acute.”

As the rest of the document was blacked out prior to disclosure, no details on this breakthrough was provided.

The meeting was held between 8 and 10 p.m. on Feb 13, the evening before the Prime Minister announced the invocation of the Emergencies Act — the first time the legislation had been used since its inception in 1988 as a replacement for the War Measures Act.

Unredacted portions of the minutes also say Thomas advised a number of border crossings were still experiencing blockages, despite efforts by local police to keep them open.

“The National Security and Intelligence Advisor informed minister that, overall, social media continues to play an active role in the communication and organization of protestors across the country, and that the tactic of using slow roll vehicle activity seems to have been effective,” the minutes read.

“She noted that the threat picture with respect to ideologically motived violent extremism remains stabled and changed, and that the Canadian Security and Intelligence Service continues to watch persons of interest.”

The minutes were just one of 11 documents made available in the disclosure, all heavily redacted and containing few details.

Despite also seeing heavy attention from government censors, minutes of an Incident Response Group meeting held earlier on Feb. 13th contained an update from Public Safety Minister Marco Mendicino where he reported “great progress” had been made to secure the Ambassador Bridge in Windsor, Ont., but no timeline existed on when the bridge may re-open.

The week-long blockade of the Ambassador Bridge would end that evening, following negotiations with protestors and a number of arrests.

Marked ‘secret’ and heavily redacted, the records were released as part of disclosure for ongoing court challenges commenced by the Canadian Constitutions Foundation (CCF) and the Canadian Civil Liberties Association (CCLA,) arguing the threshold for invoking the act wasn’t met.

Lawyers for both organizations appeared before Federal Court Justice Richard Mosley earlier this week seeking release of the unredacted documents as part of their challenge.

The minutes also document measures the government was willing to take to ensure blockade vehicles were towed away, including securing a “list of individuals in different geographic locations capable of operating trucks and other vehicles belonging to protestors,” as well as those “capable of operating tow trucks.”

Alexander Cohen, spokesperson for Minister Mendicino, told the National Post the potential for breakthroughs referred to negotiations “led principally by the City of Ottawa with illegal blockaders” in the days leading up to the government’s invocation on the Emergencies Act.

“The government closely monitored the status of negotiations, which were disavowed by many associated with the so-called Freedom Convoy and were ultimately unsuccessful,” Cohen said.

“The government considered this as a factor in the decision to invoke the Emergencies Act.”