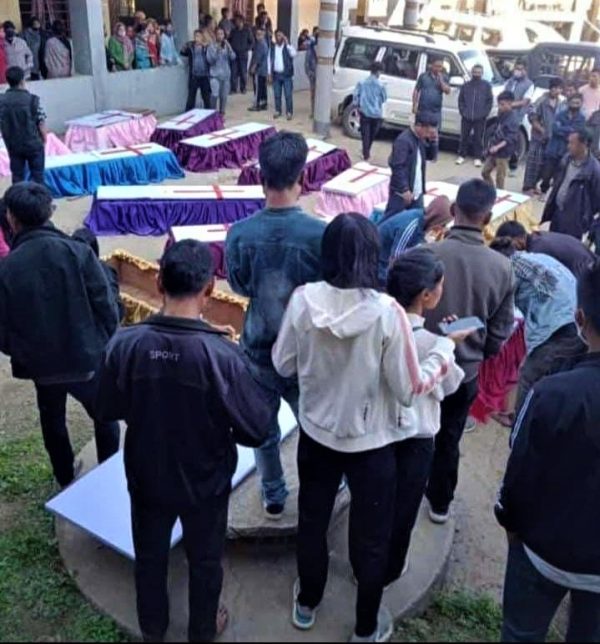 Funeral of civilians killed by Indian security forces at Mon in Nagaland, India on December 6, 2021.

The demand for the repeal of a draconian law that gives extraordinary powers to the security forces in counter-insurgency operations has been reignited in several states across India’s frontier zone of the Northeast, following the killing of innocent civilians by the Indian Army in an incident dubbed by the latter as a case of  “mistaken identity.”

The incident happened on December 5 at Mon in the Indian border state of Nagaland, when a squad from the army’s 21 Special Forces gunned down six coal mine workers travelling in a pick-up van. Apparently they were mistaken for militants.  Following their killing, a clash erupted between the forces and local villagers in which seven more civilians and one personnel from the commando squad were killed. The following day another person was shot when an enraged mob vandalized an outpost of the Assam Rifles at Mon.

Assam Rifles has expressed regret over the killings and said that the operation had been planned after the receipt of “credible intelligence” about the movement of insurgents in Oting.  The army has also ordered a court of inquiry to be headed by a major general to probe all the circumstances resulting in the botched operation.

All these decisions notwithstanding, the killings sparked huge outrage in India’s Northeast, reigniting the old demand for the repeal of the controversial Armed Forces (Special Powers) Act 1958, which gives security forces extraordinary powers in counter-insurgency operations.   The view is widespread across the region that the law has fueled senseless killings of innocent civilians.

After the killings in Mon, chief ministers from the three states of Nagaland, Meghalaya, and Manipur in the country’s Northeast demanded the revocation of the law. Civil society organizations too have raised similar demands.

In an unprecedented development, the Nagaland government has decided to hold a special assembly session December 20 to discuss the AFSPA. It is likely to pass a resolution seeking the repeal of this law.

The AFSPA was promulgated by the British colonial government during the Quit India movement in 1942. After India gained independence five years later, Prime Minister Jawaharlal Nehru retained the Act owing to disturbed conditions in the Naga-inhabited areas in the Northeast.

Currently, the law is operational in Assam, Manipur, Nagaland, and parts of Arunachal Pradesh in the Northeast and in Jammu and Kashmir. It can be imposed by the central and state governments in a state or parts of a state that have been declared “disturbed’’ under the same act.

The act allows the armed forces to open fire, even causing death, against any person carrying arms and ammunition and gives them powers to arrest individuals on the basis of “reasonable suspicion,” and also search premises without warrants. It also grants impunity to the security personnel involved in such operations as there can be no legal proceedings against them without the prior approval of the central government.

However, the act also says that the armed forces must act in cooperation with the district administration of the state and not as an independent body. In the Mon operation, the police have said they were unaware of the operation. The Nagaland government has constituted a five-member Special Investigation Team (SIT) of the state police to probe the incident.

Despite these recommendations, repeal of the law continues face opposition from the army and some state governments in the Northeast. In 2018, the army made a fervent case for its retention in Jammu and Kashmir with the rationale that the gains achieved in bringing down levels of insurgency and infiltration could reverse without the special powers. Four years ago, India’s Home Ministry suggested repeal of the law from some areas in the Northeast. This was resisted by BJP governments in Assam and Manipur.