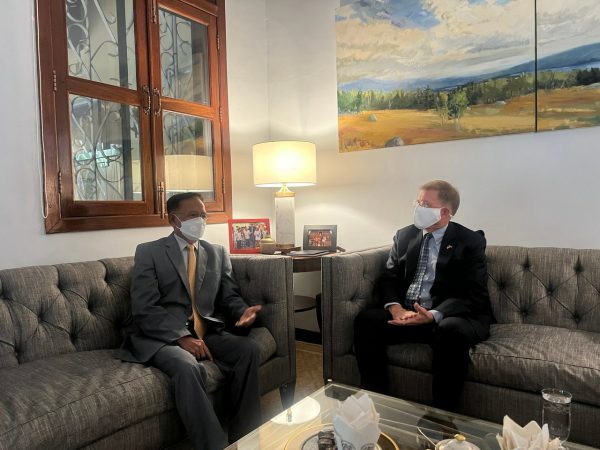 Cambodia today recommenced the treason trial of Kem Sokha, the leader of the dissolved Cambodia National Rescue Party (CNRP), after a nearly two year hiatus. Sokha was arrested in September 2017 for allegedly colluding with foreign governments to overthrow the administration led by Prime Minister Hun Sen and the Cambodian People’s Party (CPP), the prelude to the dissolution of the CNRP two months later.

“I hope…the court will decide to drop the charges against me so that we can reach national reconciliation and national unity to develop our country,” Kem Sokha told reporters at his home this morning, according to Reuters.

Sokha’s arrest and the banning of the CNRP, which performed surprisingly well at elections in 2013, marked Cambodia’s definitive turn toward open one-party rule, and took place amid a wider offensive against civil society organizations and the independent press. With most of the CNRP’s leading officials either in custody or exile, the ruling Cambodian People’s Party (CPP) was free to win every seat in parliament at elections in July 2018.

After spending a year locked up in the maximum security CC3 prison in eastern Cambodia, Sokha was released into house arrest in 2018, and later into a looser form of custody known as “court supervision.” His trial initially opened on January 15, 2020, but was halted by the authorities in March of that year, supposedly due to COVID-19. In January of last year, the court informed Sokha that his case was no longer a “priority” and was unlikely to resume in 2021.

With his case in a state of suspended animation, Sokha has been barred from engaging in formal political activities, but has been allowed to participate in a range of quasi-political pursuits like distributing donations to villagers and monks, and meeting with foreign ambassadors.

The treason charge against Sokha, which the government has linked to a speech that he gave in Australia in 2013 in which he allegedly boasted about support from Western democracy promotion advocates, is widely viewed as a purely political confection.

“The resumption of Kem Sokha’s trial in Phnom Penh after an almost two-year hiatus doesn’t alter the fact that these bogus, politically motivated charges should have never been brought against him in the first place,” Phil Robertson of the U.S.-based organization Human Rights Watch said in an emailed statement. “There is absolutely no possibility of justice for Kem Sokha in Cambodia’s highly politicized courts.”

As such, the upcoming trial proceedings will do little to improve the Cambodian government’s image in the eyes of many Western governments. During the initial hearings in Sokha’s trial, Cambodian government lawyers failed to make public any substantial evidence for its accusation, which the United States government has described as a clutch of “fabricated conspiracy theories.” Of course, the proceeding is an exercise in domestic political theater designed to dramatize Sokha’s real “crime” – opposition to the CPP – and to provide him a pathway to a political rehabilitation on terms favorable to Hun Sen.

For this reason, there is very little chance that Sokha will serve a lengthy prison term. History suggests that the more likely outcome, after the handing down of the expected guilty verdict and sentence, is that Sokha will be granted a royal amnesty on Hun Sen’s request. At that point, the government could well allow Sokha to return to the political fold and compete in some form in commune-level elections due in June, or, failing that, in next year’s national elections.

The chance of a limited political rehabilitation for Sokha, after nearly five years of legal and political limbo, has been increased by his recent break with exiled frenemy Sam Rainsy, with whom he formed the CNRP in 2012. Now that the unity of Cambodia’s opposition has been broken – Hun Sen’s political goal since the close-run election  of 2013 – he is in a position, at least for now, to be benevolent.

What Hun Sen won’t allow Sokha is the capacity to mobilize threatening levels of support, ensuring that the treason charge continues to hang over the leader, even if he is granted a degree of political rehabilitation.