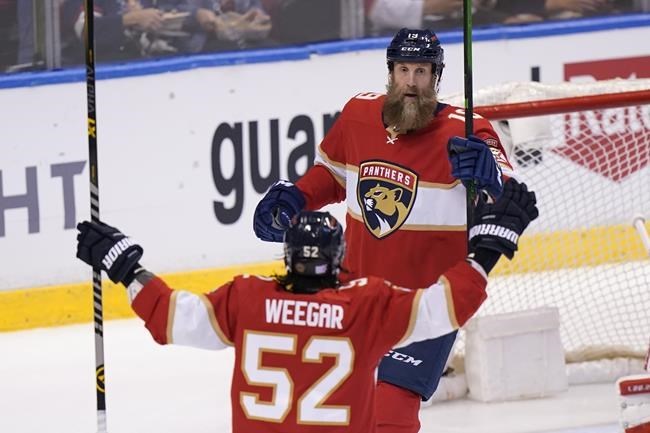 Trailing 4-1, the Panthers scored four goals on a season-high 26 shots in the third period to snap a two-game skid.

Eetu Luostarinen and Ryan Lomberg each had a goal and an assist. Sam Bennett and Joe Thornton also scored goals for the Panthers, and Sergei Bobrovsky stopped 23 shots.

Nick Jensen had a goal and an assist for the Capitals. Lars Eller, Beck Malenstyn and Connor McMichael also scored goals. Ilya Samsonov made 45 saves.

NHL teams had lost 303 consecutive games when trailing by three or more goals entering the third. The last team to pull off such a comeback was, ironically, the Capitals — who on Jan. 18, 2020, trailed the New York Islanders 4-1 entering the third and went on to win 6-4.

Joe Pavelski had a goal and two assists for the Stars, who were outshot 40-17 and have won six straight home games — the longest current winning streak in the NHL. Holtby made 39 saves in his 500th regular-season game.

Jesperi Kotkaniemi scored in the third and Frederik Andersen stopped 13 shots for the Hurricanes.

BOSTON (AP) — Marc Staal’s first goal of the season was the tiebreaker with just over eight minutes remaining in the third period, and Alex Nedeljkovic made 41 saves, leading Detroit over Boston.

It was the Red Wings’ 3,000th victory. Filip Zadina also scored for Detroit, which won its third straight.

Boston coach Bruce Cassidy missed the game after being placed in the NHL’s COVID-19 protocol earlier in the day.

Joel Eriksson Ek, Jonas Brodin and Marcus Foligno also scored for Minnesota, which leads the NHL with 59 goals scored since Nov. 2. The Wild have won four games in a row and scored 19 goals in that span.

Clayton Keller and Anton Stralman scored for Arizona, which has lost three of four.

After rookie Karel Vejmelka posted his first career shutout a night earlier at Winnipeg, Scott Wedgewood made the start in goal and stopped 32 shots for Arizona.

St. Louis erased an early three-goal deficit and has won its last five against the Lightning, the two-time defending Stanley Cup champions.

Tampa Bay scored two goals in a team-record five seconds and jumped to a 3-0 lead after just 5:29 in a matchup between teams that have combined to win the past three NHL titles.

Noah Gregor, Jacob Middleton and Erik Karlsson also scored for the Sharks, who have started their five-game road trip at 2-0.

Tomas Tatar and Jesper Bratt scored for the Devils, and Mackenzie Blackwood had 26 saves.

Yakov Trenin and Nick Cousins also scored, and Mikael Granlund assisted on all four of Forsberg’s goals. The Predators have won two of three.

The shutout was the 15th of Saros’ career.