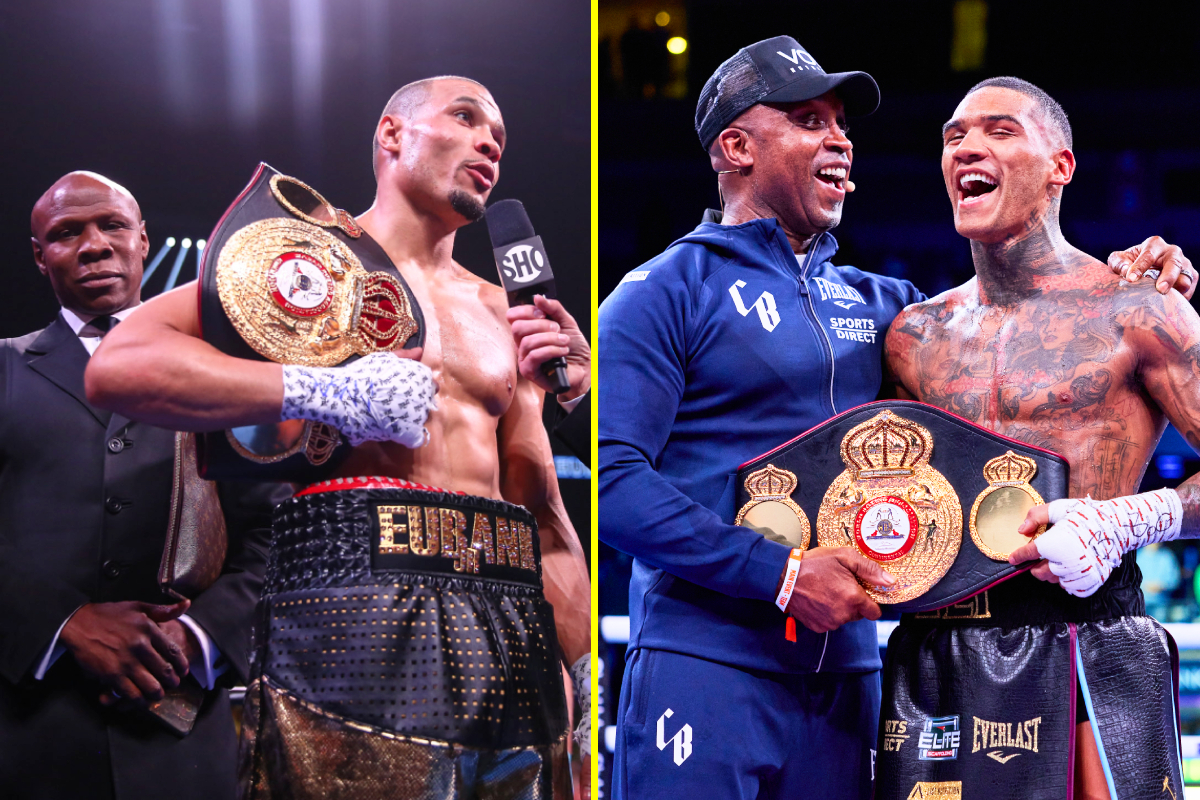 Chris Eubank Jr will face Conor Benn in a catchweight fight on October 8 at the O2 Arena in London.

The sons of boxing legends Chris Eubank Sr and Nigel Benn are set to reignite an historic family rivalry which captured the attention of the entire country back in the 1990s.

The pair did not attempt to hide their distaste for one another in what was a fascinating pre-fight build-up.

Their meeting very much delivered in the ring too, with Eubank coming out on top of the action packed showdown by securing a ninth-round stoppage win, despite having been floored himself in the previous round.

Benn and Eubank went to war for a second time and on this occasion took each other the full 12-round distance.

Many thought Benn had done enough to edge victory in the rematch, however the judges ultimately scored the bout a draw and sadly a trilogy fight was never made between them.

Now, almost 30 years on, their sons are set to take up the mantle.

Eubank Jr, now 32, has been on the professional boxing scene for a significant amount of time now as it has been over a decade since he first began to follow in his father’s footsteps.

While he is yet to win a legitimate world title, he has already been involved in a series of entertaining domestic showdowns, including defeats to Billy Joe Saunders and George Groves, and victories over James DeGale and Liam Williams.

He remains unbeaten to date as one of the highest rated young prospects in the world, though is yet to compete anywhere close to elite level.

When Benn entered the pro boxing world six years ago, some hypothesised about a potential future meeting with Eubank Jr, though they were quickly shot down.

At the time, Eubank Jr was competing at super-middleweight (168lbs), while Benn began at super-lightweight (140lbs).

In the time since though, Benn has moved up and campaigned at welterweight (147lbs), while Eubank Jr dropped down to his more natural division of middleweight (160lbs).

Now the pair will meet at a catchweight between those two divisions in an enormous PPV blockbuster.

Eubank Jr said: “I grew up watching their [Chris Eubank Sr and Nigel Benn’s] legendary battles and always wanting to emulate that, and find my own arch nemesis. Could this now be Conor Benn? We will find out.

“He has walked the same path as I have. I know his struggle. Living in the shadow of a legend and trying to break out of that shadow and make his own name. If he can beat me, his name will be made, and he will never walk in his father’s shadow again.

“It’s a fight that’s going to spark the imagination of the British public, that’s what I’m happy about. In terms of anticipation, legacy and hype it’s the biggest fight of my career.”

Benn added: “This fight is for the legacy and was an opportunity I felt I couldn’t pass up.

“This fight is embedded with so much history and I know it’s one the public really want to see. To me this fight is personal – it’s more than titles and rankings, this is unfinished business between our families!

“Born Rivals is the perfect calling for this fight, because we have always been associated and I’ve always been asked if we’d ever fight, and now I can’t wait for the world to be able to watch us make that happen.

“All I know is that from my side, this will be an all-out war, last man standing kind of fight. Neither will give up until the last bell rings. I won’t be looking to take this to the score cards though, this will be explosive from the off. I’m so up for this.”

Deposit min £/$/€10 using promo code 888ODDS • Bet up to £/$/€5 on your selection at normal odds in the regular market • If your selection wins, we’ll pay you out at the normal price and any extra winnings from the advertised enhanced price will be paid to you in Free Bets • Free Bets are granted within 72 hours and expire after 7 days • Free Bet stakes are not included in returns • Deposit balance is available for withdrawal at any time • Restrictions apply to withdrawals, payment methods and countries & Full T&C’s apply 18+ begambleaware.org