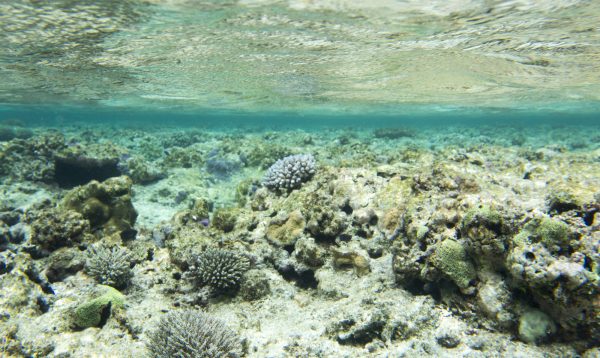 It was the silence of the sea that first rattled the teenage snorkeler, followed by a sense of horror as she saw the coral below had been drained of its kaleidoscopic color. This once-vibrant site on Australia’s Great Barrier Reef — a site she’d previously likened to a busy capital city — had become a ghost town, the victim of yet another mass bleaching event.

On that day in 2020, Ava Shearer got out of the water and cried. Today, with the release of a United Nations climate report that paints a dire picture of the Great Barrier Reef’s future, the now-17-year-old marine science student and snorkeling guide wonders what will be left of the imperiled ecosystem by the time she finishes her degree at Australia’s James Cook University.

“I definitely worry about it,” says Shearer, who grew up along the World Heritage-listed natural wonder off Australia’s northeast coast. “I fear there might not be anything for me to study.”

There is much for the world to fear in Monday’s Intergovernmental Panel on Climate Change (IPCC) report, which bluntly states that the Great Barrier Reef is in crisis and suffering grave impacts from climate change, with frequent and severe coral bleaching caused by warming ocean temperatures. The worst bleaching event, in 2016, affected over 90 percent of the reef, and a punishing succession of bleaching incidents has left the northern and middle portion of the reef system in a “highly degraded state,” the report said.

The Great Barrier Reef is the largest living structure on the planet — so large, in fact, that it is the only living thing on earth visible from space. It stretches over 2,300 kilometers (1,400 miles) and is home to more than 1,500 species of tropical fish, plus dolphins, whales, birds, and even giant, century-old clams. Pre-pandemic, it contributed 6.4 billion Australian dollars (US$4.6 billion) to the economy every year, largely thanks to tourism, and typically supports around 64,000 jobs.

That bleaching will continue along the reef is a virtual certainty, according to the IPCC. Perhaps even more ominously, the report suggests it may simply be too late to stop bleaching entirely. Even if the global community achieves its goal of limiting future warming to 1.5 degrees Celsius (2.7 degrees Fahrenheit) since pre-industrial times, that still wouldn’t be sufficient to prevent more frequent mass bleaching events, though it may reduce their occurrence, the IPCC found.

The report predicts that ocean warming and marine heatwaves will cause the loss and degradation of tropical shallow coral reefs, leading to “widespread destruction” of coral reef ecosystems. The report points to three previous mass bleaching events from 2016 to 2020 that caused significant coral loss, and warns that there has been “mass mortality” of some coral species.

For those who struggle to understand how devastating bleaching is, diver Tony Fontes likens it to a wildfire under the ocean. Fontes, who recently retired after 40 years as a diving instructor on the Great Barrier Reef, remembers diving on reefs that had recently been bleached and swimming through water that had turned milky-white from dead coral tissue. He would emerge covered in slime.

“You sit on the boat trying to wash it off and you just realize you’ve just swum across a reef that a couple weeks ago was full of life and vibrant and now a bushfire has gone through it and the coral is dead, and the rest of the marine life will just have to move on or die off,” he says. “It’s a really, really sad, heart-wrenching experience.”

Yet despite the looming threat in its own back yard, Australia has lagged behind other wealthy countries in its greenhouse gas emissions reduction performance and pledges. Last year, a climate think tank ranked Australia as the worst climate performer among comparable developed countries since nations pledged in the 2015 Paris climate agreement to limit global warming.

The issue is politically fraught in Australia, which is one of the world’s largest exporters of coal and liquified natural gas, and one of the highest greenhouse gas emitters per capita because of its heavy reliance on coal-fired power. Last month, the government pledged to spend another AU$1 billion over nine years improving the reef’s health, but critics argued that the money would do nothing to address rising ocean temperatures, the main threat to coral.

The consequences of inaction go beyond the ecological to the economical: If bleaching persists, the IPCC estimates 10,000 jobs and AU$1 billion in revenue would be lost every year from declines in tourism alone.

Around a billion people worldwide rely on coral reefs for their everyday living, says Scott Heron, a physics professor and reef science expert at James Cook University. Which is why, he says, a failure to urgently reduce greenhouse gas emissions could have devastating effects for humanity.

“It’s going to affect real people and real people’s lives,” Heron says. “It’s going to make a massive change to not just people in Australia, but people who subsist on reef services. And so we’re really putting this into a frame of endangering human life.”

Beyond the reef, the report warns that climate change will lead to a surge in heat-related deaths in Australia, the extinction of certain animal species, and more wildfires. Koalas are at risk of local extinctions due to increasing drought and rising temperatures, the IPCC said. And rising sea levels and storm surges led to the recent extinction of a rodent species called Bramble Cay melomys, which lived on a remote cay in the northern Great Barrier Reef, the report said.

The frequency and severity of dangerous wildfire conditions is already increasing, due in part to climate change, the IPCC said, citing the catastrophic “Black Summer” fires of late 2019 and early 2020 that killed at least 33 people and destroyed more than 3,000 homes. Even Australia’s famed eucalyptus trees, which are naturally resilient to the country’s seasonal fires, may not be able to withstand the ferocity and frequency of the predicted blazes, which could lead to the decimation of forests, the IPCC warned.

“We’re seeing conditions which really weren’t projected for some decades … and yet they’re appearing pretty much now, and so to some extent we could well be under-estimating the risks associated with things like fires,” says IPCC vice-chair Mark Howden, director of the Institute for Climate, Energy and Disaster Solutions at the Australian National University.

Still, despite the grim predictions, Howden urges Australians not to lose hope and to focus instead on solutions, primarily by reducing greenhouse gas emissions, but also by reducing other reef stressors such as over-fishing. The report also provides extensive lists of climate adaptation strategies, such as improving building standards so that homes stay cooler during potentially deadly heatwaves.

“Does this report identify whole areas Australians should be concerned about? Absolutely, and it would be hard to understate the comprehensiveness and significance of those impacts,” Howden says. “Does it also portray a whole series of things that we can take action on which take the sting out of the worst-case scenarios in the future? Absolutely.”