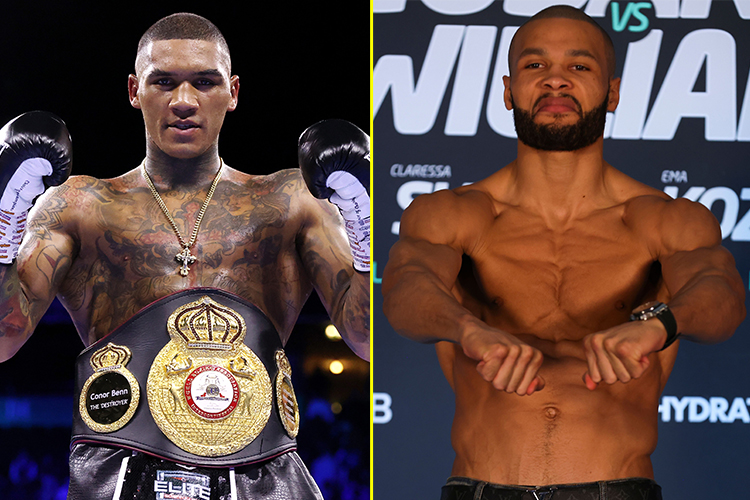 They are both the sons of boxing legends, but that is where the similarities stop between Conor Benn and Chris Eubank Jr.

The two have agreed to fight at a catchweight of 157lbs at the O2 Arena in October, it was confirmed this week.

The pair will reignite their family rivalry after their fathers, Chris Eubank Sr and Nigel Benn, captured the attention of the entire nation during the 1990s.

There were two fights between them, with the first going to Eubank and the second ending a draw.

“The last fight was a draw… we all know it weren’t a draw. It’s time I set the score straight,” Benn told talkSPORT.

Eubank Jr and Benn are at very different stages of their career, with the former approaching his 33rd birthday and seen title shots come and gone.

Benn is the younger fighter at 25 and is still working his way up to the top. He is likely to get his shot at a world title soon, so it came as a surprise to some that he is fighting someone who boxes out of his weight class.


Joshua vs Usyk 2 date: UK start time, location, undercard and how to follow


Tyson Fury flies to Iceland for face-to-face clash with Thor, but he’s not there


Inside McGregor’s life at sea with Hermes ashtrays, parties and serious gym work

“There are many reasons,” Benn said when asked about why he took the fight. “The world titles are tied up at the minute. I’m top five in every governing body.

“The likes of the people I want to fight: Thurman, Ugas, Jose Rameriez, Barry… we made offers to them and they are not interested.

“Maybe promotional, financial, whatever it is it was not the right decision for them.

“Eubank was among the names materialising and that progressed really quick. I didn’t want a tick over fight.

“I wanted a big one next. The Eubank fight came up and I believe it makes sense.

“It’s a legacy fight. It’s a massive fight and a fight that can happen now.”

The issue of weight has been the big topic of discussion before the fight was announced, with financial penalties for reportedly in the contract if either miss the target.

Benn continued: “Let’s make it clear though. Everyone is coming out with I’m trying to weight drain him. Him and his team suggested the weight.

“Be a man of your word and make the weight. He suggested the weight and we agreed, we were happy with the weight.

“If you knew what I was weighing now, how I look now and how I feel now, you’d be very surprised.

“It was a matter of him making the weight, so there was heavy fines attached that we wanted to weight to make sure he makes it.

“He had no intention of making the weight whatsoever.”

Despite fighting someone who usually boxes at super-middleweight, compared to Benn’s welterweight comfort zone, the 25-year-old is confident.

“I want people to say I beat him then, not after he’s come off the back of three losses and at the tail end of his career when people know he’s finished.

“He’s got the job done in these last couple of fights, but I am capable of beating Chris and whatever he brings to me.

“When you weigh it up, is he more explosive than me? No. I don’t think he’s a better boxer than me.

“He seems caught in between styles. Does he really want to fight any more or does he want to be out in Vegas playing poker? I don’t know.

“He’s fighting a young, hungry fighter who is really coming in and bringing the heat. The weight thing for me isn’t an issue.”

There was plenty of animosity between the two fathers and that is likely to continue to the sons.

Benn said: “The apple doesn’t fall far from the tree. I say that in the nicest way possible. He is a carbon copy of his dad.

“Whether I like it or not, I would say I’m a tamer version of my dad.

“We are legends’ sons. His approach to it has been completely different to my approach.

He added: “I’m not going to fake anything. We are complete opposites anyway. Off camera we were standing there in Brighton, I went to see my pals.

“I just looked at him and said ‘what sort of response is that?’”