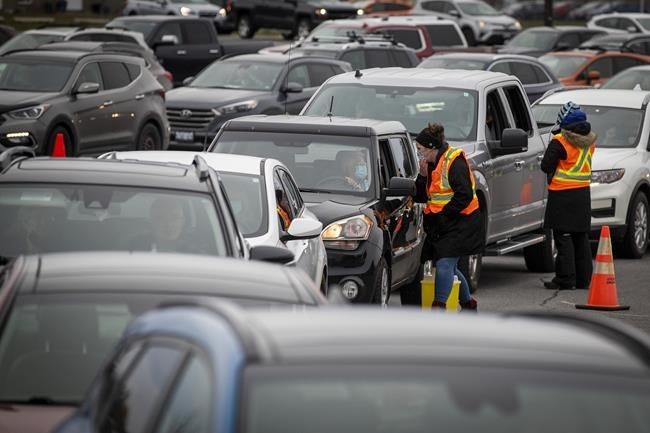 Large parts of Canada are starting to hunker down, with new restrictions coming into effect as a fifth wave of COVID-19 fuelled by the Omicron variant saw thousands of new cases across the country over the weekend.

Large parts of Canada are starting to hunker down, with new restrictions coming into effect as a fifth wave of COVID-19 fuelled by the Omicron variant saw thousands of new cases across the country over the weekend.

Quebec and Nova Scotia set new records for their daily case counts on Sunday while Ontario reported more than 4,100 additional infections, which was 800 more than the previous day.

Other parts of the country were also experiencing a surge in new cases unseen since before the summer as the Omicron variant, identified by the World Health Organization as a potential concern only last month, became increasingly entrenched in Canada.

And while hospitalizations have remained steady in Ontario and some other parts of the country, a recent spike in the number of severe cases in Quebec has added to concerns the rest of the country could soon follow.

In response to the growing wave, several provinces have started to re-impose public health restrictions only days before the start of the holiday season that in many cases apply to both the vaccinated and unvaccinated.

In Ontario, new limits on social gatherings and capacity limits in stores and restaurants came into effect Sunday as the provincial government struggled to get escalating case counts under control, while similar restrictions were set to come down in British Columbia and Quebec on Monday.

Quebec reported 3,846 new cases on Sunday, setting an all-time high for the province’s daily tally for the second time in three days, while the number of hospitalizations and people in intensive care because of COVID-19 continued to increase.

Dr. Adalsteinn Brown, head of the Ontario COVID-19 Science Table, had warned Thursday that while hospitalizations in his province had remained fairly steady, he expected a spike in two to three weeks.

“It does cause serious disease,” Brown said in discussing the science table’s latest modelling. “Hospital rates have risen in South Africa where it first took hold. It’s not just a case of the sniffles.”

A Quebec government health-care research institute also said Thursday that it expects more than 700 non-ICU hospitalizations in the province, and more than 160 people in intensive care, within two to three weeks.

However, the institute said it was less confident than usual in its projections because its data on the Omicron variant was based on a single study conducted in South Africa, which has a significantly lower vaccination rate than Quebec.

Newfoundland and Labrador’s chief medical officer of health, Dr. Janice Fitzgerald, said there were 127 active reported cases of COVID-19 in the province, though nobody is in hospital due to the virus.

Education Minister Tom Osborne nonetheless said schools would close for the holiday break beginning Tuesday rather than Thursday and students are to prepare for possible online learning when classes resume on Jan. 4.

The onset of a fifth wave of COVID-19 has sparked a rush for booster shots as the Omicron variant has caused a surge of infections among both vaccinated and unvaccinated Canadians.

Ontario’s science advisers have said two doses of COVID-19 vaccine are only 35 per cent effective against the variant three months after being administered, while a third dose bumps efficacy up to 75 per cent.

The province on Monday will open booster eligibility to all residents aged 18 or over who received their second dose at least three months ago. Other provinces are also expanding their booster campaigns to protect against Omicron.

This report by The Canadian Press was first published Dec. 19, 2021.