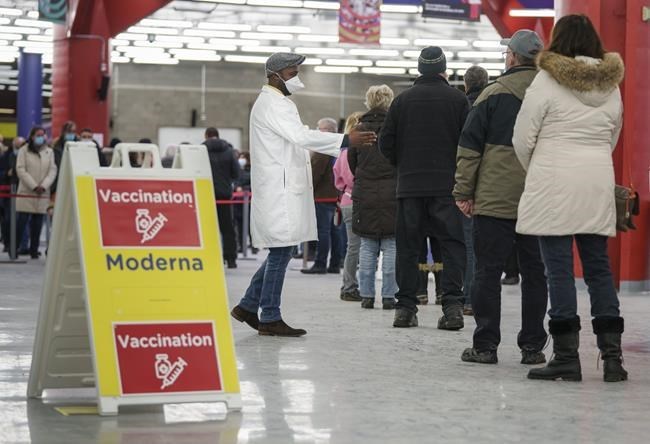 In The News is a roundup of stories from The Canadian Press designed to kickstart your day. Here is what’s on the radar of our editors for the morning of Jan. 11 … What we are watching in Canada …

In The News is a roundup of stories from The Canadian Press designed to kickstart your day. Here is what’s on the radar of our editors for the morning of Jan. 11 …

Justin Trudeau says Ottawa will do all it can to help provinces and territories cope with the fifth wave of the COVID-19 pandemic, as infections fuelled by the Omicron variant threaten to overwhelm health systems.

The prime minister spoke with provincial and territorial leaders yesterday, and a statement issued by his office says he assured them that there are enough vaccine doses available for all eligible Canadians to receive third booster shots.

The federal government has said provinces and territories will receive a combined 140 million rapid tests this month, although the statement did not provide any new details on when the deliveries will be scheduled.

The statement says Trudeau also emphasized the need to promote support programs, such as the federal wage subsidy, to help people and businesses survive the latest lockdowns and public health restrictions.

The call with the First Ministers came as COVID-19 case numbers and hospitalizations continue to surge throughout Canada.

Quebec reported an all-time high of 2,554 patients, 248 of whom are in intensive care, while Ontario confirmed 2,467 hospitalizations and 438 patients in the ICU.

The provinces also recorded a combined total of 20,279 new COVID cases, although the true number is likely much higher due to a lack of access to testing.

The rampant spread of the Omicron variant has stoked alarm south of the border, where the U.S. Centers for Disease Control and Prevention issued a fresh Level 4 “avoid travel” advisory for Canada, citing a “very high” level of COVID-19 in the country. It urged anyone who must go to be fully vaccinated.

That quickly prompted the State Department to revise its travel advisory, which had been at Level 3, “reconsider travel,” to upgrade its advice to Level 4: “Do not travel to Canada due to COVID-19.”

A new poll suggests a slim majority of Canadians support the latest round of lockdowns and other government-imposed restrictions as the Omicron variant fuels an explosion of new COVID-19 infections.

Fifty-six per cent of respondents in the poll conducted by Leger and the Association of Canadian Studies agreed governments are making the right decisions to limit the spread of Omicron and keep the health system from being overrun.

Another 31 per cent said they did not believe Omicron poses a serious health risk to most of those who are infected, and that governments should leave things open and let Canadians live with the risk.

The remaining 14 per cent said they did not know.

The results suggest there is a growing level of fatigue among Canadians when it comes to lockdowns, including among those who have been fully vaccinated, said Leger executive vice-president Christian Bourque.

“The actual support for vaccination is very high, the perceived efficacy is very high,” Bourque said. “Even among the vaccinated, they’re saying: ‘You know what? I’m vaccinated, I’ve done all I could. Let’s just live with it.’”

Several provinces say the Omicron-fuelled wave is threatening to overwhelm their health-care systems, with hospitalizations nearing or reaching record highs in Quebec, Ontario, and New Brunswick.

Hospitals around the U.S. are increasingly taking the extraordinary step of allowing nurses and other workers infected with the coronavirus to stay on the job if they have mild symptoms or none at all.

The move is a reaction to the severe hospital staffing shortages and crushing caseloads that the Omicron variant is causing.

California health authorities say hospital staff members who test positive but are symptom-free can continue working. Some hospitals in Rhode Island and Arizona likewise told employees they can stay on the job if they have no symptoms or just mild ones.

The highly contagious Omicron variant has sent new cases of COVID-19 exploding to over 700,000 a day in the U.S. on average, obliterating the record set a year ago. The number of Americans in the hospital with the virus is running at about 108,000, just short of the peak of 124,000 last January.

Many hospitals are not only swamped with cases but severely shorthanded because of so many employees out with COVID-19.

At the same time, Omicron appears to be causing milder illness than the Delta variant.

Last month, the Centers for Disease Control and Prevention said that health care workers who have no symptoms can return to work after seven days with a negative test, but that the isolation time can be cut further if there are staffing shortages. France last week announced it is allowing health-care workers with mild or no symptoms to keep treating patients rather than isolate.

MOSCOW _ The president of Kazakhstan announced Tuesday that a Russia-led security alliance will start pulling out its troops from the country in two days after completing its mission.

The mostly Russian troops were deployed to Kazakhstan last week by the Collective Security Treaty Organization, a military alliance of six former Soviet states, at the president’s request amid the worst public unrest the former Soviet nation has faced since gaining independence 30 years ago.

Protests over soaring fuel prices erupted in the oil and gas-rich Central Asian nation of 19 million on Jan. 2 and quickly spread across the country, with political slogans reflecting wider discontent over the authoritarian government. Over the next few days, the demonstrations turned extremely violent, with dozens of

In Almaty, Kazakhstan’s former capital and largest city, protesters set government buildings on fire and briefly seized the airport. By the weekend, the unrest has been largely quelled.

President Kassym-Jomart Tokayev has blamed the unrest on foreign-backed “terrorists” and insisted that his request for help to the CSTO was justified.

“When this decision was being made, we could have completely lost control over Almaty, which was being torn apart by terrorists. Had we lost Almaty, we would have lost the capital and the entire country,” Tokayev told Kazakhstan’s parliament Tuesday.

The president said that the CSTO has largely completed its mission in the country and will start withdrawing its troops in two days _ a process that will take no longer than 10 days.

Kazakhstan’s Interior Ministry on Tuesday reported that a total of 9,900 people were detained in the country over the unrest.

A tentative deal was announced in the 103-day-old NHL players’ lockout. Players ratified the contract two days later, after which commissioner Gary Bettman announced a 48-game season would start on Jan. 20.

NEW YORK — Isla Fisher’s character in the new genre-bending series “Wolf Like Me” is a romantic catch. Kind of.

She speaks four languages, makes cheese and pottery and is good at close-up magic. On the other hand, she can be distant and absolutely beastly. Oh, that reminds us: She has a pretty big personal secret.

That’s the setup to the new ambitious Peacock six-part series that starts Jan. 13 and mixes slapstick comedy, adult drama and heartbreaking trauma. Audiences are in for quite a ride right from the beginning, signalled by the series being set in the unexpected Australian suburbs and with the casting of Josh Gad and Fisher.

“Love is scary,” says Gad. “I think that however you slice it, we all have secrets. We all have baggage. And you don’t know what you’re getting until you’re in it. And then once you’re in it, it’s too late.”

“Wolf Like Me” was created, written and directed by Abe Forsythe, who previously wrote and directed the sci-fi horror comedy movie “Little Monsters,” starring Lupita Nyong’o and Gad. Like that film, “Wolf Like Me” mixes genres — this time romantic comedy and horror — to push into the absurd and come back with something sweet and dramatic.

“I was drawn to telling a timeless story in such a unique way,” says Gad. “Abe is such a brilliant caretaker when it comes to challenging his artists to tackle different tones and different genres and do that juggling act that feels so foreign and strange and impossible.”

Gad is mostly known as the cuddly snowman in “Frozen,” while Fisher famously played a comically unhinged love interest in “Wedding Crashers.”

“Casting Josh and Isla was a big step in ultimately articulating one of the main themes of this show, which is don’t judge a book by its cover,” says Forsythe. “This is not the usual way that I’ve seen them, which is what I’m asking the audience to do with the characters.”

In a medical first, doctors transplanted a pig heart into a patient in a last-ditch effort to save his life and a Maryland hospital said Monday that he’s doing well three days after the highly experimental surgery.

While it’s too soon to know if the operation really will work, it marks a step in the decades-long quest to one day use animal organs for life-saving transplants. Doctors at the University of Maryland Medical Center say the transplant showed that a heart from a genetically modified animal can function in the human body without immediate rejection.

The patient, David Bennett, a 57-year-old Maryland handyman, knew there was no guarantee the experiment would work but he was dying, ineligible for a human heart transplant and had no other option.

“It was either die or do this transplant. I want to live. I know it’s a shot in the dark, but it’s my last choice,” Bennett said a day before the surgery, according to a statement provided by the University of Maryland School of Medicine.

On Monday, Bennett was breathing on his own while still connected to a heart-lung machine to help his new heart. The next few weeks will be critical as Bennett recovers from the surgery and doctors carefully monitor how his heart is faring.

There’s a huge shortage of human organs donated for transplant, driving scientists to try to figure out how to use animal organs instead. Last year, there were just over 3,800 heart transplants in the U.S., a record number, according to the United Network for Organ Sharing, which oversees the nation’s transplant system.

Prior attempts at such transplants _ or xenotransplantation _ have failed, largely because patients’ bodies rapidly rejected the animal organ. Notably, in 1984, Baby Fae, a dying infant, lived 21 days with a baboon heart.

The difference this time: The Maryland surgeons used a heart from a pig that had undergone gene-editing to remove a sugar in its cells that’s responsible for that hyper-fast organ rejection. Several biotech companies are developing pig organs for human transplant; the one used for Friday’s operation came from Revivicor, a subsidiary of United Therapeutics.

This report by The Canadian Press was first published Jan. 11, 2022