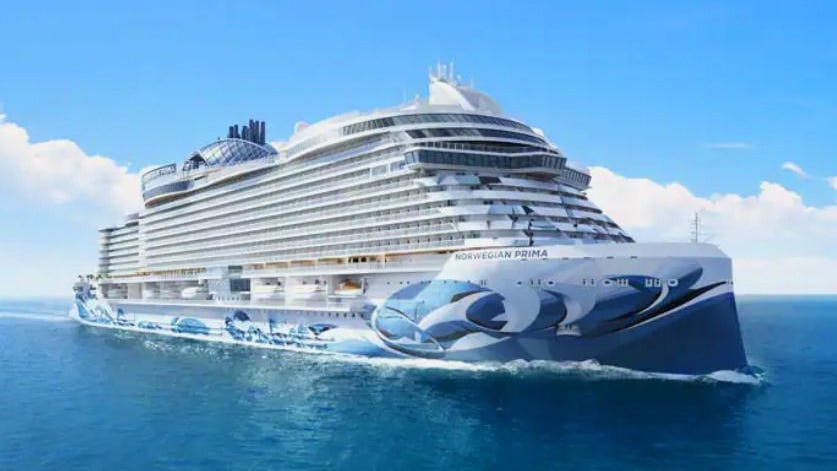 As the industry rebounds following the devastating economic effects of the Covid-19 pandemic, cruise companies are kickstarting the season with lots of news and developments. It’s not just hotel companies looking to make a splash with customers this spring. From new godmothers to themed sailings and a host of new ships making their 2022 debut, these are some of the highlights that will have cruise fans excited to take to the world’s oceans and rivers again, especially as spring break travel begins.

Scheduled to debut later this year, the Norwegian Prima will have a familiar face framed on board. Pop star and American Idol judge Katy Perry will christen the ship as its new godmother later this year, which continues Norwegian’s tradition to use music icons as godmothers. Starting its itineraries in Europe, the ship will move to the Caribbean later this year. Perry says she is a fan of taking cruises herself. To celebrate the occasion, Norwegian created a special Spotify playlist including some of her hit songs. Highlights for the new Norwegian Prima, the first in a new class of ships for the line, will include a duplex theater with seats that fold down to create space for a massive nightclub and several new dining concepts with rotating menus.

Emerald Cruises launched its first ocean yacht in Aqaba, Jordan this month with plans to sail on a Red Sea itinerary visiting destinations like Sharm-el-Sheikh, Egypt; Eilat, Israel; and Petra, Jordan. The ship carries only 100 passengers and will be officially christened in Venice later this year before beginning Mediterranean sailings later this year. The ship will offer numerous activities for the active lifestyle including electric bikes, a marina platform with water sport equipment, an infinity pool, infrared sauna and a host of shore excursions.

Silversea Cruises christened the 100-passenger Silver Origin recently during an expedition-inspired ceremony in San Cristobal, the Galapagos Islands. Following the traditional bagpipe ceremony, Johanna Carrión, a conservationist and resident of the Galapagos Islands herself, raised her Champagne glass on one of the Zodiac boats as the godmother of the ship. As part of the cruise line’s sustainability efforts (including single-use plastic reduction and using reef-safe sunscreen onboard), the company has started the Silversea Fund for the Galapagos supporting long-term educational projects. The ship will sail around the Ecuadorian archipelago throughout the year.

At the Fincantieri shipyard in Genoa, Italy, Oceania Cruises floated out its new 67,000-ton, 1,200-guest Vista at the end of February. The ship will have a dozen dining outlets including four that are new to the cruise company, which is known for its expansive culinary options. With 800 staff, it will also have two crew for every three passengers. Another new development is the addition of Concierge Level Veranda Staterooms for solo travelers to meet the needs of a growing segment of cruisers.

Wine fans can mix and mingle with well-known wine makers and experts in the industry as part of Norwegian’s sixth annual “Meet The Winemakers” series, which returns this spring. Wine tastings, wine-paired dinners, seminars and culinary demonstrations bring the wines and their various features to life for interested guests. The onboard events range in cost from $22 to $100. Guests can sail with some of the top wine producers including Antonio Hidalgo, Gérard Bertrand, Salvatore Ferragamo and Domaines Barons de Rothschild (LAFITE) among others. The series is already available on Norwegian Encore, Norwegian Escape, Norwegian Joy and Norwegian Bliss sailings this spring, but will take place in Europe on select Greek island sailings on Norwegian Escape later this year.

Azamara has chosen the founder and CEO of women’s travel community Wanderful, Beth Santos, as the new godmother of its Azamara Onward ship, which will debut this spring. The announcement earlier this month was made on International Women’s Day. Santos’ travel group helps more than 45,000 women travel the world and enjoy local events and immersive experiences at dozens of destinations. Santos will officially christen the ship on May 2 in Monte Carlo.

On two of Lindblad’s newest polar vessels, the National Geographic Endurance and National Geographic Resolution, the company has introduced two first-of-its-kind igloos on the deck where guests can slumber with epic views. Each of these glass-domed igloos has a teak wood day bed with fur throw, and they are open to everyone during the day. Each evening, guests can reserve them to overnight in view of the stars and passing icebergs or scenery. Hot water bottles, robes and fleece-lined capes add to the experience. Special LED lights that recreate the feeling of the Northern Lights for a little extra romance. The igloos were originally built as solar units for the deck’s whirlpools. The company founder Sven Lindblad’s interest in Inuit architecture inspired the repurposing of them for something that guests could use.

In an effort to support and highlight budding young musicians, Sea Cloud Cruises is introducing several sailings with notable, onboard talent as part of its themed cruises. These include sailings with German pianist and conductor Justus Frantz in April and a “Steinway voyage” with special events including an evening at the Danish Broadcasting Corporation’s new concert hall in Copenhagen with the Trio con Brio Copenhagen. Other themed cruises include a wine sailing in April and a culinary sailing later that month with Germany’s youngest two Michelin-star chef.

Exceptional dining, eclectic shopping and sensational Bosphorus waterfront views are not all that is new at Galataport, Istanbul’s new city-center cruise hub and Europe’s second largest LEED Platinum-certified project. Coming soon is a new Peninsula hotel, expected to open later this year, and the Istanbul Modern, a contemporary art museum designed (and rebuilt) by Renzo Piano. The D.Ream group of restaurants, well-known in the city for famous outposts like Roka and Liman, has several restaurants in the district. Close to all of Istanbul’s tourist attractions, the summer cruise season will see numerous ships arriving to the port including the return of Seabourn, which will have numerous ship visits to this new underground cruise terminal after a short hiatus.

Viking Octantis to be christened in New York

This April, Viking will officially welcome its second expedition ship at a christening ceremony in New York. Viking Octantis will join Viking Polaris, currently sailing on Antarctic itineraries, as part of the cruise company’s growing fleet of 80 river ships, six ocean ships and now two expedition ships. The ship will accommodate as many as 378 guests and begin sailing a Great Lakes routing this summer making stops in cities like Cleveland, Milwaukee and Toronto before heading south to the Caribbean, South America and eventually Antarctica.