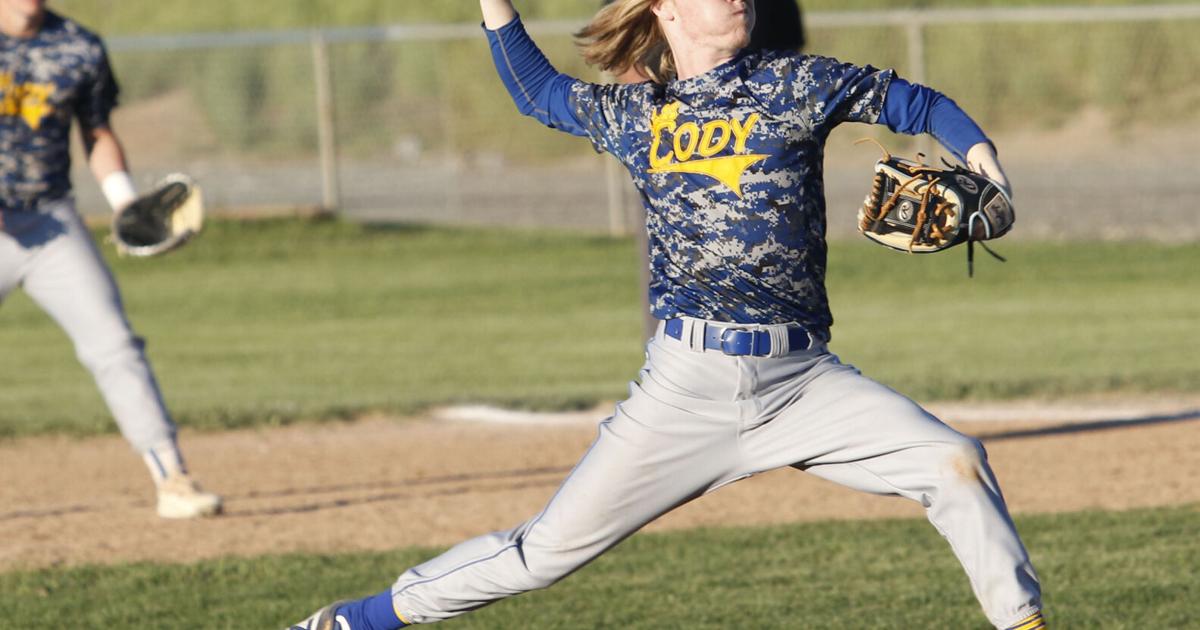 After falling big in pair of matchups against AA Sheridan in Cody on Wednesday night, the Cody Cubs put a scare into the Troopers in a double header on the road on Saturday.

Sheridan beat Cody 14-0, 16-5 at Milward Simpson Field last week, and then squeaked by the Cubs 3-1 in game one on Saturday before running away 17-8 in game two.

“That pitcher we faced in game one at home was tough,” Cubs player Ben Reinker said. “He’s pitched a perfect game before and their bats were super hot.”

The Troopers jumped out to a 7-0 lead in the first inning in game one on Wednesday in Cody (15-11) and the Cubs tallied just three walks in five innings against the lefty from Sheridan.

In game two the Cubs answered a grand slam by Sheridan’s Trevor Stowe in the first inning with three runs of their own, but couldn’t quite cut into the lead enough to come back against the Troopers in the 16-5 loss.

Trey Schroeder had a pair of hits for the Cubs, and Ty Peterson finished with a pair of RBIs.

“Our bats weren’t quite as on at home as they were this weekend,” Peterson said. “I just don’t think we came out as ready to compete as we did on Saturday.”

Not only did the Cubs compete at Sheridan on Saturday, they nearly stole game one against the hottest AA team in the state.

Jack Schroeder got the nod on the mound against the Troopers in game one and pitched another gem after coming off a dominating performance in his last start against Billings.

After a Trey Thomasson single in the first inning, a Jack Schroeder double got both of them in scoring position.

A Dominic Phillips grounder scored Thomasson and the Cubs went up 1-0, a lead they held onto until the bottom of the fourth.

“Sheridan is a great team,” coach Bart Grenz said. “They have a lot of older kids and they play extremely well. Whatever you do against them you have to earn it.”

Jack Schroeder retired the Troopers in order in the second inning, and the Cubs threatened in the third on a single from Eli Johnston and walks from Ben Reinker and Phillips, but Cody couldn’t add to the lead.

“We just kind of came out with a lot more energy in Sheridan on Saturday after seeing them in those first two games,” Reinker said. “We had the momentum in most of game one for sure.”

In the fourth the Cubs again had a lot of traffic on the bases.

Jace Jarrett singled and Wyatt Carlson walked before Jayvin McAlmond laid down a sacrifice bunt to advance both runners, but again the Troopers managed to escape the inning without any damage on the scoreboard.

Sheridan finally got something going against Jack Schroeder in the bottom of the fourth to take the 3-1 lead.

“Sheridan is a really good hitting ball club,” Jack Schroeder said. “You have to keep them off balance as much as you can, so I tried to mix in a little more off-speed stuff than usual, but a lot of things were clicking for us in that game.”

“I was a little nervous, I’m not going to lie,” Peterson said. “I just tried to calm down and throw strikes. Once I was throwing strikes with my fastball I was just trying to mix things up.”

The plans for the mound seemed to work as the Troopers struggled against the Cubs pitchers.

“Ty is a kid that is ready,” Grenz said. “He is ready to take the ball at any moment. He finds the strike zone, he mixes things up, and he doesn’t give in.”

The Cubs had the opportunity to cut into the lead in the fifth with the bases loaded and one out, but the Troopers showed why they are one of the favorites to win the AA state title this year with just enough defense to keep the Cubs from scoring.

“Being able to hang with an upper level team shows what we can do when we get back to playing with single A teams,” Reinker said. “I thought we had them in game two, but they had to throw in one of their best pitchers to try to shut us down.”

The Cubs exploded in the second inning of game two with eight runs.

Trey Schroeder went 3 for 4 with a pair of RBIs and a run scored.

Sheridan came back in the bottom of the fifth to take the lead 13-8 and pulled away from there.

Baseball fans are in for an outstanding week of action in Cody this week.

The Cubs host the World Team on Monday, Tuesday and Wednesday, with the Lions Wood Bat tournament slated for this weekend.

“This is going to be a great week of baseball,” Grenz said. “There will be a lot of quality teams and a lot of great baseball on the field.”