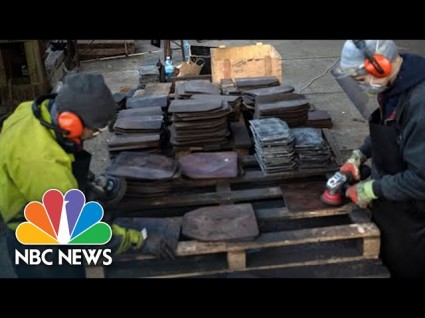 Trump bootlick, former NYPD officer and ex-Newsmax shill John Cardillo is prominent enough in MAGAt land to recently dine at the Florida governor’s mansion with Ron DeSantis. He has an interesting side hustle. Via the Daily Beast:

But Cardillo has a little-known second job as an arms dealer operating in the former Eastern bloc, selling ammunition and body armor under the name M42 Tactical from his Fort Lauderdale home. According to a recently filed lawsuit, he doesn’t always deliver and now stands accused of stiffing Ukraine’s embattled government on a delivery of almost $200,000 in body armor.

In court papers, the company describes itself as an importer and wholesaler of “rifle and handgun ammunition.” On its website, the company touts its access to Serbian and Russian-made small arms ammunition.

For Florida resident Michael Bogachek, those credentials made M42 Tactical a natural fit for a contract in the weeks after Russia invaded Ukraine. The Ukrainian-born Bogachek was shocked by tales of Russian atrocities committed during the first days of the war, and wanted to support his homeland. According to Bogachek, Cardillo said he could obtain body armor from Serbia and send it to Ukraine.

You’ll never guess what happened next! Okay, you probably will:

By late May, though, the body armor still had not reached Ukraine, according to court papers filed by Bogachek. On May 27, Bogachek sued Cardillo and his company in Florida.The suit alleged that the conservative pundit had made off with his nearly $200,000 payment, leaving Ukrainian police officers without the protection he purchased for them.

Cardillo claimed in a court filing that he couldn’t fulfill the order because Bogachek couldn’t provide an end-user certificate, a legal document often required in the arms trade to ensure that weapons or armor will go to their intended destination.

Bogachek’s lawyer, José M. Ferrer, disputed that defense, pointing out that the invoice doesn’t mention an “end-user certificate.” The invoice states that “end to end logistics” were already included in the order price, which Ferrer argues means includes the price of any end-user certificate.

So now they’re fighting it out in court. Turns out Cardillo has a history of running out on his debts, including stiffing his own lawyer. No wonder he loves Trump!