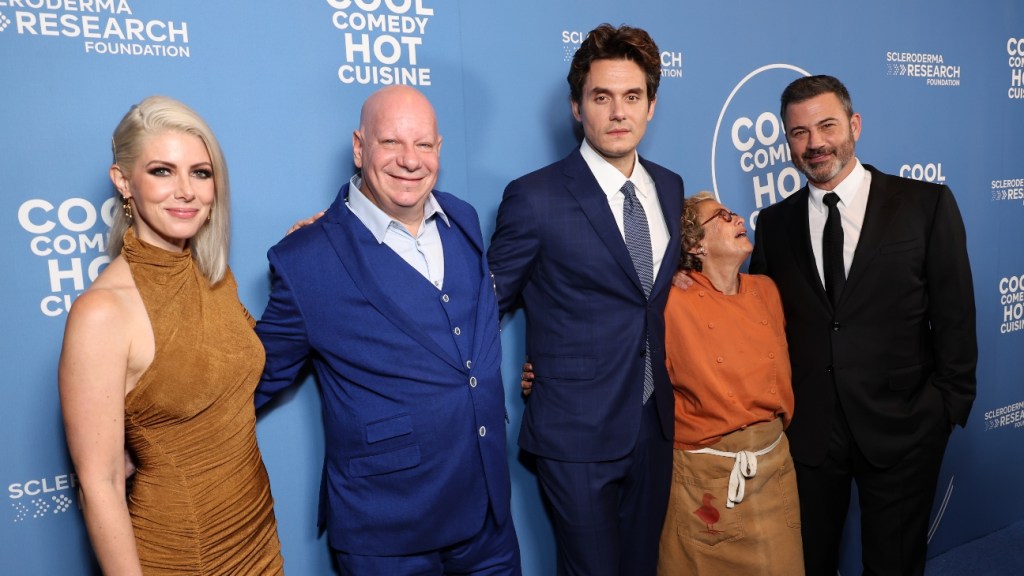 Bob Saget’s longtime friends John Mayer, Jeff Ross, Jimmy Kimmel and Dave Chappelle came together to honor the late comedian on Wednesday, in support of a cause he had been a part for 30 years.

Mayer, Ross and Kimmel hosted the Scleroderma Research Foundation’s annual fundraising event “Cool Comedy, Hot Cuisine” in Beverly Hills, which also served as a night of tribute to Saget, who died in January at age 65 after an accidental blow to the head.

The Full House actor had passionately championed the Scleroderma Research Foundation since losing his sister Gay to the disease — a rare and often life-threatening autoimmune condition that can cause fibrosis in the skin and other vital organs — in 1994. Saget joined the Scleroderma Research Foundation board of directors in 2003, but he began his involvement in 1991 through “Cool Comedy, Hot Cuisine” —as an attendee, a performer and eventually as a key figure in organizing and producing the event.

This year, in his place, Kimmel kicked off the night of sentimentality and dark humor, teasing that “these bookings have really improved vastly since Bob passed away,” with Bill Burr, Rosie O’Donnell and Kathy Griffin among the stand-ups on hand. Kimmel brought Ross and Mayer out to follow him; Mayer noted how “this is the first time I’ve come to a Scleroderma benefit where Bob hasn’t, as Jimmy said, asked me to do this event but then profusely apologized while asking me to do this event.”

He continued, “What’s so fun about tonight, the only thing that’s fun about it, is we get to show Bob we wanted to do this, we always wanted to do this.” Added Ross, “I’m going to try to keep this as festive as possible. Everyone should have a friend like Bob Saget; tonight’s a tribute but it’s also a celebration that we all got to know that guy, that he got to have this influence on our lives. You didn’t really know Bob until you saw him host a Scleroderma Research dinner — that was the true Bob Saget. He was emotional, he was the most sincere I’ve ever seen him on stage other than when he was acting on Broadway or something.”

Feniger took care of the “Hot Cuisine” part of the evening, which transitioned into an auction that raised over $1 million for the foundation (and included two of Mayer’s personal guitars). Stamos took the stage to introduce a tribute video for Saget, after a series of jokes telling the crowd, “I’ve spoken so much about him, written so much about him, and I just love him so dearly I would give anything to have him back.”

A common theme throughout the event was also Saget’s filthy sense of humor, with McHale declaring “Bob was the most empathetic and dirtiest person on the planet… There was no successful dirty person who was more beloved,” and shared some of the R-rated texts that Saget had sent him throughout the years.

For the comedy portion of the night, Nealon and Mandel performed brief sets before a special guest appearance by Chappelle, another longtime friend of Saget’s. Chappelle — who took the stage after all the audience’s phones had been locked away — admitted, “Tonight I got drunk because I love Bob so much. Bob, I can feel you in this room tonight.”

After going through his current stand-up material — which included documenting his on-stage attack at the Hollywood Bowl in May — Chappelle convinced Burr to join him on stage as the two riffed on each other’s jokes. Chappelle had a drink on stage in honor of Saget and played a video message for the crowd that he had sent Chappelle just months before his death, where Saget expressed his love and appreciation for his friend.

“What a fantastic human being,” Chappelle said, also noting how Saget had mentioned the Scleroderma benefit to him throughout the years and when Chappelle finally came one year, Saget cried. The comedian said he would now continue to do Saget favors forever, and though he had joked throughout his set about how he felt he was bombing, noted it was an honor to be there.

Mayer closed out the night with an emotional and story-laden performance, commenting how nine months after Saget’s death it’s still impossible for him to understand the star is actually gone, since his memories of him are so clear. Mayer revealed that he was playing the guitar that Saget had played during his last show in Florida — Rizzo had tracked it down and bought it, then gifted it to Mayer in what he said was one of his most prized possessions. He then played, as he said, “Bob’s favorite songs.”