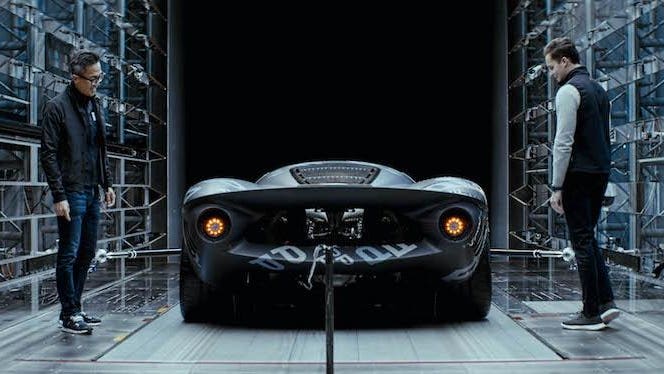 De Tomaso Automobili will work with the digital artist Ash Thorp on a new initiative. The niche Italian car company is engaging the multidisciplinary creator in the role of digital artist and designer for “The Paradigm Thread” — a project that fuses the digital and physical worlds. His work will involve helping design future De Tomaso cars, but also create other digital initiatives, brand experiences and artworks.

“The digital spectrum provides endless opportunities as our realities become redefined,” explains De Tomaso CEO and CMO Ryan Berris. He says the company is keen to align more and more with creatives from outside the traditional automotive scene so as to “push the limits of what is possible and retain an open-minded approach to new ideas and processes.”

The new venture chimes with De Tomaso’s eventful life. This is a company known for its brave and bold limited-edition sports cars to include the 1969 Mangusta, which featured in Quintin Tarantino’s 2004 Kill Bill: Vol 2.

As a business De Tomaso Automobili, though, has had its fair share of busts and buyouts. Founded in 1959 in the capital of Italian supercars Modena by the Argentinian Alejandro de Tomaso, for a period between the 1970s and 90s, the company had ownership of the Italian sports car and motorcycle brands Maserati and Moto Guzzi, before going into liquidation in 2004. De Tomaso was later purchased by a former Fiat executive, Gian Mario Rossignolo, whose adventurous business plan failed miserably leading to another bankruptcy. Then in 2015, the Hong-Kong based Ideal Team Ventures, who also own Apollo Automobil, successfully purchased De Tomaso.

The new owners, led by chair Norman Choi and chief executive Berris, have revived the brand with cars like the P72. Created in 2019 to coincide with the marque’s 60th anniversary, the hypercar pays homage to classic 60s racers and De Tomaso’s catalogue.

“De Tomaso has a deep history of working with, cultivating and nurturing some of the greatest designers in automotive history: Giorgetto Giugiaro, Tom Tjaarda, Peter Brock, Marcello Gandini, Jowyn Wong, amongst others,” says Choi. He explains of the new digital venture with the artist Thorp, “this is merely the start of our mission to further carry our distinguished design legacy by creating opportunity, cultivating talent and providing a platform for the next generation of digital artists.”

Thorp has worked on major motion pictures, commercial campaigns and concept products. He gained notoriety early in his career for his conceptual designs for Blade Runner, Ender’s Game, Total Recall and Ghost in the Shell. Most recently, he worked on the design for the Batmobile on the latest Batman movie.

“I have always been in love with the art and science that encompasses the vast world of automotive,” he says. “So, to align with De Tomaso is incredibly surreal for me. This project honors the astounding history of the brand and its evocative influence on how we approach the future.”

At De Tomaso, Thorpe will work alongside the internal team to help in the creation of new cars. Collaborating with him, says the company CEO Berris, will help “push the bounds of what is truly possible so that we, as a team, can continue to innovate and remain as open-minded as possible.”

Thorp’s work seeks to redefine the limits of digital artwork and blur the lines between illusion and reality. “He is a visionary and possesses that innate ability to create breathtaking art in the digital realm,” says Berris. “In life, only certain skills can be learned in a classroom or in the real world for that matter. What is most powerful is the intangible, the innate ability to create visionary forms that may initially cause cognitive dissonance, but prove to become timeless art.”

He sees the collaboration as mutually beneficial. “A beautiful dynamic will unfold as the De Tomaso platform provides visibility for Ash’s talents, whilst at the same time providing expert guidance and training from our team as we embark onto a new frontier.” I ask the CEO his thoughts on the connections between the the physical and digital worlds. “The convergence of physical and digital realms is upon us as our definition of reality will become forever redefined,” he replies, saying his company plans to be part of this conversation.

Talking more broadly, he says it’s fair to say the digital space will expand even more. “This will lead to further behavioral shifts with both the consumer and brand supporters — something we are mindful of and preparing in a measured manner for when we embark on any initiative.”

See others in the auto industry with unique perspectives: Chris Bangle, Marcello Gandini and Lunaz.