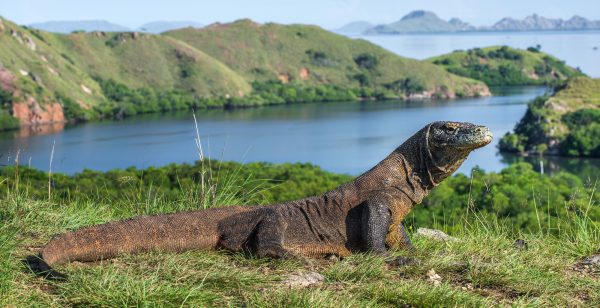 On a dirt path, forked yellow tongue darting from its mouth, a member of world’s largest lizard species lazes on an island in eastern Indonesia’s Komodo National Park as tourists snap photos. And about 18 miles (30 kilometers) away on another park island that harbors Komodo dragons, trees have been removed and concrete poured for new tourist facilities that have aroused the ire of residents and environmental activists.

The construction is part of an ambitious Indonesian initiative that has generated tensions between a government that wants to develop natural attractions for luxury tourism and conservationists who fear habitat for the endangered Komodo dragon will be irreparably harmed. United Nations officials have also voiced concerns about potential tourism impacts on this unique wildlife-rich park.

Encompassing about 850 square miles (2,200 square kilometers) of land and marine area, Komodo National Park was established in 1980 to help protect the famed dragons. Indonesia’s Ministry of Environment and Forestry estimates around 3,000 of the reptiles live there today, along with dugongs, sea turtles, whales and more than a thousand species of tropical fish.

Because of its biodiversity and beauty, the park became a United Nations Educational, Scientific and Cultural Organization World Heritage Site in 1991. And it’s one of Indonesia’s crown jewels for tourism, typically drawing hundreds of thousands of visitors from around the world each year.

For years the government has been trying to figure out how to best capitalize on the park, most recently designating it part of the country’s “10 New Balis” initiative — an effort to draw more tourists, as the island of Bali did before border restrictions during the COVID-19 pandemic.

“We are embarking into a new era of tourism in Indonesia based on nature and culture, focusing on sustainability and quality tourism,” Indonesian Minister of Tourism and Creative Economy Sandiaga Uno told The Associated Press.

Part of that multimillion dollar tourism development is a project on Rinca Island, where more than one-third of the park’s dragons are estimated to live on generally hot and dry terrain. The construction includes an expanded ranger station, viewing platform, boat dock, toilets, and other infrastructure.

The project worries local environmental activists and residents within park boundaries who say their livelihoods as tour guides, boat drivers, and souvenir sellers depend on the draw of the area’s natural beauty.

“When we talk about the development in the conservation area, we have to think … whether this is a wisely considered economic effect for the local people — or the environmental effect,” said Gregorius Afioma, a member of the local non-governmental organization Sun Spirit for Justice and Peace.

“The situation now is like collective suicide. We think that this kind of business will eventually kill others’ businesses and even themselves because they destroyed the environment,” Afioma said, adding that local residents also fear they won’t get construction jobs for the luxury tourist destination the Indonesian government is promoting.

UNESCO — the United Nations body that designates World Heritage Site status — has also raised concerns about development in the park.

“The state party did not inform us, as required by the operational guidelines,” said Guy Debonnet, chief of the body’s natural heritage unit. “This is definitely a project of concern, because we feel that the impacts on the universal value (of the park) have not been properly evaluated.”

During a meeting in July, UNESCO expressed other concerns, such as the project’s reduction of the park’s wilderness zone to one-third the previous area, addition of tourism concessions within the property, lack of an adequate environmental impact assessment, and a target to dramatically increase visitors.

“Third-party information transmitted to the State Party indicates that a target of 500,000 annual visitors for the property has been proposed, which is more than double the pre-COVID-19 pandemic visitor numbers,” said a report from the meeting. “This raises the question of how this tourism model fits (Indonesia’s) vision of moving away from mass tourism to more sustainable approaches.”

At UNESCO’s request, the country submitted more information about the project. But after reviewing it, the U.N. agency requested in October 2020 that Indonesia not “proceed with any tourism infrastructure project that may affect the Outstanding Universal Value of the property prior to a review of the relevant environmental impact assessment” by the International Union for Conservation of Nature.

After multiple attempts to get permission from government authorities, The Associated Press was unable to gain access to the construction site, which has been closed to the public for months. But satellite imagery shows construction continued after UNESCO requested the project be paused. The government did not respond to an email last week seeking comment.

As of December 6, UNESCO still had not received the requested revised assessment, said Debonnet, the world heritage unit chief.

The Indonesian government also granted at least two business permits in Komodo National Park, including for projects on Rinca, Komodo, and Padar islands, according to an email to the AP from Shana Fatina, president director at the Labuan Bajo Flores Tourism Authority, which helps coordinate government tourism efforts.

Some experts fear tourism expansion in the park could lead to disturbance of Komodo dragon habitat.

The predatory lizards, which can reach a length of 10 feet (3 meters) and more than 300 pounds (135 kilograms), were recently moved from “vulnerable” to “endangered” status on the IUCN list of threatened species. The organization cited the impacts of climate change and deterioration of the dragons’ habitat — including human encroachment — as reasons for the change.

Unless carefully managed, tourism projects could “have a big impact, not just from the number of people disturbing the behavior of the dragons and disturbing their prey, but also how much freshwater is being siphoned off,” said Bryan Fry, an associate professor at the School of Biological Sciences at the University of Queensland in Australia. “That could dramatically impact the very delicate balance of these islands.”

The opening date for the new Rinca Island facilities has yet to be announced. UNESCO’s Debonnet said it is engaged in talks with Indonesian officials to arrange a monitoring mission to assess the impact of ongoing development on the park and review its state of conservation.

And while World Heritage sites are usually discussed by the UNESCO committee on two-year cycles, Komodo National Park will be discussed in 2022, said Debonnet. “That is kind of an indication that we see there is some urgency in this issue,” he said.