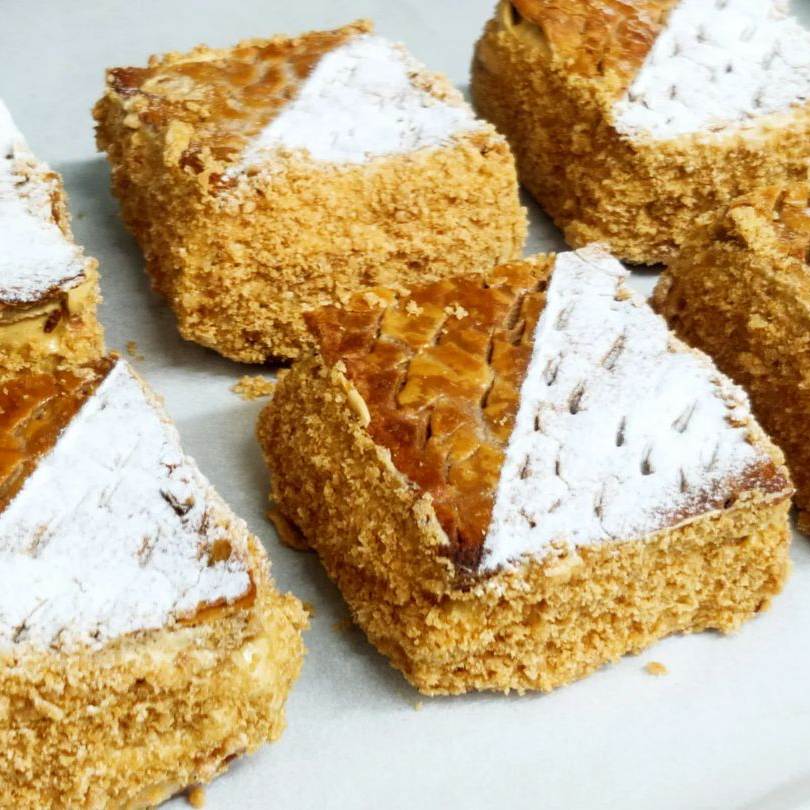 Especially in the case of Donut Vission’s Hazelnut Millefeuille.

First of all, this is more doughnut than it is flaky mille-feuille. Donut Vission, the doughnut-making sibling of Cookie Vission, says so. And before you question its angular form, it’s designed to be as such. As chef-owner of Donut Vission, Winnie Pang, who initially laughs with “Why not?”, explained, “People are more accepting [towards] a square doughnut than [they are] a circular millefeuille.”

To those with a less imaginative mind, think of this like a supersized beignet. But heftier and more robust. Crafted with a little more decadence and thought; sprinkled with a little more than a single coat of powdered sugar. It’s not just a fried-and-fluffy doughnut for a spot of afternoon treat, either. The Hazelnut Millefeuille has texture; character. A hazelnut praline and praline mousseline centre, a satisfying chew that only a yeast-based doughnut will know and a signature mille-feuille layer, sealed over the top, that lends a little extra surprise than usual.

“I always try to think outside the box with flavours, shapes — just concepts.” says Hong Kong-native, Le Cordon Bleu-trained Winnie, who also counts the Eggette Parfait, fresh-toasted egg waffle famously wedged into chilled gelato, from the now-shuttered Oddies Foodies within her impressive collection of inventions, “[At Donut Vission], we have tried to innovate with other combinations such as our Pookie (puff pastry cookie), Tiramisu Cookie Cup, and recently also started doing a Matcha Mochi Brioche Bun.”

For the square-shaped Hazelnut Millefeuille, it’s the ingenious combination of taste and texture that will completely renew any doughnut eating experience beyond sprinkles or a jammy centre. “Mille-feuille is as crunchy as you can get. Mix [it in] with a flurry fried bun, the texture contrast works well.” says Winnie. “They always have to be made fresh for the puff pastry to stay crunchy, otherwise you lose what makes it special.” Once carefully assembled — airy mille-feuille set over the pillow-soft base — they are dunked sideways into puff pastry crumbs for an extra coating of crunch.

I have yet to make my way to the quaint Tai Hang brick-and-mortar for a taste of my own, but I imagine it’s the sweet one-bite balance between crisp buttery layers and dough-y chew, softened by a delicious spot of chocolate cream. Don’t skip on the squared Hazelnut Millefeuille, though I imagine there’s no resisting a mille-feuille or a doughnut on its own — let alone a pastry that combines the two. Winnie reveals, “We are gonna explore more shapes, such as a heart shaped donut.” And while you stowaway a box of six Hazelnut Millefeuilles for the week, don’t forget Valentine’s Day is all but two weeks away. Those heart-shapes ones will make for a sweet treat.