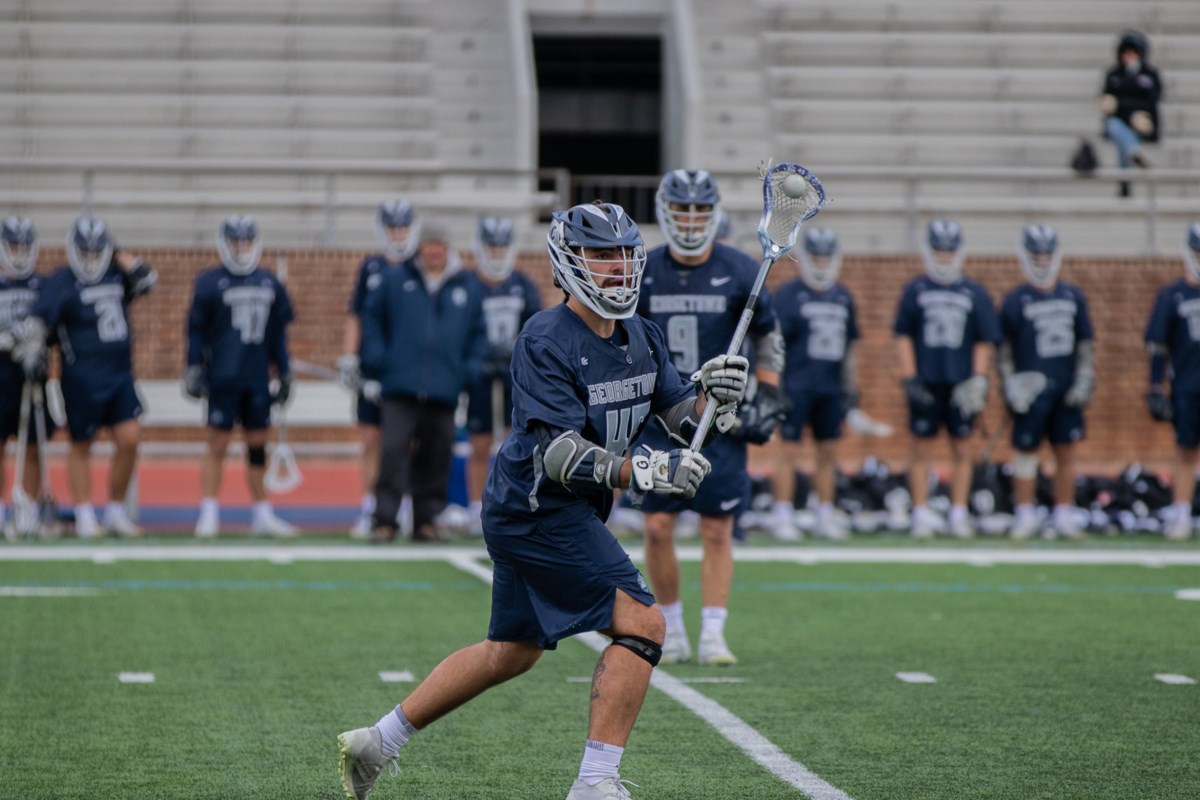 Dylan Watson is projected to be a high pick in this year’s National Lacrosse League (NLL) draft.

However, the Guelph native isn’t wasting much time thinking about that.

“I have no real control in the draft or what happens,” Watson said during a video conference. “I’ll just be very happy wherever I end up and whatever happens. The goal is to hopefully make the roster wherever I go and start contributing from Year One. I’m definitely looking forward to that draft day and seeing where I end up.”

Watson, who’ll turn 22 at the beginning of May, is in his fourth and final season of NCAA field lacrosse with the Georgetown Hoyas and that season comes first.

“I couldn’t care less about personal stats and whatnot as long as the team is doing well, things are good and the boys are happy,” he said. “Team success comes first. All the other personal accolades and whatever doesn’t even matter to me. Personally, it’s just team success and hopefully raising that special trophy at the end of the year. That’s the goal.”

The five-foot-10, 190-pound attack player does have a knack for scoring goals.

Georgetown has played two games this season, won both and Watson started both and collected a total of eight goals on 20 shots.

“I like to just catch and shoot and also create space for other guys in whatever way I can – through setting picks or just like cutting at certain times,” he said.

The scoring is nothing new. He had 20 goals and seven assists last year in a season that was limited to nine games due to a hand injury. In a shortened 2020 season due to the pandemic, Watson had 23 goals and two assists in six games and he had 18 goals and five assists in 18 games in 2019, his freshman year.

“I broke my hand,” he said of last year’s injury. “I’m still not sure how it happened, but I ended up breaking a piece of bone in my hand so I had to get that removed. That was a bit of a bummer, but I got through it and I was able to get back for the second half of the season. We went on a bit of a run there, but unfortunately things didn’t go the way we wanted them to.”

The Hoyas were Big East champions and ranked sixth when they lost to fourth-ranked Virginia 14-3 in the national quarter-finals. Virginia was the fourth consecutive nationally-ranked team Georgetown played and they won the other three, including an 18-8 win over #11 Syracuse in the first round of NCAA tournament.

“We’re hoping to go a little bit further this year, learning from what happened last year and build on that. (We want to) keep that in the back of our heads because we don’t want that feeling again,” Watson said. “We’ve just got to keep that feeling in our minds and make sure we push forward and that we accomplish our goals.”

That Watson is an attack player might be surprising as he’s the son of legendary Toronto Rock goaltender Bob Watson, who’s in the NLL hall of fame (right after his retirement in 2011) and the Canadian Lacrosse Hall of Fame (last year).

So why didn’t he end up being a goaltender like his father or his sister Sydney who tends goal in Ontario university women’s lacrosse play for the Laurier Golden Hawks?

“It’s kind of funny. I always get that question,” Dylan said. “My dad’s usually around when I get those questions and he usually says ‘I guess he’s the smarter one.’ Just growing up, learning from him especially of what he was able to accomplish is something that is honestly very astonishing and ridiculous.”

Having an all-world goaltender to shoot against at home as well as hanging out with the Toronto Rock at practices a day or two a week could do nothing but help an aspiring player.

“I could pick his mind as a young kid as where to shoot, different technique that I should use to change my angle, making sure everything looks the same but being able to place it in different spots,” Dylan said. “Also just being around the rink with Colin Doyle, Josh Sanderson and guys like that – just picking their brains a little bit, too, and learning from watching and idolizing then growing up.

“I was very fortunate to have the upbringing I did and I was able to pick a lot of the minds of great players, just seeing what they do.

“Ultimately, it helped me become the player I’ve become today and I just want to keep growing and hopefully put a couple more balls in the back of the net this season.”

Dylan attended Bishop Macdonell Catholic High School for a couple of years before transferring to The Hill Academy in Caledon for two years.

A marketing/marketing management student, Dylan has been a member of the Big East Conference’s all-academic team each of his first three years on the Georgetown campus in Washington, D.C.

“It was a little bit of an adjustment my freshman year,” he said. “When I came in, I didn’t even know what a GPA (grade point average) was. I was just trying to figure out everything.”

NCAA lacrosse is field lacrosse and Dylan didn’t have much experience at it before attending Georgetown. That, however, is usually the way for Canadian players who spend most of their summers playing the indoor box lacrosse game. The NLL is box lacrosse.

“I didn’t really pick up field lacrosse until I was 11 or 12,” he said. “It was definitely a whole new sport. It’s still lacrosse in a sense, but also in another sense it’s a completely different sport. It’s definitely something that took time and a lot of practice to get used to. There’s more space, bigger nets, smaller goalies. It’s every box player’s dream to have that so that part was pretty nice. It’s a lot more of a methodical game. You’ve got to think a lot more. In box, everything is go go go. You’ve got to make stuff happen. (In field lacrosse) you’ve got to slow things down, take your time.”

No matter what happens in the NLL draft, Dylan plans to head west for a season of major lacrosse this summer. A graduate of the Guelph Minor Lacrosse Association, he collected 74 goals and 58 assists in 51 games of junior A lacrosse in four seasons with the Orangeville Northmen. But the west beckons.

“The plan is to go out west so hopefully I’m going to go play out there because that was my dad’s kind of biggest regret that he didn’t do when he was young,” Dylan said. “I’m going to go try to do that and we’ll see what happens with that. It should be pretty good.

“The lacrosse is more or less the same. It’s just to go to get a different experience. I’ve kind of been in Ontario or down here my whole life so it’s just to get another experience.”

But the Hoyas’ season comes first.

“Hopefully we’re the ones with the trophy over our heads at the end of the year.”