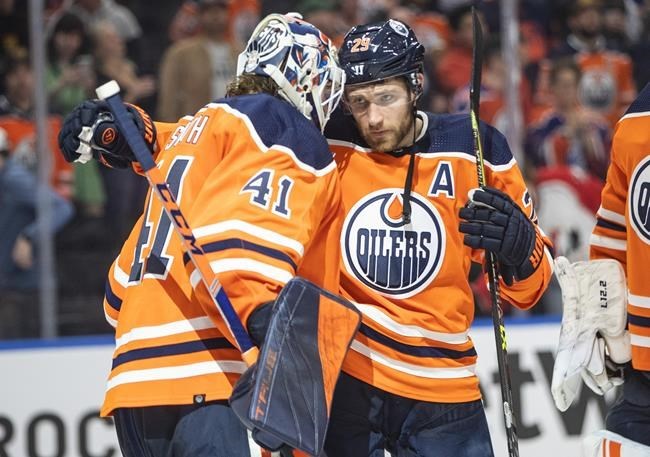 EDMONTON — The Edmonton Oilers finally showed what they could look like playing a complete game.

EDMONTON — The Edmonton Oilers finally showed what they could look like playing a complete game.

Kailer Yamamoto, Connor McDavid and Tyson Barrie each had a goal and an assist as the Oilers won their fourth in a row, defeating the Buffalo Sabres 6-1 on Thursday.

“It was a full 60 minutes. It was maybe as good of a game as we have played all year,” Barrie said. “After two periods we realized that we had played a pretty solid game up to that point and we made a point of coming out and drilling home that last 20 minutes to show us what it feels like to play the full game.”

Leon Draisaitl, Darnell Nurse and Devin Shore also scored for the Oilers (34-23-4) who have gone 4-0 on a key five-game homestand.

“I thought we got contributions from everybody,” Oilers head coach Jay Woodcroft said. “All four lines, three D-pairs, Mike Smith was excellent, the penalty kill was good, we got a shorthanded goal and we scored a power play goal. All facets of the game seemed to be firing on all cylinders.”

“We didn’t win any battles from the start, we made it really hard on ourselves,” Olofsson said. “They’ve got some really skilled players. We had to get pucks deep and win our battles and obviously we didn’t do that and I think that kind of showed up.”

The Oilers started the scoring 7:21 into the opening period as Yamamoto pounced on a loose puck in front and snapped a shot high to the glove side past Sabres starter Craig Anderson, giving him goals in four straight games and 15 on the season. Edmonton came into the game with a 19-0 record when scoring first this year.

Edmonton added to its lead with seven minutes left in the first period as McDavid had a pass bounce back to him and he tucked it in at the side of the net. It was also the fourth straight game The Oilers’ captain has scored in, putting him at 34 on the season.

The Oilers made it 3-0 nine minutes into the middle frame when Draisaitl scored is 40th on a tremendous second effort to put in his own rebound in tight. Draisaitl became the fastest Oilers player to score 40 goals in a season since Jimmy Carson in 1988-89.

Edmonton took a four-goal lead with six minutes left in the second when Nurse snuck through a shot after sustained pressure.

Buffalo finally got on the board three minutes into the third as Olofsson sent a one-timer rocket past Oilers goalie Mike Smith, who would go on to earn his first win since Feb. 17.

The Oilers got that goal back a few minutes later as Tyson Barrie sent a long pass up to spring Shore for a shorthanded breakaway goal.

Edmonton scored a power-play goal with four minutes left when Barrie activated from the blueline to score his fourth.

The Sabres are right back at it on Friday as they head to Calgary to face the Flames. Edmonton closes out a five-game homestand against the New Jersey Devils on Saturday.

Notes: Both teams had players return from lengthy injuries. Returning for the Oilers after missing 12 games was Jesse Puljujarvi and Kris Russell, who missed 19 games. Buffalo’s Colin Miller came back after 23 games, while Zemgus Girgensons returned after being absent for 18… Still out for Edmonton is Ryan Nugent-Hopkins (upper body) and Kyle Turris (upper body), while the Sabres have Will Butcher (lower body), Drake Caggiula (upper body) and Casey Fitzgerald (lower body) injured… The game featured the two oldest goalies facing each other in Anderson (40 years, 301 days) and Smith (39, 360 days) since 2012. It was Anderson’s 633rd career start and Smith’s 634th.

This report by The Canadian Press was first published March 17, 2022.