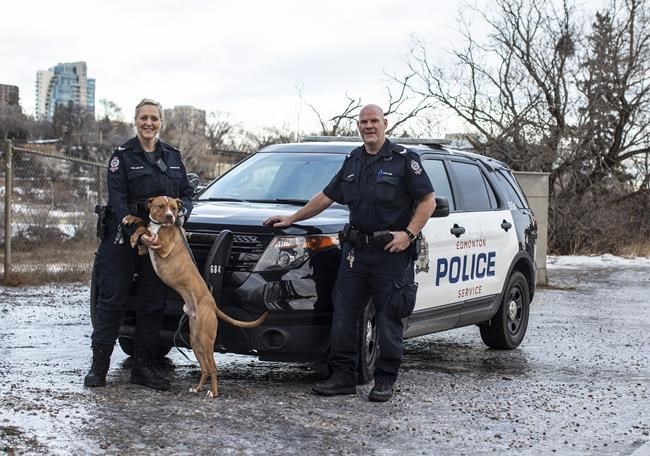 EDMONTON, United Kingdom — It started with a puppy they named Tucker. In 2017, constables Ilka Cunningham and Ted Dyck with the Edmonton Police Service were sent to an animal cruelty call and found a puppy that had been beaten.

EDMONTON, United Kingdom — It started with a puppy they named Tucker.

In 2017, constables Ilka Cunningham and Ted Dyck with the Edmonton Police Service were sent to an animal cruelty call and found a puppy that had been beaten.

“When we seized (the puppy), I noticed that one of his eyes was quite bloodshot,” Cunningham said.

“We took him to the emergency vet and (the pup) had some trauma to his eye from probably being punched or kicked.”

She said the dog got its name because of how “tuckered out” he looked when they were driving him to the veterinary clinic.

“We had a ride-along with us that day who was holding him in his arms, and the puppy … melted into his arms and fell asleep.”

The pit bull mix made a full recovery, but Dyck said he and his partner made a lot of mistakes in the investigation.

“We didn’t get any veterinary statements and the biggest thing is that we didn’t know anything about the provincial Animal Protection Act,” said Dyck, who, with Cunningham, now leads the police force’s animal cruelty investigations unit.

It officially formed in May and is believed to be the first of its kind in Canada.

Cunningham said Tucker’s case would have been “bulletproof” if the officers had been trained to deal with animal cruelty files and known what is needed to prosecute abusers.

“We did get a conviction, but it certainly wasn’t jail time or a very high fine,” she said.

Tucker was the catalyst for them to take on more animal abuse cases.

“We were still front-line patrol members, but we were doing these animal files off the side of our desk,” Dyck said.

He and Cunningham reached out to police services throughout Canada for advice, but couldn’t find a dedicated unit for animal cruelty investigations.

They expanded their search to south of the border, where they worked with police in Los Angeles, San Francisco and Houston, Dyck said.

In many parts of Canada, abuse files are often handled by animal welfare groups and city workers. But they do not have the same investigative resources as police for serious cases, Cunningham said, and in Alberta do not have the power to lay criminal charges.

Kendra Coulter, an associate professor of labour studies at Brock University in St. Catharines, Ont.,said research around the world has shown that there can be links between animal cruelty and violence against people.

“Animal cruelty issues can be just the tip of a much more dangerous iceberg,” she said. “It can be happening before other kinds of crimes or alongside.”

In 2019, the Ontario Society for the Prevention of Cruelty to Animals announced it would no longer enforce cruelty laws, which it had been doing for more than a century. That same year, an Ontario judge struck down the society’senforcement powers as unconstitutional. The judge said the province made a mistake when it gave policing powers to a private organization without requiring accountability and transparency standards.

That prompted Coulter to do an online survey of 20,000 Ontarians about animal cruelty laws. It found that 90 per cent of those polled wanted police to enforce the rules.

“Canada’s enforcement when it comes to animal cruelty laws is a patchwork of patchworks,” Coulter said.

“Who is going to be doing the investigation really varies depending on where you are in the country, where you are within a specific province, what kind of animals are involved, and even what day of the week it is.”

All those factors can be frustrating for people who want to report animal abuse, she said.

“More often than not, the answer is, not necessarily.”

Coulter commends the work Dyck and Cunningham are doing and suggests the unit is a good model for other jurisdictions to follow.

The two constables have taken part in training others in the force. They said officers from other police services have also requested training.

They say what keeps them going through the roughest cases is their love for animals and dedication to protecting society’s vulnerable creatures.

Cunningham said they keep in touch with many families who adopt rescued animals, including Tucker. They have a wall in their office of all the photos and cards sent to them of animals now in loving homes.

“We see a lot of terrible and negative things, so it’s nice to see some of the positive of it.”

This report by The Canadian Press was first published Dec. 18, 2021.