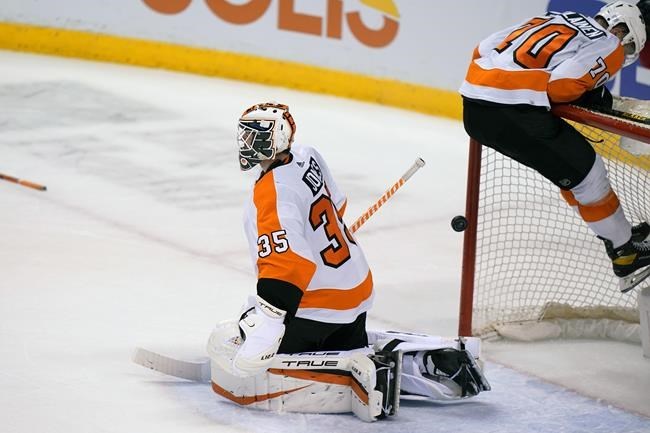 After a faceoff win in the 3-on-3 session, Ekblad worked a give-and-go with Jonathan Huberdeau, zipping in the winner from the low slot for his sixth of the season.

Sam Bennett had a goal and an assist, and Anthony Duclair and Ekblad dished out assists for Florida, which won its fourth straight and is 8-2-1 against the Metropolitan Division.

Sergei Bobrovsky made 32 saves and became the first Florida goalie to record points in 11 straight starts (9-0-2).

Joel Farabee broke a five-game streak without a goal with his first-period marker, and Travis Konecny and Ivan Provorov had assists for the Flyers, who dropped their fourth straight (0-3-1).

With Carter Hart starting in net in Tuesday night’s 4-0 loss in Tampa, Martin Jones took the crease and made 43 saves.

The Panthers could not take advantage of total puck possession and offensive zone time over the opening seven minutes.

After Jones stopped Huberdeau on a 2-on-1, Farabee took a stretch pass from Konecny and scored his fifth on a breakaway at 7:33.

In a second period that was not as uptempo as the first, Florida killed off the only penalty, but Jones continued to thwart the high-scoring Panthers by stopping all eight shots as the Flyers played a second consecutive penalty-free frame.

Jones’ best save was on Sam Reinhart’s backhander at 7:32 as the goalie got his stick out and deflected the puck above the crossbar.

The tally snapped a seven-game skid without scoring on the power play.

Flyers D Keith Yandle, who spent the previous five seasons with Florida, faced the Panthers for the first time since March 21, 2016. Yandle appeared in his 940th consecutive game, putting him within 24 of matching Doug Jarvis’ NHL record. Yandle’s games-played streak is the second longest in NHL history.

NOTES: The Flyers have the NHL record for longest home unbeaten streak to begin a season, a 26-game run in which they went 19-0-7 at The Spectrum to begin the 1979-80 season. … Philadelphia hadn’t played at Florida since Feb. 13, 2020. The teams meet only one more time this season, back in Sunrise on March 10. … After a quick trip to Carolina, the Panthers return home Saturday for their first-ever meeting with the Seattle Kraken. It’ll be the start of a four-game homestand.