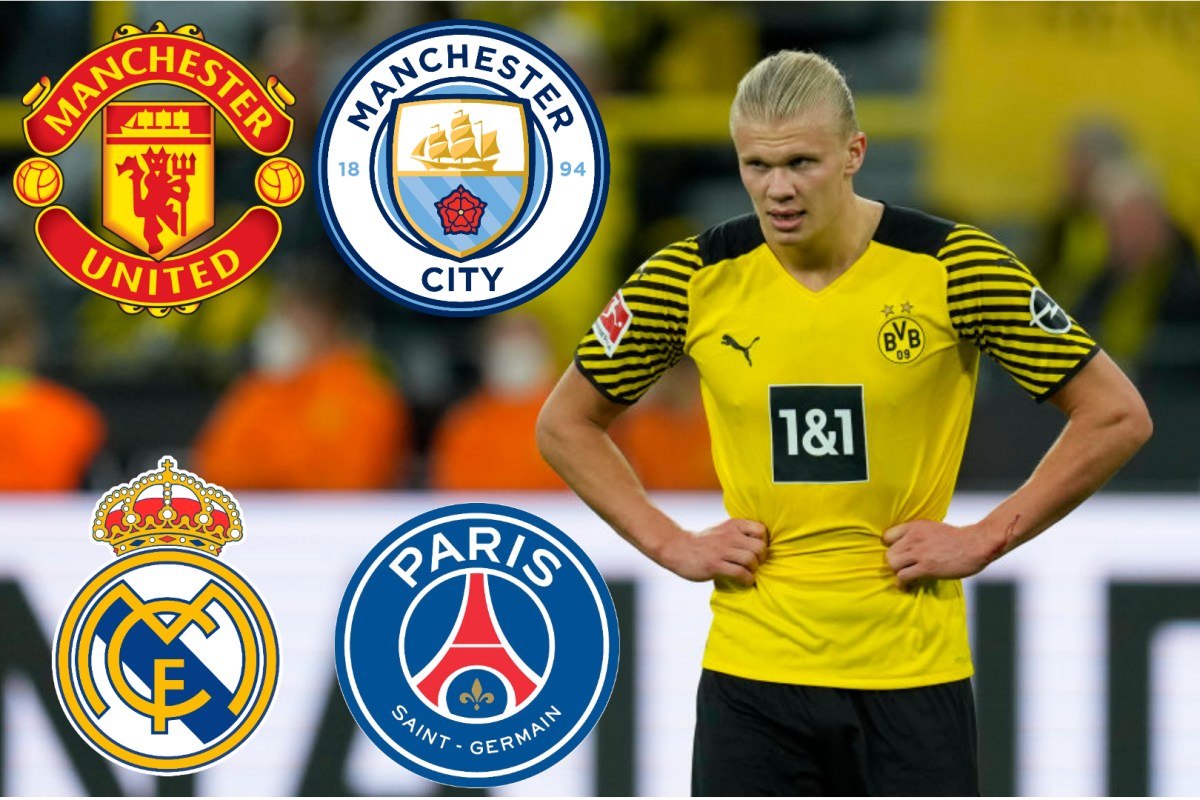 Erling Haaland is one of the biggest names in world football right now and the transfer speculation surrounding him will only intensify in the coming weeks and months.

The 21-year-old striker has only been at Borussia Dortmund for two years but already fired in 76 goals in just 74 games.

Dortmund will be desperate for him to stay and even though he has a contract until 2024, they will be powerless to stop him leaving.

That is because of a £68million release clause in that contract, which they agreed to when they signing him from Red Bull Salzburg.

Just about every top club in Europe is clamouring for Haaland’s signature and it is easy to see why.

Though the transfer fee is relatively low for a player of his quality, the true cost of his transfer will be much higher when factoring in his reported wage demands, said to be in excess of £500,000-a-week.

At 6ft 4in, he is tall and powerful with the capability of devastating any defence around – and has an incredible eye for goal.

Here, talkSPORT.com looks at the leading candidates to sign him and the best fit for him.

There are plenty of reasons why Haaland may be enticed by the prospect of joining the Manchester club, but also some downsides.

The club are currently managed by Ralf Rangnick, on an interim basis, and he is the man who brought him to Red Bull Salzburg from Molde.

Haaland’s former teammate Jadon Sancho is also at the club and the pair had a brilliant relationship.

Sancho may have struggled so far, but they would no doubt enjoy playing in the same side together.

With the likes of Mason Greenwood and Marcus Rashford also in the squad, there is the potential to build a strong team for the future.

A club of the stature of United would likely be able to afford his wages, while also will no doubt help grow his personal brand.

But United are a team in crisis right now and have a real fight on their hands to get Champions League football.

Haaland may need a lot of convincing to join them should they miss out.

Cristiano Ronaldo is also still at the club, meaning he would also have someone else to compete with on the goals front.

If Haaland wants to join a club where he will be competing for league titles and Champions Leagues immediately, then Liverpool could be an ideal landing spot.

The Reds won the trophy two seasons ago, while made the final the year before, and are also recent Premier League winners.

There are some doubts over Mohamed Salah’s future as he is yet to sign a new contract with the club, and that could open the door for a new superstar.

Even if Salah stays then him playing in a front three alongside Haaland and Mane would rival any attack in world football.

The Reds may have a decision to make this summer about whether to pursue the striker and give in to his huge wage demands, or make keeping Salah their top priority.

But how often does a generational talent like Haaland come on the market?

Like Liverpool, City would be ready made for Haaland to come in a challenge for trophies.

Pep Guardiola’s side are arguably the best in Europe right now and have a vacancy at centre-forward.

Sergio Aguero was never replaced in the summer, although they have not struggled for goals at all this season.

There are no doubts that City could afford his price tag and wage demands and the playing style could suit him perfectly.

With the likes of Kevin De Bruyne, Jack Grealish, Phil Foden, Bernardo Silva and Riyad Mahrez all feeding him the ball, he has the chance to score an obscene amount of goals.

His father, Alf-Inge, also played for the club and may be a massive help in signing him.

City may still harbour interest in Harry Kane, though, which could scupper any deal to bring him to the blue half of Manchester.

The Blues really should not be on the list considering they splashed out nearly £100million on a striker last summer.

Romelu Lukaku was their marquee signing from Inter Milan and they should be having no problems in that department.

But the Belgian striker has been in and out of the team and his controversial interview may have soured his relationship with Chelsea.

Bild report that the incident this week could have an impact on their pursuit of Haaland.

Although Lukaku has apologised, doubts may start creeping in and it remains to be seen if the fans will so easily forgive and forget.

Chelsea no doubt have the financial muscle to complete a deal for Haaland, but if Lukaku stays then it is hard to see how they would both fit into the same line-up.

Apart from the presence of Lukaku, Stamford Bridge would be an attractive prospect with a top coach in Thomas Tuchel at the helm.

The Blues also have a glut of young, attacking talent who can provide him with plenty of opportunities in front of goal.

Chelsea continue to invest in most transfer windows and will also provide Haaland with opportunities to win titles.

Madrid love a Galatico signing and Haaland could be their poster boy for the new generation of stars.

It has been a time of transition following the departure of a number of club legends in recent seasons like Cristiano Ronaldo and Sergio Ramos.

Karim Benzema is 34, but still as good as ever, and they will be looking to sign stars for now and the future.

Madrid can offer Haaland the gravitas he perhaps deserves and there are some exciting young players in their ranks that he can grow with.

The Spanish club have also been heavily linked with Kylian Mbappe, who is a free agent in the summer, and may be forced to choose between the two.

The expiration of the contracts of Gareth Bale, Isco and Marcelo are likely to free up wage space to sign one or the other.

Benzema is not going anywhere and he may have to fight for goals alongside the France striker should he join.

Haaland would be a good fit for Real Madrid, but Florentino Perez famously does not get on well with the player’s agent Mino Raiola and that may prove a stumbling block.

Madrid’s rivals Barca will not sit idly by while they go and sign a number of big name stars.

The pursuit of Haaland may ignite the bitter rivalry between the two clubs, with both falling off the boil over the last year.

They missed out on LaLiga to Atletico Madrid and made Barca even dropped out of the Champions League to the Europa League.

Club legend Xavi has been hired and has already signed Ferran Torres from Man City.

Now they will want a big name to herald in their new era and Haaland could be the man they are looking for.

President Joan Laporta will be aggressive in the transfer market in trying to the Norwegian striker.

But the huge issue at the moment with Barca is money. They haven’t got much of it.