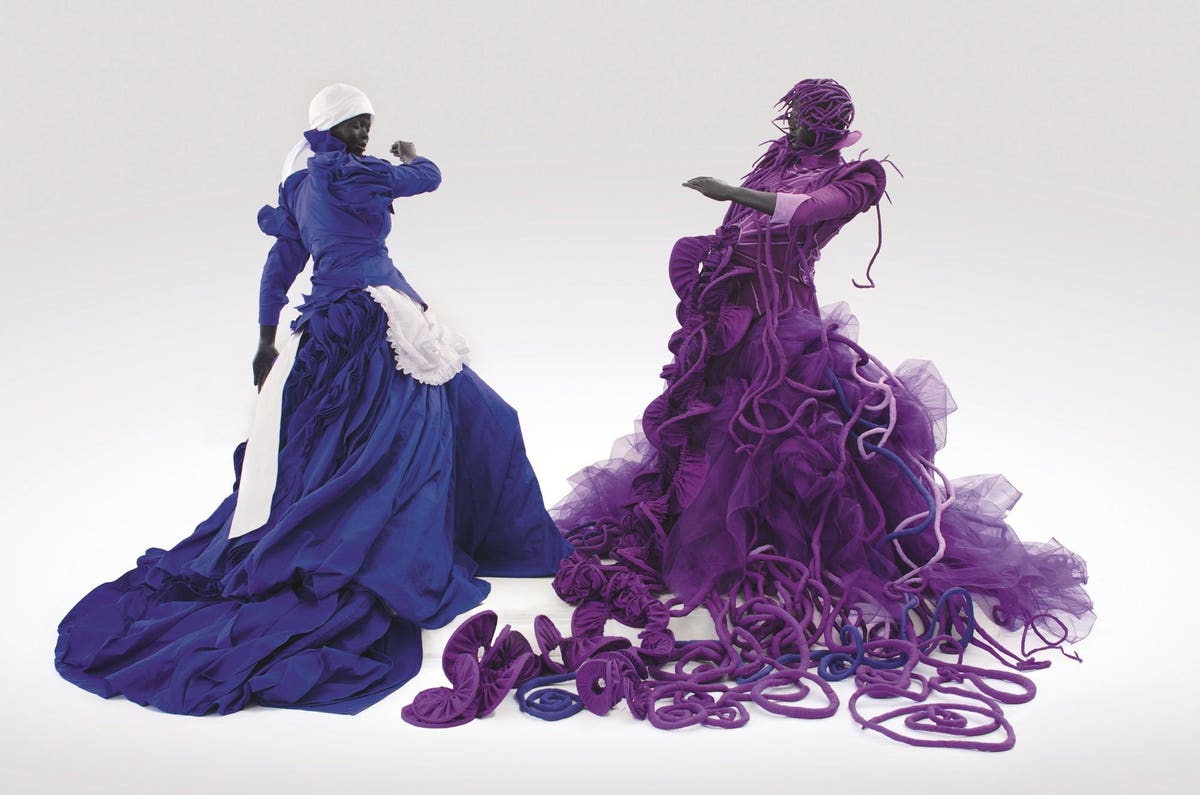 Wearing a floor-sweeping royal blue gown with a white apron and white head scarf, domestic worker Sophie encounters her twin, clad in a flowing purple gown with a pop of royal blue. The women appear shocked, arms in motion as if they’re about to strike each other.

Sophie represents Johannesburg, South Africa-based artist Mary Sibande’s alter ego. Besides being the chosen color of power-hungry European royals and clerics, purple, for Sibande, references a 1989 freedom march in Cape Town, amid the final years of apartheid. Police sprayed protesters with purple dye, making them easy to identify and arrest. Following the Purple Rain Protests, graffiti artists began tagging the phrase “the purple shall govern” throughout the port city, building on the ubiquitous opening demand of the 1955 Freedom Charter: “The People Shall Govern!” The Freedom Charter outlined the core principles of the South African Congress Alliance, including the African National Congress (ANC) and its allies: the South African Indian Congress, the South African Congress of Democrats, and the Coloured People’s Congress.

The fluidity of the gowns and the womens’ poses suggest a revolutionary spirit, ready for action and change. Sibande’s A Reversed Retrogress: Scene 1 (2013), depicting two life-size fiberglass mannequins and cotton textile, is among the featured work by more than 300 modern and contemporary artists born or based in Africa, curated and chronicled in Phaidon’s African Artists: From 1882 to Now.

Travel to Abidjan, the chief port, de facto capital, and largest city of Côte d’Ivoire (Ivory Coast), lying against the Ébrié Lagoon, which is detached from the Gulf of Guinea and the Atlantic by the Vridi Plage sandbar. Artist Abdoulaye Diarrassouba, known as Aboudia, takes us on a captivating visual journey to the bustling streets of his birthplace, one of the most populous French-speaking cities in Africa.

Referencing the symbols and writing of Jean-Michel Basquiat, Aboudia elegantly and viscerally blends graffiti and traditional African carvings in the large-scale acrylic and mixed media on canvas, 29. Aboudia exposes the brutality of living in Abidjan through skull, soldier, and bullet motifs, juxtaposed with bright colors to convey the vigor of youth.

Born in Gutu, Zimbabwe, in 1993, Kudzanai-Violet Hwami lived in South Africa throughout her youth, from age 9 to 17, compelling her to convey an honest, intimate portrayal of Southern African life. Bold colors and an array of brushstrokes guide our gaze of the monumental Family Portrait (2017). Sinister themes emerge as we examine the richly layered acrylic and oil on canvas, a Black child’s face erased with white scratch marks.

Hwami’s exploration of the Black body and its representations is essential to understanding contemporary art at a global scale. Her work borrows from myriad diverse influences – music ranging from Zim Heavy (a “heavy rock” genre from Zimbabwe) and Afrobeats (an amalgam of West African fuji music and highlife, and American jazz, soul, and funk) and literary and psychological writings by Aleksandr Solzhenitsyn and Carl Jung – to guide us along these complex histories and identities.

As the art market pounces on gains to be made off African artists, this Phaidon survey reminds of their vast and enduring impact on art history, from modernism among the avant-garde working in the United States to nearly every European master (Maurice de Vlaminck, André Derain, Picasso, and Amedeo Modigliani).