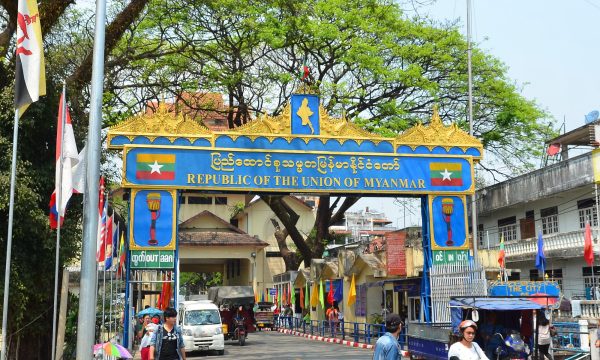 The border crossing between Mae Sae, Thailand, and Tachileik, Myanmar.

It is not an exaggeration to say that Myanmar is now in a state of civil war. The February 1 coup staged by Myanmar’s armed forces, the Tatmadaw, against the elected government of Aung San Suu Kyi sparked a massive civil disobedience movement which subsequently led to a violent crackdown. Many protesters recognize that non-violent methods are ineffective against the Tatmadaw and have taken up arms. Meanwhile, over 20 ethnic insurgencies across Myanmar have exploited the ongoing turmoil to expand their territories and consolidate local power. With no end in sight, more and more people are trying to find safe havens in neighboring Thailand.

Last week, at least 2,500 Myanmar villagers fled to Thailand following the deadly clash between the Tatmadaw and the anti-junta forces. The new influx puts extra pressure on Thai authorities, who are already burdened with around 91,411 Myanmar refugees. Asylum seekers from Myanmar are confined within the nine government-run “temporary shelters” along the Thai-Myanmar border with no prospect for local integration. Thailand, as a non-signatory to the 1951 Refugee Convention, lacks domestic laws to grant any legal status to refugees and has instead focused on “voluntary return” and “third country resettlement” approaches. This explains why many Myanmar refugees have remained in the shelters since the 8888 Uprising over 30 years ago.

It is imperative for Thai leaders to step up efforts to help resolve the Myanmar crisis and prevent a humanitarian catastrophe that will overwhelm Thailand’s existing facilities. Thailand could be in serious trouble if the Myanmar population in Thailand – both the incoming refugees and over 2.3 million registered migrants who make up more than 10 percent of Thailand’s workforce – becomes hostile over restricted freedom and the lack of future prospects. And, given that Thailand shares a porous 2,401-​​kilometer border with Myanmar, it is very difficult to detect unauthorized entries, which are often connected to drug and human trafficking. Further adding to the security challenges, it is believed that Myanmar’s COVID-19 testing and vaccination coverage are low.

Despite Thailand’s large stake in the Myanmar conflict, the Thai government under Prayut Chan-o-cha’s leadership has refrained from criticizing the junta and has maintained a cautious stance. As highlighted through a series of friendly exchanges between top officials from Thailand and Myanmar, the Thai government is determined to engage in quiet diplomacy with Myanmar’s junta to find a peaceful solution. This marks a stark contrast with a more assertive stance adopted by the other four founding ASEAN nations – Indonesia, Malaysia, the Philippines, and Singapore – who are becoming increasingly concerned about ASEAN’s credibility.

The brotherhood between Thailand and Myanmar’s militaries very obviously contributes to Thailand’s quiet diplomacy. Thailand and Myanmar may have been arch-enemies back in ancient days, but the two countries’ militaries have bonded in modern times over similar histories of military intervention in politics. Myanmar army chief Senior Gen. Min Aung Hlaing’s letter to Prayut shortly after the February coup, together with his personal ties to the late Gen. Prem Tinsulanonda, who is honored as one of Thailand’s most influential statesmen, has often been cited to illustrate close relations between military leaders in the two nations.

What is often not discussed, however, is that Thai officials genuinely believe that backdoor diplomacy to build trust is the best solution to the Myanmar crisis. The prideful Tatmadaw has remained resilient against persistent domestic ethnic conflicts and years of international sanctions – much like the Kim regime in North Korea. Moreover, the Tatmadaw’s organizational structure and military tradition, which stresses rigid discipline and unwavering loyalty, have been inspired by the Imperial Japanese Army and the bushido code of the Samurai warriors. Thus, from the Thai perspective, portraying Myanmar’s junta as “weak” or “submissive” to international coercion can be counterproductive to the peace process.

While Thailand recognizes that ASEAN must take strong actions against Myanmar’s junta to uphold its credibility, Thai leaders appear to prioritize ASEAN’s tradition of non-interference in the internal affairs of member states. Thailand’s choice is to be expected, considering that Prayut himself rose to power via a coup and the kingdom has many unresolved domestic issues on its plate. Thailand’s overt and active intervention in Myanmar will not sit well with Thai citizens, particularly the pro-democracy protesters, who are demanding for Thailand’s own political and socioeconomic reforms. Against the backdrop of growing public discontent and approaching elections, the ruling Thai government will most likely continue to maintain a low-profile on the Myanmar conflict.

As a front-line state with close connections to Myanmar’s junta, Thailand, more than any other nation in Southeast Asia, has the potential to help pull Myanmar back from total chaos. Thailand’s commitment to restore peace in Myanmar is demonstrated in its continuous pursuit of quiet diplomacy. Nevertheless, this discrete approach has its limits and may take too long to yield fruitful results. Thailand’s silence can also be interpreted as a form of support for Myanmar’s junta, which could further diminish Thailand’s regional leadership.